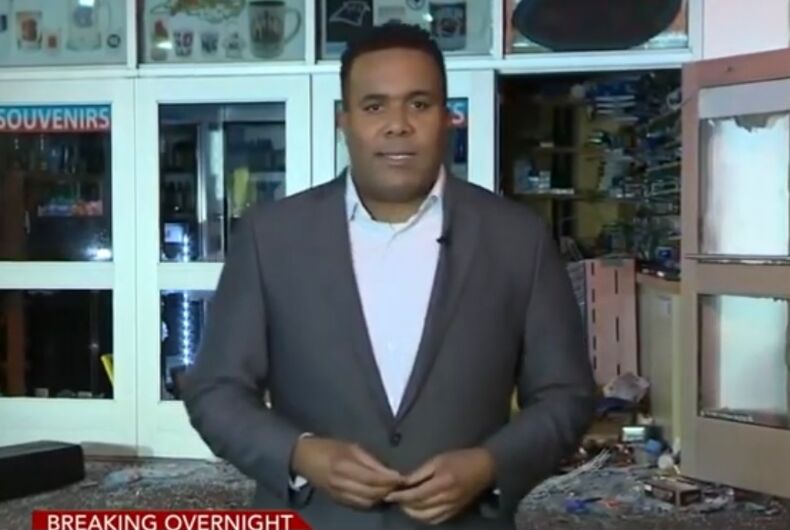 A TV journalist is speaking out about the racist and homophobic discrimination he faced – which included being forced to “butch it up” on air – that caused so much stress he even suffered from medical problems.

“I distinctly remember the voice coach telling me during one session that she was confused about what problem the station had with my voice. Looking back, I now know ‘presence’ and ‘voice’ were code,” says Don Champion, who was a freelance reporter at WCBS in New York before becoming a CBS News correspondent. “I was too gay.”

The story he shared focused on two executives at the CBS News organization, Peter Dunn and David Friend, who were the subject of a recent investigation by the Los Angeles Times that revealed years of allegations of racism against them.

But, as Champion explains, the discrimination he faced in the company didn’t end there.

The bigots are in your building. Do something. 👀 https://t.co/4hkyUK5x4v

I keep “Former CBS News Correspondent” in my bio because I’m proud of what I accomplished. But the truth is working there was incredibly difficult and painful. Given the events of this week- I want to share my WCBS-TV/CBS News story. https://t.co/Uqs1Tzwbhu

Champion prefaces a picture of him preparing to go on-air with, “On one hand, it makes me feel proud that as a news reporter I got the chance to cover huge stories in NYC – the largest and most dynamic market in the country. On the other, it brings back horrible memories of being bullied and discriminated against for being a gay Black man.”

He continues, “I look back and often feel [naïve] for not thinking it could happen. I can honestly say I’ve never been discriminated against in the way David Friend and Peter Dunn did me at WCBS-TV.”

“Even before I started, my agent warned me, ‘Be careful, you’re gay, Black, and a man. David doesn’t like any of those.'”

Champion explains that when he was first asked to be an on-air freelancer for CBS in New York in 2013, he expected to get the opportunity to prove himself enough to earn a contract, as was typical “in those days.”

But Dunn and Friend had different ideas.

“In the months that followed my start at WCBS, David Friend would use that freelancer status as a tool to bully, intimidate, and tear me down – not only as a reporter but also as a human. I was so stressed working at WCBS I even developed eczema,” Champion reveals.

Even after scoring an exclusive story on his first day on-air, Champion claims that “nothing I could do would impress” Friend.

“His first complaint was my ‘on-air presence.’ Months later it was my ‘voice,'” Champion writes, adding that he tried to accommodate the complaints: “When I went to his office and asked for help paying for a voice coach he said no. Trying to do whatever it took to get a contract, I paid for one on my own.”

“By the end of my time at WCBS about a year and a half later I was asked if I had ‘gained weight,'” Champion adds. “There. Was. Always. An. Excuse.”

Others in the newsroom, including other executives and other journalists of color, were aware of Dunn and Friend’s alleged discriminatory attitudes. Still, their racist attitudes continued, even after a Black firefighter died defending Friend’s home from a fire, according to what Champion heard.

“The number of days WCBS offered me to work each week ebbed and flowed – depending on how David felt about me. My life and career were under the control of a bigot.”

Eventually, Champion was told “[Friend] didn’t feel like ‘stringing me along anymore’ and wouldn’t offer me any more freelance days after the end of the month.”

So Champion had begun freelancing elsewhere, including at CBS Newspath, the company’s national satellite-broadcast news outlet. So when Friend had a “change of heart” after other executives persuaded him to keep Champion, the journalist turned them down — with pride.

“Before I left, a manager at WCBS even said to me that they hoped I ‘knew the problem [at WCBS] was never you.’ Those words have stayed in my head ever since,” Champion reflects. Afterwards, though, his time at CBS Newspath was not much better. Champion talks about how “word from a manager of me needing to ‘butch it up’ on-air got to me. There was also a complaint about me ‘queening out’ during live shots.”

“When I confided in my VP about this during an incredibly uncomfortable and awkward conversation – she viciously turned against me after being one of my biggest supporters,” he writes. Months later, the executives at Newspath ended his contract early, allegedly because he “wasn’t [the VP’s] style.”

Following requests from Yahoo! Life, Friend “declines to respond to every false insinuation and suggestion, from Mr. Champion,” but says Champion’s statements are “based on nothing but conjecture,” according to a statement through an attorney. Dunn did not comment.

Both have been placed on leave since Champion’s story and those covered by the Times were revealed. Champion doesn’t find them to be enough.

Ever since the end of his time at CBS, Champion moved to Seattle and also had a brief stint in London. He’s now an avid traveler working at Amazon and has started a YouTube channel.

Although he’s speaking up about his experiences now, he writes, “Looking back, I have regrets. I wish I would’ve sued.”

“I wish I would’ve stood up for myself more, but there’s so much fear involved. I’ve been incredibly blessed in the few years since I left news and it’s all reinforced my faith that everything happens for a reason. It’s taken a lot of work to heal, though.”

This isn’t enough. This is the very weak response from CBS that’s enabled these men to become the monsters they are. https://t.co/iJZCVvNGvb

Overwhelmed by the response today. Thank you for all the words of support- I truly appreciate it. I spoke up for my former colleagues who are still in fear and for all those in news who can't talk. The reckoning needs to continue.

This is my CBS story… I’ve reflected on this photo often in recent years. On one hand, it makes me feel proud that as…