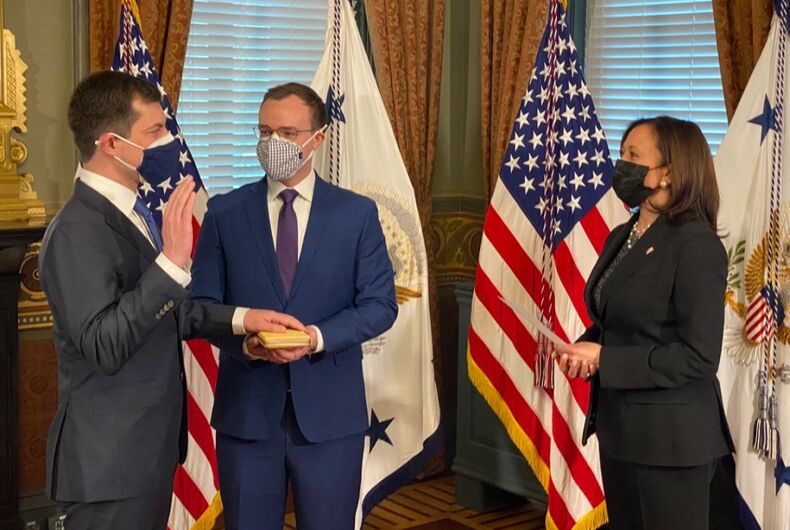 Pete Buttigieg getting sworn in by Kamala Harris with Chasten Buttigieg by his side.Photo: Office of the Vice President

In the masked ceremony, Harris led Buttigieg through the oath as he swore to support and defend the Constitution. Harris cheerfully congratulated him afterward and then elbow-bumped Chasten, because of COVID-19 protocols.

IT'S A HISTORIC MOMENT!!! Pete Buttigieg get sworn in as the Secretary of Transportation by Vice President Harris. pic.twitter.com/7aiG7YIY7a

Afterward, Pete Buttigieg hugged his husband moments after he became the first out Cabinet Secretary.

On Twitter, Harris’s office released photos of the ceremony.

The @VP swears in @PeteButtigieg as Secretary of @USDOT with special appearance by @SecondGentleman and @Chasten pic.twitter.com/a8SUhSYLYi

Journalists and photographers in attendance also shared pictures of the historic moment.

.@KamalaHarris elbow bumps @Chasten after he holds the Bible for his husband @PeteButtigieg during his swearing in ceremony for transportation secretary pic.twitter.com/jZhOAIqAgZ

In a short ceremony, @PeteButtigieg is sworn in as Transportation secretary—he’s the 2nd presidential competitor in Biden’s cabinet (winner of Iowa caucuses), and 2nd openly gay member of any president’s cabinet. He was sworn in on a Bible, with husband @Chasten at his side. pic.twitter.com/PsS8wElMkz

“This is our moment to build back better,” Buttigieg tweeted right after the ceremony.

This is our moment to build back better.

Please follow me at @SecretaryPete and @USDOT for the latest updates on how we’re transforming our nation’s transportation future. https://t.co/oqq3vRlXZ7

After running in the Democratic presidential primary last year and becoming the first out candidate to win a state’s primary, Buttigieg went on to become a fierce advocate for the Biden/Harris campaign.

And yesterday, the Senate confirmed him as Secretary of Transportation by a bipartisan vote of 86 to 13.

When I was a closeted teenager in the late 1990s there were no popular openly gay politicians like @PeteButtigieg. Instead, the Gabbards were on TV in Hawai'i saying same-sex marriage is gross and should be illegal. We’ve come a long way.

Thinking of our @PeteButtigieg who is getting sworn in as Secretary of Transportation this morning USA time by @VP Kamala Harris! So very, incredibly proud to be cousin of the first LGBTQ Senate-confirmed member to a Cabinet-level position! BOOT-EDGE-EDGE!!! 🇺🇸🇺🇸🇺🇸 pic.twitter.com/gqg0aYKvsA

I am moved. And can't wait to see @PeteButtigieg get this country moving again. Yeah, yeah. It's hard to not be corny with tears in the eyes. https://t.co/pBOWue4lQX

Well, it didn’t stream but the picture is enough for me. What an important day for @PeteButtigieg, @Chasten, Team Pete and America. CONGRATULATIONS!! pic.twitter.com/KxiBg62dnI

A Black gay journalist was told to stop “queening out” on camera. Now he’s speaking out.