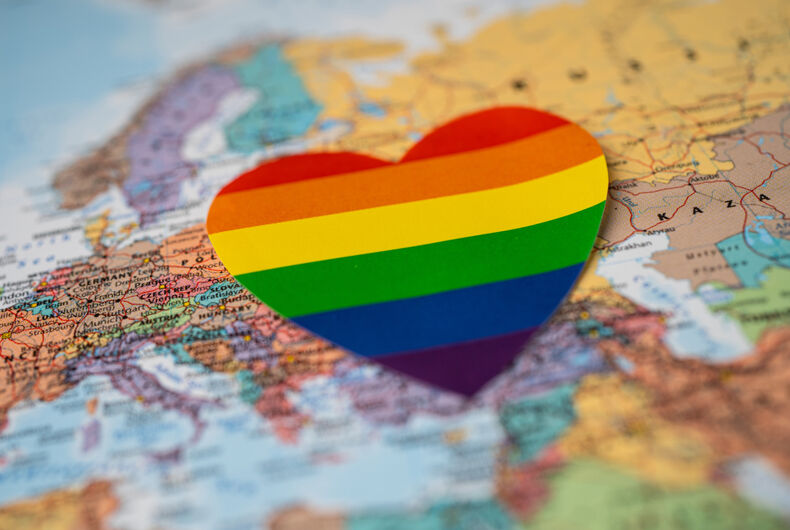 The new policies will include “combatting criminalization and protecting LGBTQ refugees and asylum-seekers,” Biden told reporters after a speech to State Department workers.

“America can no longer afford to be absent from the world stage” and must protect “every ethnic background,” LGBTQ people, women, and religious minorities, Biden affirmed.

“With today’s presidential memorandum, President Biden and Secretary [of State Antony] Blinken recommit the United States to a foreign policy that protects and supports the human rights of LGBTQ people abroad,” Human Rights Campaign President Alphonso David said. “Around the world, many LGBTQ people still face discrimination, persecution, and violence simply for who they are or who they love.”

“When America is at its best, it leads with the dignity and human rights of all as our North Star,” Out & Equal’s Director of Communications, Noam Shelef added. “We welcome the President’s new memorandum on the rights of LGBTQ individuals worldwide.”

Biden’s memo will make it “clear that the United States is a nation that values LGBTQ people at home and abroad, and is willing to fight to ensure every person is able to live free and equal,” David added.

The memo isn’t Biden’s first pro-LGBTQ action since assuming office. He has also removed former President Donald Trump’s arbitrary ban on transgender members of the military, and ordered government agencies to comply with all nondiscrimination laws – including protections for LGBTQ people.

Biden’s LGBTQ anti-discrimination executive order tells the heads of all executive agencies to “review all existing orders, regulations, guidance documents, policies, programs, or other agency actions” in order to ensure that they are interpreting bans on sex discrimination in federal law to also ban discrimination “prohibit discrimination on the basis of gender identity or sexual orientation.”

In 2017, the Trump administration’s gay ambassador to Germany, Richard Grenell, announced a U.S.-led campaign to end the criminalization of homosexuality worldwide. The campaign was a central feature in an election video produced by an LGBTQ Republican group in which Grenell claimed Trump was “the most pro-gay president in American history.”

“The decriminalization campaign is smoke and mirrors,” Graeme Reid, director of the LGBT Rights Program at Human Rights Watch, told The Daily Beast at the time. “The U.S. opposed criminalization long before President Trump took office – and saying people shouldn’t be imprisoned for being LGBT is the bare minimum of what the U.S. should be doing, not a bold endeavor.”

Other LGBTQ advocates noted that the campaign hadn’t really done much besides hold a couple of meetings.

It was “nothing more than a series of self-promoting Twitter photos,” said Julie Dorf of the Council for Global Equality.

If Democrats want to keep control they have to take control. It’s time to end the filibuster.