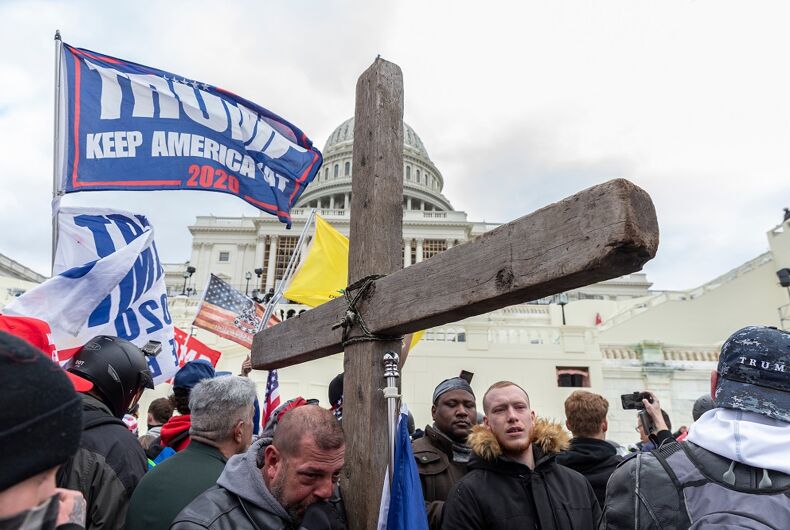 President Donald Trump has invited the Christian white nationalists to vacate their position at the margins of society to join the centers of power and influence in the full light of day.

We are seeing a reincarnation, a new Coup Klux Klan. A Trump Crusade.

These patriarchal white supremacists are the Christian counterpart of ISIS, and they are attempting to capture the United States as their corresponding caliphate.

They use their malevolent interpretations of scripture to justify the persecution and oppression of entire groups of people based on their social identities.

They have applied Biblical texts, sometimes taken in tandem, and at other times used selectively, to establish and maintain hierarchical positions of power for the purpose of establishing a political theocracy in their image.

We witnessed the inevitable outcome of Trump’s coddling and incitement of those he calls “patriots” whom he “loves” as fully armed radical extremists thundered into the Michigan State House to intimidate legislators into easing COVID restrictions and by plotted to kidnap and execute Governor Gretchen Whitmer (D).

After being summoned by their prophet, on January 6 they stormed the U.S. Capitol brandishing Bibles. They wore large metal Christian symbols around their necks and toted wooden crosses in their hands as weapons. They held high signs announcing “Jesus Saves,” “Jesus 2020,” “Make America Godly Again.” Some displayed anti-Semitic shirts and hoodies.

Pope Urban II summoned the First Crusade in Clermont, France to “liberate” Jerusalem from Muslims. Today, these Christian crusaders are fighting to “liberate” the United States from anyone they identify as “infidels.”

In the summer of 1096, as it began, crusaders murdered several thousand Jews along their way in the lands along the Rhine River, looting and destroying their homes, “because why should we go off to attack the unbelievers in the Holy Land and leave the unbelievers in our midst untouched?”

Today’s crusaders intended to kill members of Congress along with the Vice President. Police found pipe bombs scattered around the Capitol. Many of these domestic terrorists carried guns and rifles into the building.

Those first crusaders accused Jews of being treacherous auxiliaries of Muslims. According to Pope Urban II, “Let us first avenge ourselves on them [the Jews] and exterminate them from among the nations so that the name of Israel will no longer be remembered, or let them adopt our faith.”

One Crusader, an eyewitness to the event wrote, “Men rode in blood up to their knees and bridle reins. It was a just and splendid judgment by God that this place would be filled with the blood of the unbelievers.”

The Crusades lasted from 1040 – 1350. By 1204, however, the tide began to turn against the Western European invaders, as the Mamluk dynasty in Egypt drove them out of Palestine and Syria.

But let us be very clear: this will not be easy since the entire history of our country is founded on Christian justifications for oppression, from the Mayflower to the MAGA insurrection.