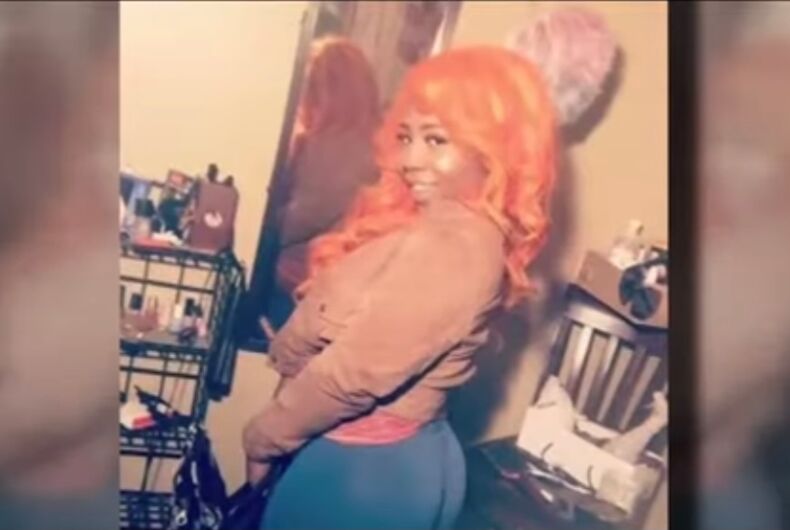 Her death was initially reported as a car accident, although she suffered gunshot wounds to the head. Chicago Police initially classified her as a John Doe, the standard name for an unidentified male victim. Even after being contacted by family and media, officers still intentionally referred to her as a male.

Related: Murder of gender non-conforming teen was broadcast on Facebook

Family and friends of Key are outraged, on top of grieving their loved one during the holiday season.

Key was found by the Chicago Police Department (CPD) as they responded to reports of gunshots. She was pronounced dead at the scene, after 8:35 P.M. Officers apparently believed at first that Key had died from a hit-and-run accident, but now they are operating from the belief that she died from bullet wounds.

Detectives assigned to the Area Two Detective Division are responsible for investigating the case. They are treating the incident as a homicide, but haven’t committed to investigating it as an anti-transgender hate crime. The Cook County Medical Examiner’s Office, whose mission is to perform autopsies or postmortem examinations and determine cause and manner of death for individuals, declined to comment.

Worse, upon contacting police, local media found that the detectives still refused to acknowledge that Key was a woman. “We asked Chicago Police … and we were told, again, the victim is listed as a male,” CBS Chicago reported.

Initial reports by local media also misgendered Key. Some subsequently updated their reporting, but others have not as of publication.

Key, 25, was described as “the life of the party – hilarious and determined,” CBS Chicago found. She previously posted on social media in memory of her trans friend Bella, who passed away in August, Pittsburgh Lesbian Correspondents found.

She is believed to be one of three murders to take place in the Windy City on Christmas. The Brave Space Alliance, a Black, trans-led Chicago LGBTQ Center, pledged to help with her funeral.

“She wanted to be something… she wanted to beat the odds,” Ross said. She insists that Kay was “targeted” because of her gender identity.

“We need to get to the bottom of this because Black trans lives matter,” Ross charged, “we are not going anywhere.”

The Human Rights Campaign (HRC) is also mourning Key’s death. This is the 43rd death of a transgender or gender non-conforming person they have tracked throughout 2020 — but they remind people that they are likely more, people being misgendered in their death, who aren’t here to defend their identities.

“Anti-transgender stigma is exacerbated by callous or disrespectful treatment too often seen from media, law enforcement and our highest elected officials,” HRC wrote in their statement. “Local LGBTQ advocates are calling for authorities to thoroughly investigate this crime, including an investigation into whether or not this was a bias-motivated crime.”

Tori Cooper, who serves as HRC’s Director of Community Engagement for the Transgender Justice Initiative, added to the statement that “Eshay Key was a vibrant and beautiful woman who had a big heart and big dreams. Eshay did not deserve to have her life cut short — none of the transgender and gender non-conforming people killed this year deserved that.

“To truly end the epidemic of violence against transgender and gender non-conforming people, we must work together to dismantle the stigma and bias that so many face. It will take all of us.”

Is America so broken now that we can’t turn back? Do we want to turn back?