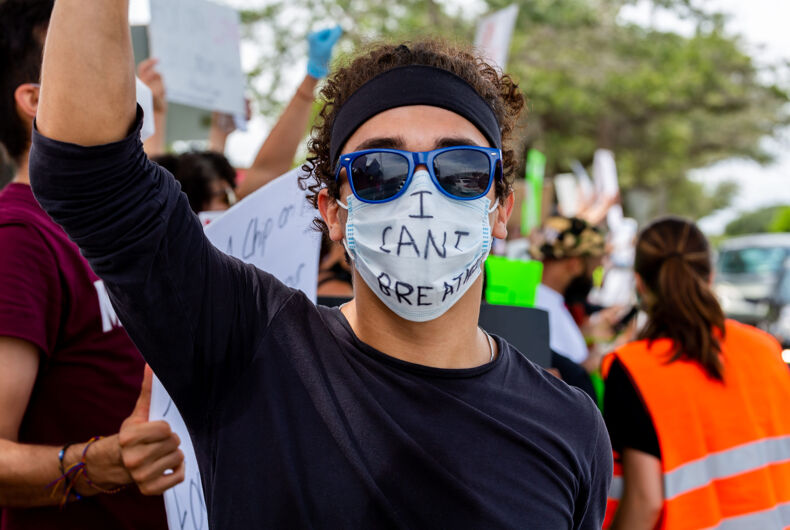 A man wearing sunglasses and a mask with the phrase "I Can't Breathe" in protest against the death in Minneapolis police custody of African-American man George Floyd at Coral Springs, Florida.Photo: YES Market Media / Shutterstock.com

With George Floyd’s death as an inflection point about race and racism in America, an unprecedented presidential election, and social unrest during an ongoing pandemic with a rising death toll, something is deeply broken in America’s body politic.

Related: You can help Black Lives Matter by becoming a better listener

America has been divided and broken before – the American Civil War and the Civil Rights Movement of the 1960s come to mind. However, is America so broken now that we can’t turn back? Do we want to turn back?

The daunting question as we approach 2021 is, invoking the words of Dr. Martin Luther King Jr., “where do we go from here?” We have revisited this question several times in American history, resisting the work and change needed to be done — individually, collectively, and systematically.

Many wondered, with the rage and frustrations of young black America, if the government would be able to extinguish the conflagration. Sadly, what caught the nation’s attention was not the protesters’ plights, but rather the violence.

“Everyone is worrying about the long hot summer with its threat of riots. We had a long cold winter when little was done about the conditions that create riots,” King stated that summer at a luncheon in his honor. The riots were public cries for better jobs, higher wages, decent housing, quality education, health care, voting rights, and to end mass incarceration and police brutality. In other words, it was a clarion call to end systemic racism.

However, the more things appeared to have changed on the surface for people of color through the years, the more they remain the same systemically. This year proved it.

Consequently, the summer of 2020 was a long, hot summer, too. According to Armed Conflict Location & Event Data Project (ACLED), “between 26 May, the day after Floyd’s death, and 22 August, ACLED records over 7,750 demonstrations linked to the [Black Lives Matter] movement across more than 2,440 locations in all 50 states and Washington, D.C.”

The protestors consisted of not only Black people, but the entire face of America, from all walks of life. 95 percent of the protests were nonviolent. This year’s demonstrations were inasmuch, the same as 1967: the public cry for better jobs, higher wages, decent housing, quality education, health care, voting rights, and to end mass incarceration and police brutality.

This time, however, the clarion call became to end systemic racism. Now.

In order to know, “where do we go from here?” we must honestly look at where we are now — and that doesn’t mean to excuse those who think they are on the right side of justice. While many white people would not think of themselves as racist, the distinction must be recognized that being “anti-racist” differs from simply not being racist.

White supremacy is an ideology and belief system. It is not the province of solely white people; there are Black white supremacists, too. Supreme Court Justice Clarence Thomas and Dr. Ben Carson are examples. They uphold a white heteronormative and nationalist government that has had power shaping policy impacting us all — LGBTQ people, women, and people of color, to name a few.

White supremacy is in the DNA of America. Clinging to it for as long as America has is precisely where we are today as a broken nation. The question “where do we go from here?” means America’s race problem has not been addressed.

While the COVID-19 vaccine will eventually stop the spread of the pandemic, sadly, the pandemic of racism will persist. Americans cannot be blamed for the misinformation we have been taught and have absorbed from our society and culture. However, we must be held responsible for repeating that misinformation, unexamined racism, and privileges in ourselves after we have had the opportunity to learn otherwise.

George Floyd’s death, a cisgender male, symbolizes the new face of anti-Black violence, as Matthew Shepard’s face came to symbolize homophobic violence after his murder in 1998. Floyd’s death forces us to look at what’s broken in America as well as ourselves.

His death also opens the chance for us to seek and share reconciliation and healing, recognizing our shared humanity. It starts by calling out and addressing racists, whether well-intentioned white liberals or ill-intentioned white nationalists, because both erase our lived reality of a multiracial society.

In other words, white supremacy and white privilege must not be thought of as outside of oneself. Rather, it must be assumed. With that assumption, democracy can fully begin for those on the margin to experience what others take for granted.

Otherwise — united, we won’t be, as a country. Divided, we will continue to be, as a petty people.

A trans woman was murdered on Christmas Day. Police are choosing to misgender her.