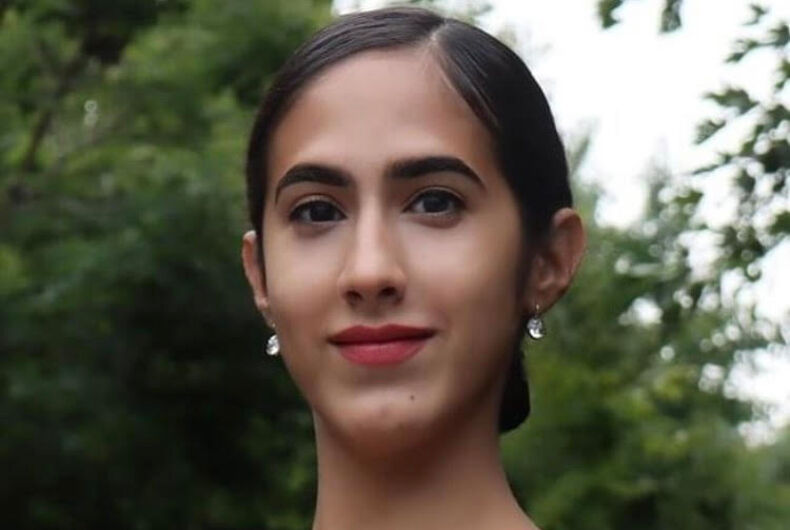 When out candidate Ritchie Torres made LGBTQ history in his election to Congress, he also left a vacant seat on the New York City Council. Now, that seat could be filled by another LGBTQ trailblazer: Elisa Crespo, who could become the first transgender lawmaker in New York City. She is also the first LGBTQ woman of color to run for office in the Bronx.

Running in a special election on March 23rd, Crespo told LGBTQ Nation that breaking these barriers is not about her.

Related: Ritchie Torres will be the first out Afro-Latinx person elected to Congress

“I think the question is what it would mean to the trans women of color and the queer people of color in this city who have never seen themselves reflected in their elected officials,” she said. “I try to focus on the people of my district and the issues they go through every single day.”

Crespo is running in Bronx District 15, which is considered one of the poorest in the nation. She understands what many of the residents face, she said, as she, herself, was raised by a single mother who relied on food stamps, Medicaid, and Section 8 to support her family.

“It’s time for us to elect people with political courage,” Crespo said, “and who will center our most vulnerable and our low-income communities of color and reverse the policies that have hurt people who have the least access to capital.”

Some District 15 neighborhoods, Crespo explained, have unemployment rates as high as 25%. As such, workforce development is one of her biggest priorities. She believes the best way to create more jobs is through a public option for employment, meaning the city would automatically provide jobs to those struggling to get one on their own.

In a piece for the Gotham Gazette, Crespo outlined this plan and suggested the funding for the program could come from canceling the $11 billion that have been allocated to build four new jails in the city. She also emphasized the need to raise taxes on the rich.

Crespo, who, among many others, has been endorsed by the LGBTQ Victory Fund, also plans to prioritize improving education access. She is currently the Education Liaison at the Bronx Borough President’s office. Her entry into organizing occurred while attending City University of New York (CUNY), where she fought for tuition freezes to ensure affordability for vulnerable students.

“That experience got me into close proximity with legislators in Albany, our state capitol,” she said, “and it was sort of my introduction to politics and how the power of organizing works.”

Stood w/ @AQE_NY as they launched their #ProtectStudentsNotBillionaires campaign today. Our students continue to lack devices, social workers & nurses, while the Billionaire class profits off our pain. It’s time to put our money where our mouth is and fully fund public education! pic.twitter.com/03QoJ8zZp2

Like many people, Crespo also became more activated during the 2016 presidential election.

“The rise of white nationalism and white supremacy and Donald Trump really horrified me,” she said, “and really made me understand that unless and until more of us get involved in our Democratic process, that this type of individual was going to keep rising.”

She was inspired by Bernie Sanders and his uplifting of issues like student loan debt and climate change. He made her want to fight harder, she said, for her generation’s future.

Though she identifies as a Progressive Democrat, Crespo is also a member of the Bronx chapter of the Democratic Socialists of America.

“I believe in the work that they do,” she said. “They are some of the folks that are pushing the most pressing issues in our city, like canceling rent and taxing the rich, and they’ve been doing that before, I think, some of the mainstream Democrats got on board.”

To those who fear the word socialism, Crespo suggests doing more homework.

“Not everyone that calls themselves a Democratic Socialist is the same. DSA is not a monolith, Take the time to fully understand what they are fighting for and how that can directly improve the quality of life of the most vulnerable people in our city, our working class and our working poor.”

I’m proud to stand in solidarity w/ @Teamsters Local 202, at Hunts Point Market in the Bronx, who are striking for fair wages. These essential workers bring in 60% of the City’s produce. Our union family demands a fair contract! One day longer, one day stronger! ✊🏽#JobsandJustice pic.twitter.com/xbdE8YDEBr

While there are many challenges facing her district, Crespo also has a deep love and admiration for the community.

“They are resilient people, people who are fighters and organizers at their core…There is no borough in New York City that is more inspiring or has people that have such a deep connection to their community than the people of the Bronx, and the 15th council district is no exception.”