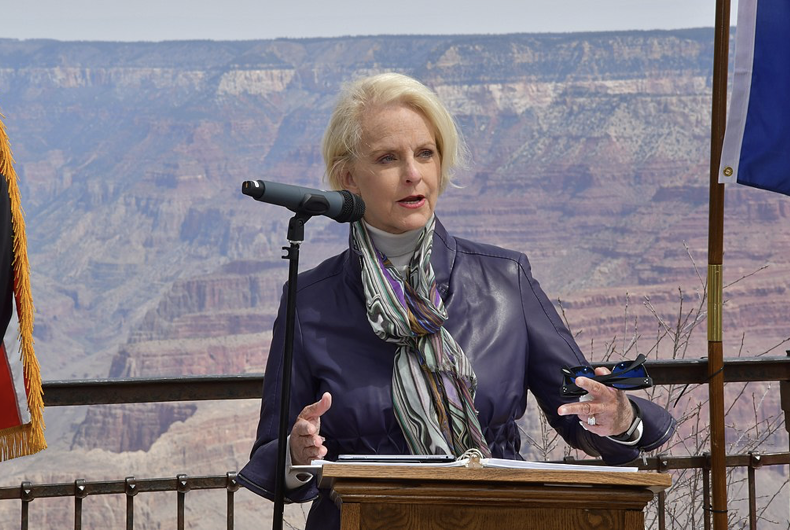 Cindy McCain, philanthropist and widow of the late Sen. John McCain (R-AZ), is one of several Republicans being considered to be censured by the Arizona Republican Party. She couldn’t be more excited.

“I think I’m going to make T-shirts for everyone and wear them,” she said of the impending censure vote.

Related: Arizona repeals law that forbade teachers from talking about about LGBTQ issues with students

While the main reason for the planned censure is McCain’s support for President-elect Joe Biden (D), the first reason mentioned in the censure resolution cites that she “supported leftist causes such as gay marriage.”

Other reasons that the Arizona GOP lists include that she “has failed to support Conservative Republican candidates,” naming President Donald Trump (R) among them, she “has supported globalist policies and candidates… in direct opposition to Republican values” such as Biden, and that she “condemned President Trump.”

They also claim that McCain didn’t support Trump’s “behavior” when it came to what they call the “actual presidential results.” The resolution initially called for the entire “McCain family” to be censured, but that was removed.

The resolution, if the majority of the party votes for it on January 23, would “dissolve any connections whatsoever” between the Arizona GOP and McCain, a lifelong Arizona Republican.

The Arizona GOP is chaired by Kelli Ward, who was a longtime critic of the late Sen. McCain and previously attempted to primary him for his seat in 2016. Ward is also seeking to censure Arizona Gov. Doug Ducey (R) and former Sen. Jeff Flake (R-AZ).

Other resolutions that the party will vote on includes a ceremonial moves to “thank & support” Trump, denounce those who move into America under the Deferred Action for Childhood Arrivals (DACA) program, only recognize English as the state’s official language, and “support the Electoral college.”

They also plan to vote on a resolution “in support of God’s plan of two genders.”

Under Ward’s tenure, Arizona became a blue state in the presidential election and lost both U.S. Senate seats to the Democratic Party, both of which haven’t happened in the Grand Canyon State in decades. McCain highlighted these “achievements” by the GOP chair in her statement ahead of the planned vote, as Ward is up for reelection in that same session as well.

McCain appeared on The View to discuss the second impeachment of Trump, but then her expected censure was bought up by Meghan McCain, her daughter and The View co-host.

“You know, I’m in good company,” the elder McCain remarked, “your dad was censured by them.” She is referring to the Arizona GOP’s censuring of Sen. McCain in 2014, which was reportedly due to “what they saw as an insufficiently conservative voting record.”

Meghan said she found the move to be “very angry and bitter for a state that’s now blue.” She explained that she felt that she should still be included in the censure as well, since she is also a lifelong Arizona Republican and supporter of marriage equality.

Meghan remarked to Cindy, “I don’t understand the anger and hostility, I found it deeply hurtful, and I know you did, too.”

“I truly hope that as things progress on,” Cindy concluded, “and we get further away from this mess that occurred, that we can do just that.”

Cindy is considered by some to be an advocate, having supported marriage equality on-and-off since 2010, having appeared in the NoH8 campaign with Meghan, and publicly pushed her late husband to vote in support of pro-LGBTQ legislation during his Senate tenure, despite his resistance and mixed voting record to the contrary.

Cindy McCain to @TheView on the possibility of being censured by Arizona GOP: "It's about doing what's right for the country…Sen. Flake and our Gov. Ducey have made some very tough decisions lately and in the past—but it was for the good of our state and for our country." pic.twitter.com/kXUcqWEqUf

Mississippi may ban trans people under 21 from receiving healthcare