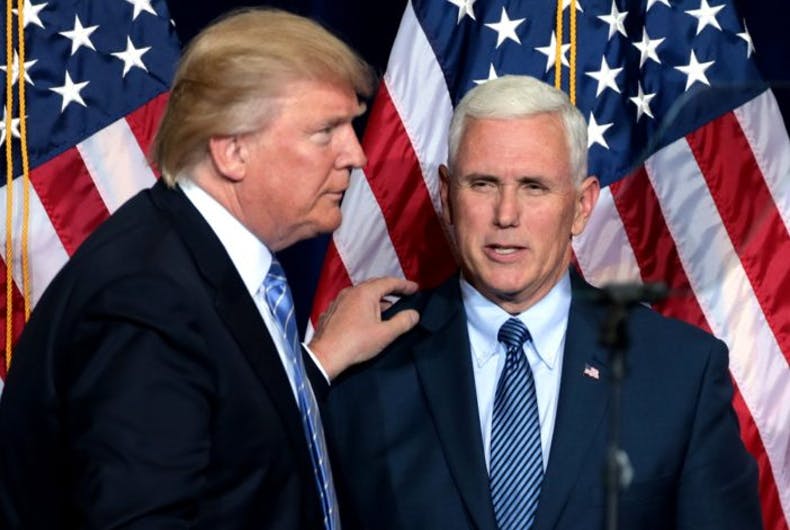 Vice President Mike Pence snubbed Donald Trump in the end by skipping the president’s send-off ceremony this morning, signaling a deeper rift between the two after Trump incited an angry mob that burst into the Capitol chanting for Pence’s public execution earlier this month.

Early this morning, the Marine One helicopter carrying Trump landed at Joint Base Andrews in Prince George’s County, Maryland, for a brief ceremony to send off the outgoing president.

Related: The first “Mike Pence for President” ad is here & it’s a doozy

“You are amazing people and this is a great great country it is an honor and privilege to have been your president,” Trump said in prepared remarks.

“Thank you, Trump,” the crowd chanted.

His wife Melania and his children stood on the tarmac at the base. Major Republican leaders, though, snubbed the event, and one person, in particular, was noticeably absent: the vice president.

The Office of the Vice President issued Pence’s schedule for today last night. Joe Biden’s and Kamala Harris’s 11 a.m. swearing-in ceremony is the only event listed on it.

CNN’s Monica Alba reports that a White House official said that it would be difficult “logistically” for Pence to attend the early morning ceremony in Maryland and the Inauguration in D.C. Even though Trump’s ceremony is at a literal airbase. Which is located about 10 miles away from the Capitol.

But that’s his excuse and he’s sticking to it. Melania and Donald Trump boarded Air Force One – without masks, because of course – and they set off for his Mar-a-Lago resort in Florida.

Normally, the outgoing president and vice president would head to the Capitol to attend the next president’s Inauguration. Barack Obama and Joe Biden did so for Trump four years ago.

On January 6, Pence presided over the Senate as it voted to accept the electoral votes from each state in the 2020 presidential election. The normally innocuous ceremony became the center of conspiracy theories and Trump supporters’ last attempt to overturn the results of the election as a mob of white nationalists and other conservatives rioted at the Capitol.

Just before the riots, Trump spoke to the crowd at a rally and said that the election was an “egregious assault on our democracy.”

The crowd set up a noose in front of the Capitol and chanted “Hang Mike Pence” as they stormed the Capitol in an attempted insurrection that left five people dead.

So it’s possible that Pence still has some hard feelings towards Trump.