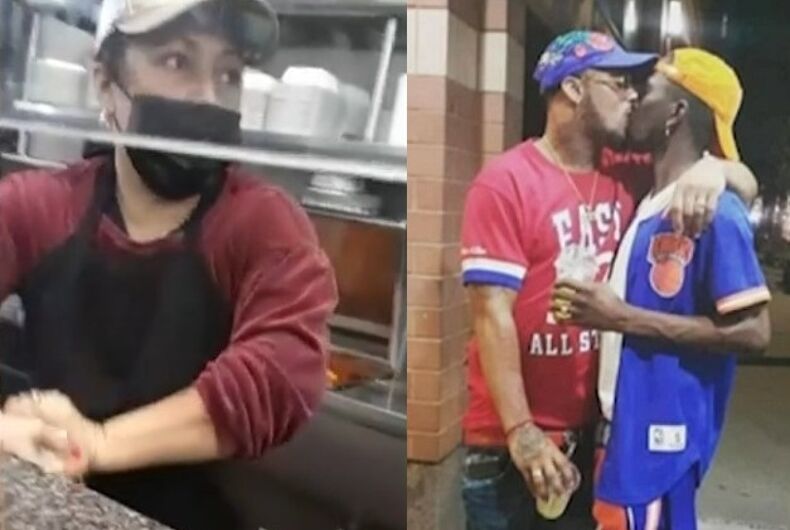 The employee in the video/Nelson Ayala and Jamel Brown Jr. Photo: Screenshot/News 12

A gay couple in New York City was yelled at and told to leave a restaurant because they were holding each other.

“Man and woman!” a worker at the La Isla Chuchifrito restaurant in the Bronx can be heard shouting at Nelson Ayala and Jamel Brown Jr., who are married.

Related: This gay high school couple was kicked out of a restaurant for hugging

In video captured by phone, a masked worker can be heard shouting “Hombre y mujer,” or “Man and woman” in Spanish.

Ayala and Brown said that they were holding each other affectionately in the restaurant, which is what set off the employee.

The men told the woman it’s OK for two men to love each other, and the employee said that her family has different customs. She then asked the couple to leave, even though other employees stood up for them.

The couple then canceled their order and called the police. The woman who was yelling at them can be heard saying “sorry” in the video.

“Now that we have to go somewhere and be kicked out because of our sexual preference,” Brown told News 12, “it’s just mindblowing.”

They said that they never plan on returning to the restaurant.

“Who I love should not define where I shop or eat at,” said Ayala. “I came here to get service, not to be judged.”

In a statement, the restaurant’s manager said that the employee in the video has been fired and “in no way do they condone the comments made by their former employee.”

The restaurant wants to offer Ayala and Brown “their sincerest apology and a free meal.”