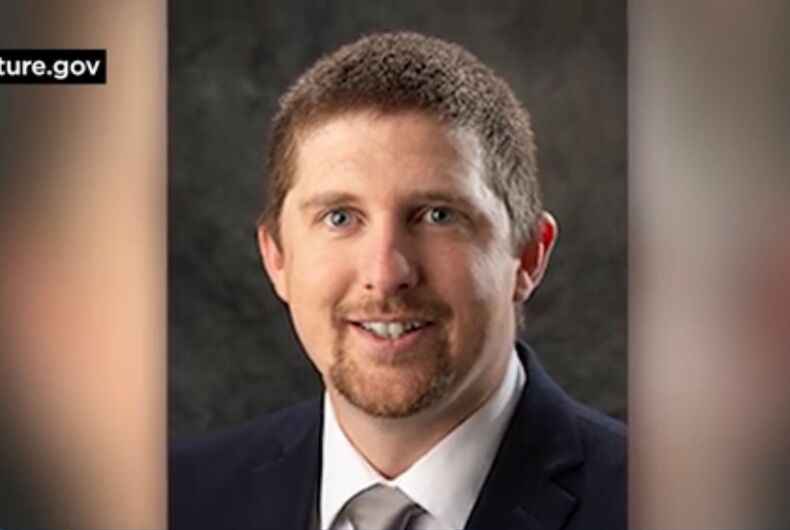 Derrick Evans, a recently-elected Republican noted for an anti-LGBTQ rant on Facebook, has resigned after his participation in the storming of the U.S. Capitol on January 6 and his subsequent arrest on January 8.

Evans live-streamed himself amongst the mob that was first to break beyond the police barriers and into the Capitol building while both chambers of Congress were in session to certify President-elect Joe Biden’s election victory. Evans even announced in the Facebook live video, “We’re in! We’re in! Derrick Evans is in the Capitol!” once he made it inside.

Prior to making it inside, Evans narrated while recording his surroundings. He said in the video that members of the mob were “making an announcement now, saying if Pence betrays us you better get your mind right — because we’re storming the building.”

He also chanted for people around him to “move” forward and “make a hole” for him and others to get through. Others in the video can be heard saying, “stop pushing,” as Evans moves further into the building.

Evans later deleted the stream, but that did not prevent his arrest by federal officials. The Department of Justice pressed charges against him for “unlawfully entering restricted grounds and violent entry and disorderly conduct.”

Evans had been elected as one of two West Virginia state delegates representing District 19 and was sworn in on December 1.

Evans submitted his one-line resignation to West Virginia Gov. Jim Justice on January 9. “I hereby resign as a member of the West Virginia House of Delegates, effective immediately,” he wrote.

Several members of the West Virginia legislature called for Evans’ resignation or proposed removing him by a measure if he didn’t. State House Speaker Roger Hanshaw (R) said, “Delegate Evans was, unfortunately, a part of the events this week that threatened what has historically made America a beacon for the rest of the world: the peaceful transfer of power.”

Evans’ attorney, John W. Bryan, has argued in statements that the now ex-delegate was there “documenting the progress” as a journalist or lawful observer and that this was part of his “activism.”

Prior to his election, Evans previously caused controversy via Facebook, writing a factually-inaccurate rant about the oft-banned book It’s Perfectly Normal, written for as a pre-teen friendly introduction to sexual topics by Robie Harris.

“It goes into great detail about homosexuality and goes as far as to say that gay men are considered to have the highest form of love. It normalizes boy on boy and girl on girl exploring and touching each other’s bodies. The book says people who disapprove of LGBTQ lifestyles, base their opinions on fears and misinformation,” Evans said.

For that reason, “those showing this to our children should be locked up,” he argued.

Evans had also received, and violated, a restraining order placed on him prior to his election, preventing him from continuing harassment of a woman that worked at West Virginia’s sole official abortion provider. Evans made “credible threats” and “engaged in stalking” as defined by the West Virginia State Code, the court found, and when he was found in violation of the restraining order, he “gave [police officers] false information” about the court’s decision.

In a statement beyond his resignation announcement, Evans said “I take full responsibility for my actions, and deeply regret any hurt, pain or embarrassment I may have caused my family, friends, constituents and fellow West Virginians.”

Will the religious right suffer any consequences for its role in the Trump insurrection?