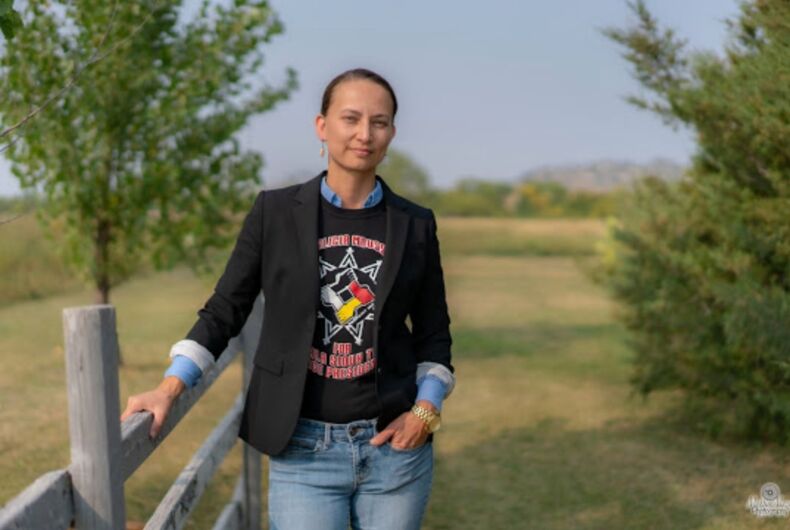 On November 3rd, Dr. Alicia Mousseau was elected Vice President of the Oglala Sioux Tribe, making her the first out LGBTQ person elected to the tribe’s executive council.

“To me, it’s just [about] representation, representation for our youth,” she told LGBTQ Nation about the historic occasion. “It is representation, and letting our youth know there are LGBTQ+ people in office that are trying to make changes for our community.”

Related: The country’s first out non-binary state legislator is also Muslim & they have a lot of work to do

While campaigning, Dr. Mousseau said that anytime she engaged with youth, they asked about her stance on LGBTQ rights.

“I was like, that’s awesome. Good. You should be asking those questions,” she said.

It is supporting my candidacy because they know I will be a strong voice for equality when elected and that with your support, I'm on-track to win. #ElectLGBTQ pic.twitter.com/xHf77yxsm2

A majority of the Oglala Sioux Tribe, including Mousseau, live on the Pine Ridge Reservation in South Dakota. Dr. Mousseau also grew up there, and said it has always been her dream to serve the community in a political capacity.

“I’m excited to see what we can do,” she said. “It’s a sleeping giant of a position, is what I like to call it. Because you can do a lot with it. You can really start some initiatives and carry them through and get people involved…

“So that’s what I’m most excited about, figuring out what we can do to help the community.”

Dr. Mousseau has a Ph.D. in Clinical Psychology from the University of Wyoming. She previously worked for the University of Montana’s National Native Children’s Trauma Center, working with tribal communities across the country to implement cognitive behavioral trauma intervention in schools as well as a family-based substance use prevention program for Lakota families.

As vice president, she hopes to continue bringing trauma informed practices to the tribe. She also hopes to build a science, technology, engineering, arts, and math (STEAM) research and training center.

There is a big STEAM emphasis throughout the Oglala Sioux schools, she explained, but it is not easy for people to work in STEAM on the reservation.

“We’re doing that through our educational system and getting those people excited about that and wanting careers in that area, and we need a place for them to land,” she said.

Dr. Mousseau was sworn in as Vice President on December 4th, and immediately attended a council meeting to discuss implementation of the COVID-19 relief money designated to the tribe by the CARES Act.

“We’re just trying to help where we can with that, getting the money utilized to service our community.”

The hate crime law came about after a same-sex couple in the tribe experienced significant harassment and lobbied for change.

According to Dr. Mousseau, moving the Oglala Sioux’s LGBTQ community forward is really about moving away from western influence and bringing the tribe back to its roots.

“In our traditional beliefs, everybody’s incorporated into our community,” she said. “There wasn’t really much shunning of people. You just figure out how to work them into your community…. We have those traditional beliefs in our history and culture, so I think those are still there and present…. It’s [about] getting back to who we are. It’s not any monumental change. It’s just getting back to who we are.”

As she begins her new role, Dr. Mousseau said she wants her community to know that for any problem they experience, they are in this together.

James Beard was the “gay male Julia Child.” His life was filled with food, fame & homophobia