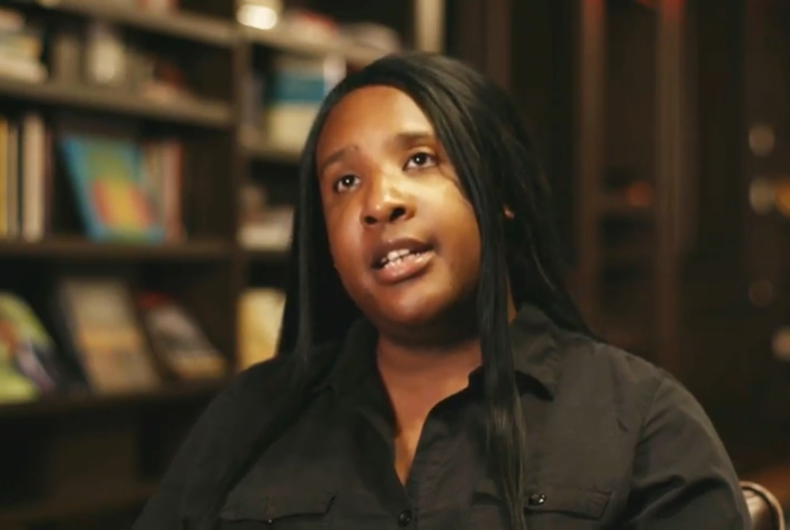 Organizer LaLa Zannell has spent years fighting for the trans community and helping to shape the national conversation on trans issues.

From 2015-2019, Zannell was the Lead Organizer at the New York City Anti-Violence Project. During this time, Zannell created the Trans and Gender Non-Conforming Leadership Academy and  set up forums for trans people across the city to discuss the issues that impact them most.

Zannell also spoke at the first ever White House briefing on the problems faced by trans women of color, testified before Congress on those same issues, was featured on the Advocate’s Trans 100 list, and created New York City’s first Trans Discrimination Survey.

With the Trump Administration’s constant attacks on the transgender community, Zannell tells LGBTQ Nation that much of the focus has been on “defense work.”

#TransAwarenessWeek #historicalfact 5yrs ago I was honored to testify at the first and so far only Congressional hearing on the violence facing #TWOC I got to share this moment with my sister @JoannaCifredo here's the article https://t.co/Hzp59Hwg20 #transwomenlead #IAmAmerica pic.twitter.com/O5faLBzKxU

For the past two years, Zannell has worked for the American Civil Liberties Union (ACLU) as their Trans Justice Campaign Manager.

“There’s just so much work to be done. The Trump administration has done so many things.”

No matter who is in office, Zannell caveated, there is always a lot of work to do when you’re part of a marginalized group. But the transgender community has faced a particularly harsh level of hostility from the Trump administration.

Throughout his presidency, the Trump administration took measures such as banning trans people from serving in the military, rolling back protections for trans students in schools, and attempting to remove anti-discrimination protections from the Affordable Care Act.

“Just sometimes showing up every day was hard, when trans women of color are being killed every single day and this administration is still stripping things,” says Zannell, a Black trans woman.

Once in office, President-elect Biden has promised to undo the harmful polices invoked by Trump. Zannell says that it will be crucial work to hold him accountable to the commitments he has made.

While there is tons of work to do, Zannell anticipates a much more open administration, one that has already made history for the support it has voiced for trans lives.

“Just the fact of hearing Biden talk about trans folks in his [acceptance] speech,” Zannell points out, “and hearing those things in a time where, the past four years, we’ve been cringing about what comes out of this administration’s mouth because their facts have been so wrong and so hateful towards trans lives.

“To be able to hear that, and to be able to see a trans person that will be a part of the staff, and hoping that more [trans] people will be able to be part of that staff, I think that is amazing.”

In addition to some executive orders Biden has committed to sign to reverse Trump’s discriminatory policies, Zannell also hopes to see the passage of trans rights policies through Congress. That dream, Zannell said, will depend on if Georgia can flip the Senate blue by electing two Democratic senators in the January 5th runoff elections.

“I have faith they will be able to do that… this election has shown people [that] power will always win, and that people’s determination and belief in changing the system will always win.”

As demonstrated by the consequential nature of the Georgia runoffs, it is not only Biden and Harris who have the power to bring about change.

Over the next few weeks, newly elected state legislators will also be sworn in across the country, including a rainbow wave of progressive LGBTQ politicians. These lawmakers have the power to ignite substantive change for transgender people in their communities.

Both at the state and national levels, Zannell has a big agenda for legislators who want to make the trans community safer. This agenda includes decriminalizing sex work, ensuring the well-being of trans youth in schools, making sure trans folks have access to IDs and documents that reflect their gender identities, and also having more conversations about the overall health of the trans community.

There also need to be studies addressing the root causes of violence against trans women of color, Zannell added. According to the Human Rights Campaign, at least 43 trans, non-binary & gender non-conforming people, most of them Black and Latinx transgender women, have been killed in 2020.

Zannell emphasized, though, that we don’t have to sit around and wait for our lawmakers to bring about change.

“There are things you can do personally and locally. Wake up every day and work with your circles. Make sure every day when we see… patriarchy and misogyny and racism and xenophobia and white supremacy show up, we can say, nope, that stuff does not fit in my mind.”

Zannell also emphasized the importance of hiring trans people for leadership positions in all levels of government.

“When we create leadership for trans folks, specifically trans folks of color, it gives a different trajectory of the work of the city, and helps you have someone be able to speak toward those margins, particularly when it’s done in a way that’s not tokenizing, when you’re authentically believing in that person’s leadership and allowing them leadership to be able to cultivate their own community, but also the other folks that are not part of our community.”

Hiring trans people for leadership roles that do not only focus on trans issues is also key, Zannell added.

“I think that is a broader culture shift, when they can see us in leadership roles and we’re leading everybody.”

#miccheck cisgender people have to stop handling black trans women like we are incompetent. Like what’s that all about?