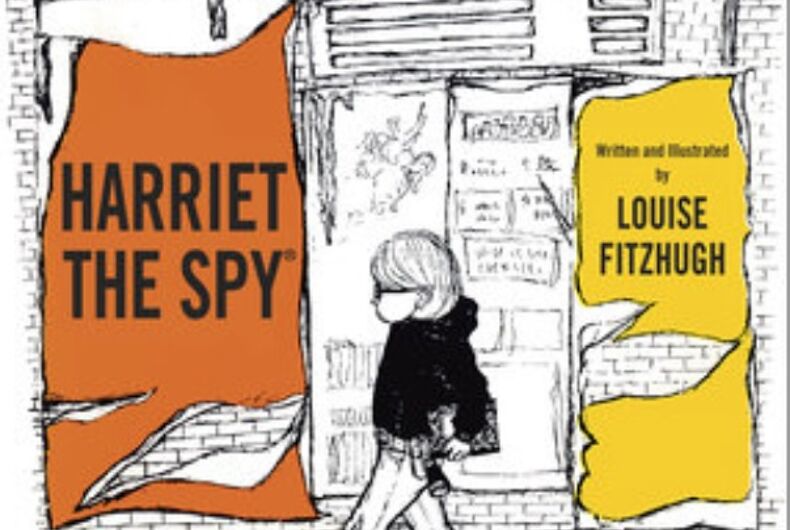 The modern LGBTQ rights movement had barely begun when author Louise Fitzhugh dreamed up confident, rebellious Harriet the Spy, an animated young girl who spied on her friends and family, wrote nasty things about them in her journal, wore “boys” clothing, and saw no problem at all with her boldness.

Harriet’s sexuality was not discussed in the book, but it was 1964, five years before the Stonewall uprising. At that time, mainstream LGBTQ young adult books (like 2012’s The Miseducation of Cameron Post, for example) were more or less figments of the queer imagination.

Related: The Prom is saving the world one lesbian at a time

Instead, queer kid heroes had to come in different, more concealed packages.

Fitzhugh, herself, was a lesbian, and thus, many have speculated that she wrote Harriet as a queer character — someone who was different from those around her and was constantly asked to apologize for it.

But, in a way that likely inspired many kids, Harriet refused to change.

“As a kid who already felt left out by the mechanisms of femininity that everyone around me seemed to adopt with ease, Harriet was the blue denim baby butch I needed among the endless ballerina narratives,” wrote children’s book author Kat Patrick in a 2019 essay for The Guardian on how Harriet the Spy helped them come to terms with their queerness.

“Back then,” they continued, “I didn’t yet have the words for what I felt fizzing through my insides, and even now, 15 years after coming out, I’m only just learning to feel comfortable with how I present: non-binary, butch.”

A new biography, Sometimes You Have To Lie by Leslie Brody delves into Fitzhugh’s personal life, including her sexuality.

In a review of the book, the New Republic discusses how the title represents one of the most controversial moments in Harriet’s story – when her nanny, Ole Golly, tells her that sometimes it’s okay to lie. This advice comes after Harriet’s notebook is found, and she struggles to apologize to those whose feelings she has hurt, since she isn’t actually sorry.

The biography’s author speculates that his empathy for lying is likely a nod to Fitzhugh’s need to lie about her own sexuality to protect herself.

“Truth and honesty are always things that are coveted in childhood, as long as the truth is palatable,” Patrick wrote in their Guardian essay. “But being butch, binding your chest, using different pronouns, and wearing your dad’s shirts: these are truths that plenty of people still don’t want to hear.”

“Ole Golly’s message to Harriet was practical and tender: do what you have to do to survive, and don’t feel too guilty about it. As a kid, that was a revelation. Louise Fitzhugh taught me how to forgive myself.”

So there you have it. Harriet the Spy was the queer hero you may have never known you had.