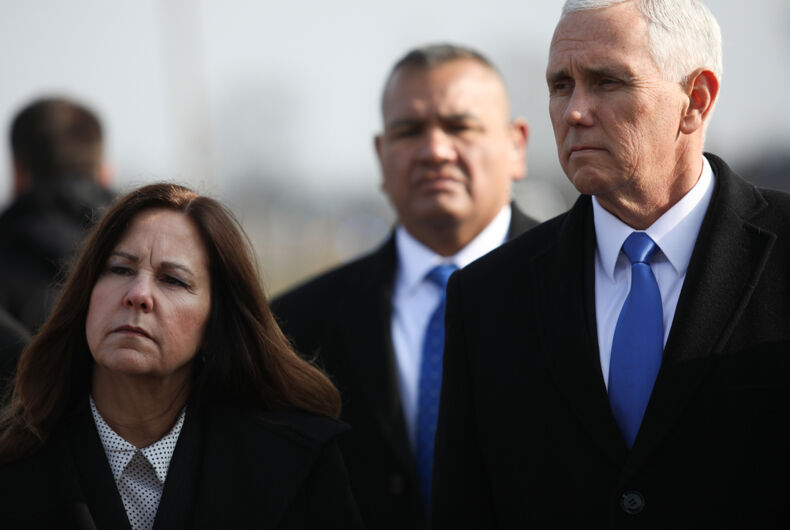 As LGBTQ businesses shut down during the COVID-19 pandemic, the school that Mike Pence’s wife Karen Pence works at received $724,900 in federal funds. The school bans LGBTQ students, faculty, and parents.

The Immanuel Christian School in Virginia received the funds as part of the Paycheck Protection Program earlier this year, a policy with a $669 billion budget that dispensed forgivable loans to businesses struggling during the pandemic lockdowns this year, the Washington Blade reports. The program was intended to help small businesses continue to pay workers.

The school claims that the funds helped save 115 jobs, which means that they’re saying that it cost around $6,300 per person to keep them employed.

In 2019, Karen Pence announced that she would be taking a part-time teaching job at the “born again” Christian school, which requires prospective employees to agree to a “moral purity” statement, which is entirely about sexual purity.

“I understand that the term ‘marriage’ has only one meaning; the uniting of one man and one woman in a single, exclusive covenant union as delineated in Scripture,” the application says.

“Moral misconduct which violates the bona fide occupational qualifications for employees includes, but is not limited to, such behaviors as the following: heterosexual activity outside of marriage (e.g., premarital sex, cohabitation, extramarital sex), homosexual or lesbian sexual activity, polygamy, transgender identity, any other violation of the unique roles of male and female, sexual harassment, use or viewing of pornographic material or websites, and sexual abuse or improprieties toward minors as defined by Scripture and federal or state law.”

Fortunately for Pence, the application does not mention divorce at all, since she is currently in her second marriage.

“It is shameful that an institution that discriminates against LGBT Americans received nearly $1 million in taxpayer funds,” said Kyle Herrig of the organization Accountable.US. “This money was meant to help mom and pop small businesses meet payroll and keep the lights on — instead the wealthy and well-connected cashed in.”

The Small Business Administration was in charge of managing the PPP but says that it does not comment on individual recipients.

The Immanuel Christian School also requires applicants to list their “Christian Experience” along with their education and professional experiences.

In the Parent Agreement, parents must refrain from “participating in, supporting, or condoning sexual immorality, homosexual activity or bi-sexual activity, promoting such practices, or being unable to support the moral principles of the school.”

“Our incredible second lady Karen Pence and by the way, by the way, I’ve gotten to know Karen so well,” Donald Trump said at the time, defending her choice to work at the school. “She is a Marine Corps mom, a tremendous woman, a proud supporter of military families and she just recently went back to teaching art classes at a Christian school. Thank you. Thank you, Karen.”

Mike Pence accused the media of “attacking Christian education” and called it “deeply offensive to us” to question Christians’ anti-LGBTQ views.