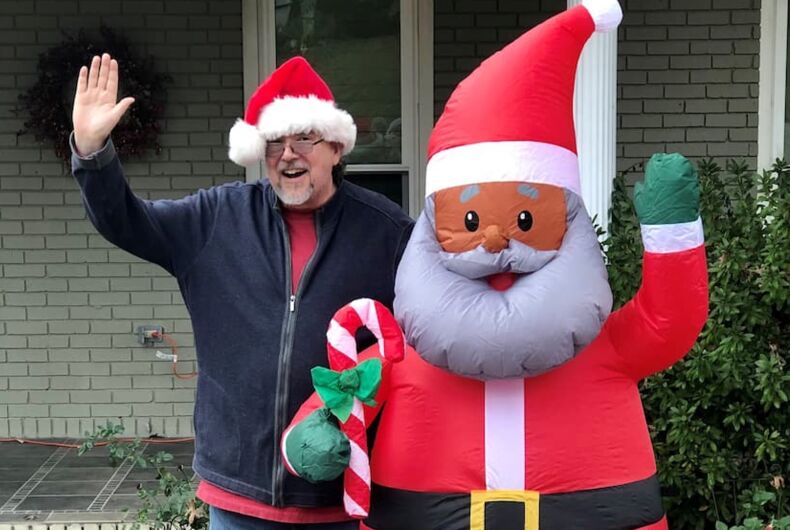 The family's neighbor, Chip Welch, put up his own Black Santa and sparked a wave of support from other neighborsPhoto: Chip Welch

An Arkansas family has been putting an inflatable Black Santa in their front yard for years. Decorating for the holidays is a family tradition for Chris Kennedy and his wife, Iddy, and their four-year-old daughter.

So when Kennedy opened his mailbox and found a racist letter from “Santa Claus” condemning the cheerful display, he was enraged.

Related: After a man ripped down a small town’s Pride flag, the residents took to the streets

“Please remove your negro Santa Claus yard decoration,” the letter read. “You should try not to deceive children into believing that I am negro. I am a caucasian (white man, to you) and have been for the past 600 years. Your being jealous of my race is no excuse for your dishonesty. Besides that, you are making yourself the laughing stock of the neighborhood. Obviously, your values are not that of the Lakewood area and maybe you should move to a neighborhood out east with the rest of your racist kind.”

“I just got something in the mail that is one, incredibly offensive, and two, just says where we are,” Kennedy said in Facebook Live video after finding the note.

“I am trying to be as nice as I can in this very moment because I am actually filled with rage. It’s very disheartening because it’s holiday time; we’re in a pandemic.”

After neighbors found out what had happened, they decided to fight back in a heartwarming manner. All over the neighborhood, Black Santas started appearing in front yards. And as more and more people joined in, the stores are running out of Black Santas.

“It was unsolicited, it was undeserved, it was un-Christmas, and hopefully it was not reflective of Lakewood, and certainly not reflective of the kind of country I want to live in,” Chip Welch, the first neighbor to erect his own Santa, told the Washington Post. “We were all pretty concerned about it, and we decided it would be poetic for everyone to get Black Santas.”

Soon the Santas were everywhere.

“When we saw what happened to Chris, we knew we couldn’t just stand by and not do anything,” Ben Keller told the paper. “We instantly decided what better way to support him than getting our own Santa display?”

Keller’s young son is Black, he said, and “he is absolutely thrilled to see some Santas that reflect back to him.”

“There is definitely more positive than negative,” Iddy Kennedy said. “The outpouring of support made me realize that this is the perfect place to raise our daughter.”

“She may not understand but she definitely notices the Black Santas popping up. I would like to think that’s a warm and fuzzy feeling. I didn’t see it growing up, but the fact that it will be normalized for her gives me hope for the future.”