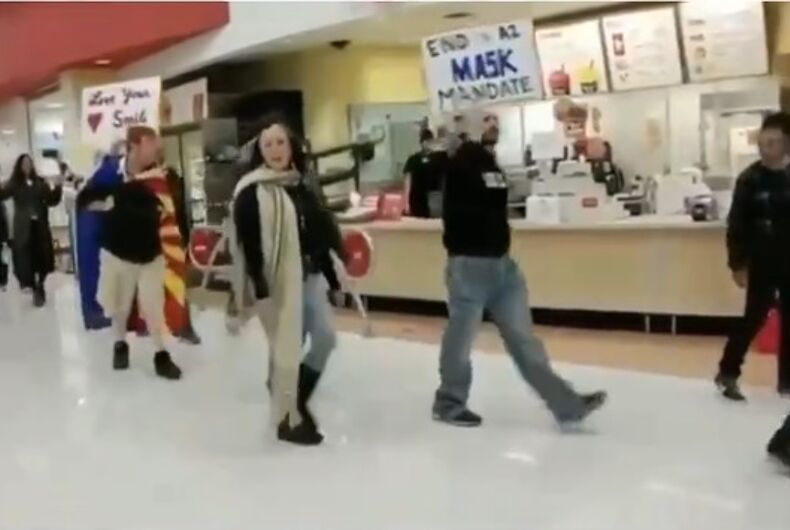 The protestors at TargetPhoto: Screenshot/Twitter

Late last week, a group of anti-mask protestors entered a Target and a Walmart near the Christown Spectrum Mall in Phoenix, Arizona, shouting, singing, and demonstrating against the county’s mask and social distancing orders meant to slow the spread of the worsening COVID-19 pandemic.

Two videos posted to Twitter captured a group of anti-mask protestors entering a Target while hooting, hollering, screaming “Freedom!” and “This is America!” waving an American flag and a Black flag with the phrases “Freedom or Death” and “Don’t Tread on Me,” carrying signs that read “End the BS Mask Mandate,” “Masks = 666,” and “Saving Face/Love Your Smile,” “Fear of Freedom,” “This is not China,” and “End the Mask Mandate.”

At one point, the group began singing the chorus to the hair metal band Twisted Sister’s 1984 hit “We’re Not Going to Take It.”

The sign reading “MASK = 666” is a reference to the Mark of the Beast mentioned in chapter 13, verse 18 of the Biblical Book of Revelation. The verse reads: “Here is wisdom. Let him that hath understanding count the number of the beast: for it is the number of a man; and his number is six hundred and sixty-six.”

The verse has been interpreted differently throughout history. Some Christian sects believe that the mark refers to a literal tattoo or identification marker that anti-Christ followers will impose to control all world citizens, but others interpret the “mark” symbolically as any allegiance to a secular government or monetary system.

The idea that the COVID-19 pandemic is a conspiracy meant to make citizens subservient to governments has circulated around far-right websites and fundamental houses of worship since the pandemic began.

The Phoenix protest group seemingly consisted of white people – though it’s possible some were of other racial or ethnic backgrounds – and whites are the racial group least likely to be affected by the local pandemic. According to the Maricopa County COVID-19 dashboard, Native Americans in the county have been 128 percent more likely than white residents to contract COVID-19 and Black residents have been 11.5 percent more likely than white people to contract the virus.

Maricopa County, the county containing Phoenix, requires all residents to wear face masks and maintain six feet of social distancing from others in public. The requirement has been in effect since Saturday, Jun​e 20, 2020.

Pat Robertson gives up on Trump: “You’ve had your day and it’s time to move on”