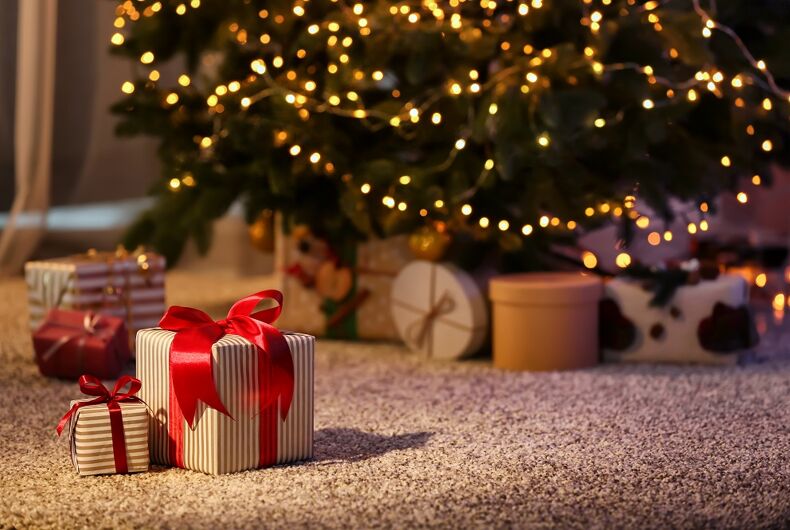 Every Christmas in Denver, Queer Santa comes to town.

A few weeks ago at The Center on Colfax, Denver’s LGBTQ community center, 77-year-old Linda Warren donned her Santa suit for the 22nd year in a row and passed out gifts to LGBTQ youth who had been rejected by their families.

This tradition was Warren’s own idea. When she presented it to The Center two decades ago, she had only one condition: any child who wanted a gift could get one, even if they had not been kicked out of their home.

Normally, she distributes these gifts at a party known as the “Holigay” celebration, but of course, the pandemic would not allow that to happen this Christmas.

Still, Warren refused to let COVID-19 stop the children from getting their presents.

So this year, along with volunteers in bright, festive holiday apparel, Warren wore a mask and face shield and passed out presents to people lined up in cars.

“In all my 77 years, I don’t believe I’ve ever seen a year like this,” Warren told Colorado Public Radio.

But for Warren, it had to go on, as she knows all too well the pain of being rejected by family.

“My family did find out I was gay after I was grown and they disowned me,” she said.  “So it’s very important to me to make sure that all children are taken care of and that we can do anything that we can.”

Normally, Warren is able to fulfill the kids’ exact Christmas wishes. Since shopping was a bit harder this year, she bought gift cards instead, wrapping them up with fun tchotchkes like rainbow socks.

Warren did not name herself Queer Santa. The kids who came to The Center began to call her that, and it took her some time to get comfortable with it.

“The word ‘queer’ was used to make fun of us when I was growing up,” she said. “But I had to finally realize that the children of this day in time have taken that word back, and they will not let people make fun of us by using queer… And so now I just refer to myself as Queer Santa.”

Warren spends all year preparing for this occasion, asking anyone and everyone she can for donations. Kids can then sign up to receive gifts, which are purchased and wrapped by volunteers.

Warren added that she’d do anything she can to help the kids who come to The Center, from ensuring they receive a Christmas gift to making sure they get an education.

When asked about her own Christmas wish this year, Warren told CPR she wished for something that can’t be wrapped up in a box:

“I would love for us to have peace and happiness and for this 2020 to go away and for the mask to not have to be worn.”

How LGBTQ people can handle difficult conversations during the holidays