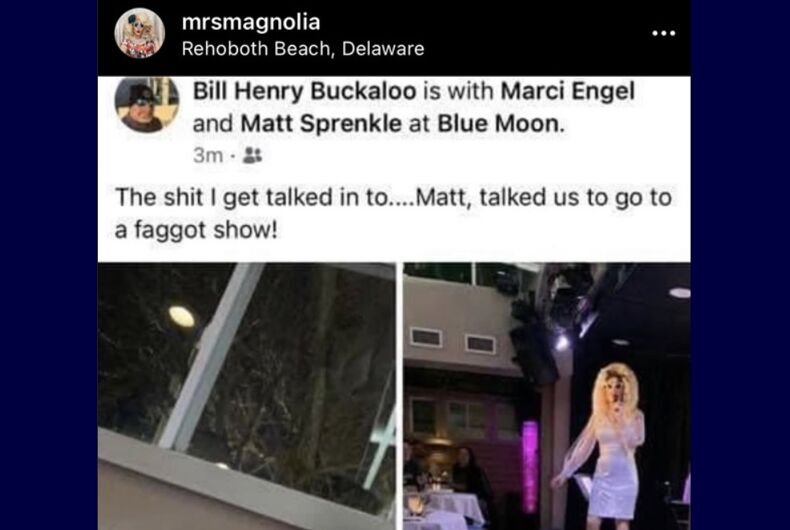 A firefighter has been suspended from his job after he posted an anti-gay slur on Facebook.

Bill Buckaloo is an assistant fire chief in Lewes, Delaware, and on Sunday he went to a drag show at the popular Blue Moon bar in Rehoboth Beach..

Related: A drag queen whooped an anti-gay Democrat in the primary election. It was a landslide.

During drag queen Magnolia Applebottom’s performance, he was on his phone and he posted to Facebook: “The shit I get talked into….Matt, talked us to go to a faggot show!” [sic] He even included a photo of Applebottom, implying that she was the “faggot” he was referring to.

Applebottom shared his post on her Instagram yesterday, writing that it’s “sad” that Buckaloo “thought it was ok to go to a gay owned and operated establishment… and go to a show hosted and produced by a award winning gay entertainer and use that F word on social media.”

The Lewes Fire Department has issued a statement saying that Buckaloo has been suspended pending an investigation into his social media use.

“Lewes Fire Department’s membership is diverse and lives within the community they serve working daily with the public to provide education and assistance emergently and non-emergently to its citizens,” the statement said. “The department is proud of its long-standing history of protecting the community and will work diligently in restoring any confidence lost by Mr. Buckaloo’s comments.”

“I want to sincerely apologize for my distasteful choice of words,” he wrote. “I definitely displayed a lack of good character and judgement [sic]. I offended a lot of people including myself. I have no excuse what’s so ever [sic]. I am truly sorry for all the harm I have caused.”

Applebottom said that she was surprised that he wrote the comment on Facebook because she remembered him from the show and he was sitting in the front row.

“In my eight years of performing at the Blue Moon I’ve never encountered such disrespect,” the drag queen told the Washington Blade. “It’s sad people like Bill are hiding in plain sight,” she said. “I really hope he held accountable for his behavior.”