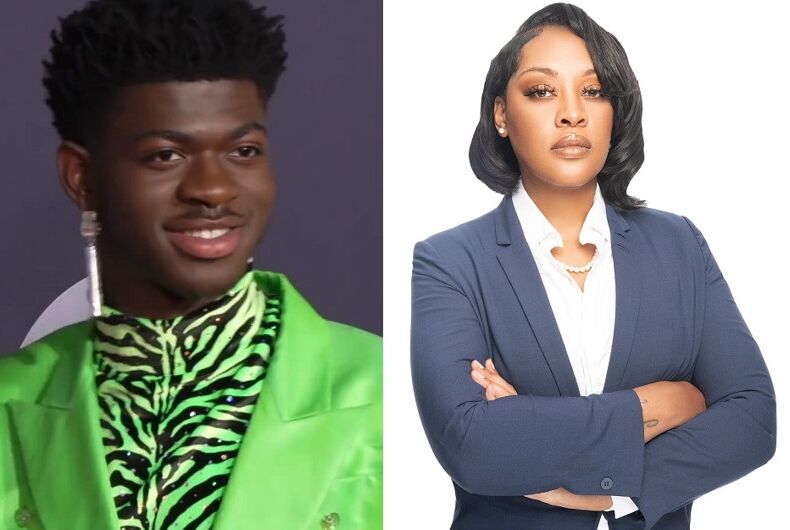 A failed Republican candidate for a U.S. House seat in Georgia just got slammed by out hip hop star Lil Nas X after she accused him of “pushing” homosexuality on “our youth.”

Angela Stanton-King ran for Congress in Georgia’s 5th District and lost, getting less than 15% of the vote. But she was on Twitter attacking a promotional image for Nas’s new single, “Holiday,” where he is shirtless, wearing Christmas gear, and making out with himself.

Related: Lil Nas X dressed up as Nicki Minaj for Halloween & spent the next day cleaning up the internet

“So this is what black culture is pushing to our youth now?” Stanton-King tweeted. “Sex with everything and everyone including yourself? Is lil nas x tonguing himself down? #BlackCulture #MerryChristmas”

So this is what black culture is pushing to our youth now? Sex with everything and everyone including yourself? Is lil nas x tonguing himself down? #BlackCulture #MerryChristmas pic.twitter.com/E9ZCuQPuEt

Nas, who came out last year and has been knocking down homophobes right and left since then, responded by accusing the Christian Republican of being “turned on” by the gay image.

“Just say ur turned on and go,” he tweeted.

just say ur turned on and go https://t.co/JxTakRDrrh

Stanton-King is the goddaughter of Alveda King, the anti-LGBTQ and rightwing niece of the Rev. Martin Luther King Jr. who has been a fixture in conservative media for decades.

The failed Congressional candidate has a history of extreme anti-LGBTQ statements, including associating homosexuality and trans identity with pedophilia.

“PEDOPHILIA,” she tweeted earlier this year with a photo of Zaya Wade, the transgender daughter of retired NBA player Dwyane Wade. “Gay means Men having sex with men. If you wouldn’t want your 12 yr old daughter advertising that she enjoys sex with men/boys why your 12 yr old son? This is confusion, pedophilia, and sexual exploitation wrapped up in acceptance.”

In 2004, the Trump-supporting QAnon conspiracy theorist was convicted in federal court on charges related to her part in a car theft ring and served six months in home confinement. Earlier this year, Donald Trump pardoned her.