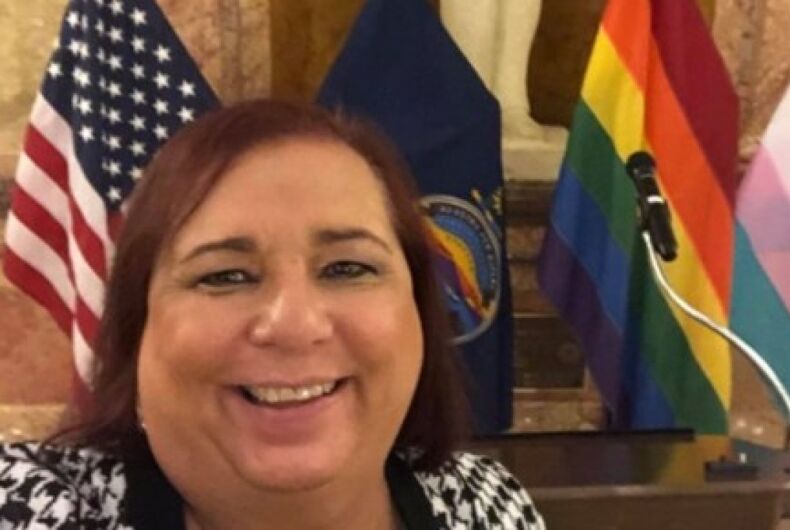 Kansas.com has reported that Byers won 54.4 percent of the vote, beating Republican challenger Cyndi Howerton who only earned 45.6 percent, a difference of just 486 votes.

Related: Sarah McBride will be the nation’s highest-ranking transgender politician after election victory

Though the state still has to count its provisional and mail-in ballots, the Victory Fund — an organization supporting LGBTQ political candidates — still declared Byers’s victory.

Byers, a member of the Chickasaw Nation, is a retired teacher who worked in Wichita public schools for 29 years. She was named the GLSEN National Educator of the Year in April 2018, and her campaign focused on finding more funding for public education, and expanding state Medicaid benefits and broadband internet access.

In a September 2020 interview with LGBTQ Nation, Byers said, “For me, being trans is not much different from the fact that I have brown eyes or that I’m of Native American descent or that I ride a motorcycle sometimes. It’s just one more part of the diversity and richness that makes me who I am.”

“But I also realize, too, that for a lot of people, being trans sometimes is one of the things that holds them back, and the way we get people to accept is by people seeing success,” Byers added.

Byers publicly came out as trans in 2014. She said her students and school administrators were all supportive after she came out. After deciding to run for office, Byers said she wanted to use her candidacy to advocate for underrepresented people.

Her political opponent Howerton refused to make Byers’s trans identity a divisive issue, stating, “We are running on ideas of what is best for our district and state.”

In a statement, Victory Fund President and CEO Annise Parker said, “Stephanie shattered a lavender ceiling in Kansas and its impact will reverberate well beyond the borders of the state. Her victory will inspire more trans people to run for office because they see it is possible and understand these candidates are transforming how America perceives them.”

“While cynical politicians attempted to weaponize trans issues for political gain this cycle, Stephanie’s victory is a powerful reminder that most voters reject the politics of bigotry and will elect trans people who have a positive vision for their communities,” Parker continued.