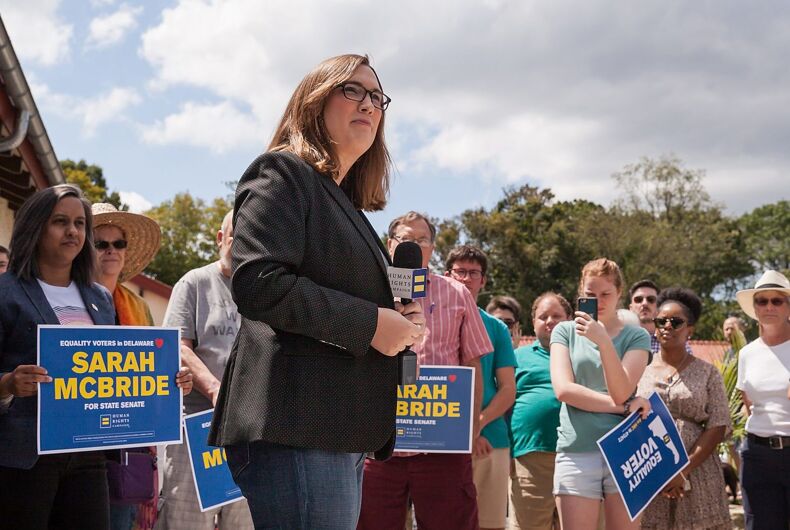 A night of transgender history continues with Delaware’s Sarah McBride becoming the first out trans state senator in the country.

We did it. We won the general election.

“Time and time again, I’ve had the opportunity to see there is space for people of all different backgrounds, including trans people, in our politics,” McBride told LGBTQ Nation in February.

McBride, who is the National Press Secretary for the Human Rights Campaign, will be representing Delaware’s first district and is focused on criminal justice reform, equal access to education, affordable healthcare, and increased access to paid medical leave.

“Sarah’s overwhelming victory is a powerful testament to the growing influence of transgender leaders in our politics and gives hope to countless trans people looking toward a brighter future,” said Mayor Annise Parker, President & CEO of the LGBTQ Victory Fund, in a statement.

“Throughout this election cycle, Donald Trump and other cynical politicians attempted to use trans people as a political weapon, believing they could gain popularity by stoking fear and hate. For Sarah to shatter a lavender ceiling in such a polarizing year is a powerful reminder that voters are increasingly rejecting the politics of bigotry in favor of candidates who stand for fairness and equality. Her victory will inspire more trans people to follow in her footsteps and run for public office.”

I just had the privilege of voting for myself in the general election.

To anyone who worries that their truth and their dreams are mutually exclusive, know that change is possible. Know that your voice matters. Know that you can do this, too. 💗 pic.twitter.com/2B4ZMpPony

In 2013, McBride also played a key role in the passage of LGBTQ nondiscrimination laws in Delaware while on the Board of Directors at Equality Delaware, and she was even awarded Order of the First State by then-Governor Jack Markell for her efforts.

In February, McBride told LGBTQ Nation, that it has not been a challenge to run as an out and proud candidate in her district:

“What has been clear to me throughout my life, and what has been demonstrated every day of this campaign, is voters throughout this district judge people on their merits and what they have to bring to the table, not on their identities. I’m seeing that people don’t care about my gender identity. They just care about whether I’m going to fight for them.”

“Tonight, Sarah made history not just for herself but for our entire community. She gives a voice to the marginalized as a representative and an advocate,” said Alphonso David, president of the Human Rights Campaign.

“This victory, the first of what I expect to be many in her career, shows that any person can achieve their dream, no matter their gender identity or sexual orientation. Though we will miss having her as an employee at the Human Rights Campaign, Sarah will undoubtedly represent the First District well and we look forward to seeing what she accomplishes.”

Taylor Small will be Vermont’s first out transgender legislator