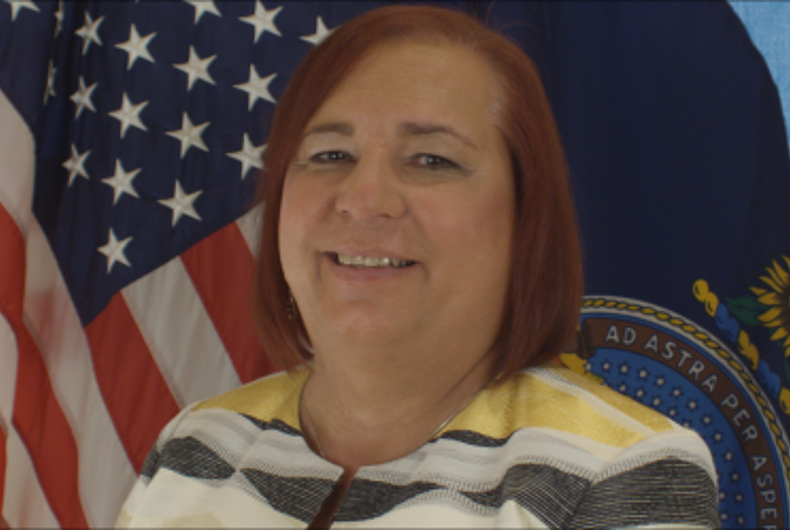 It was October 8, 2019. After winning the GLSEN National Educator of the Year Award, Stephanie Byers had been asked to speak at an ACLU rally outside the U.S. Supreme Court. Inside the building, the Court was hearing oral arguments in three landmark cases that would determine whether employers had the right to fire people for their LGBTQ identities.

While making her speech, Byers didn’t yet know that these cases would lead to a historic victory for the LGBTQ community. But with the Capitol building in view, she did realize one thing for sure: she needed to run for office.

Now, running as a Democrat to represent Kansas House District 86, Byers could become the first out trans person in the Kansas state legislature.

While she doesn’t see her trans identity as a defining feature of who she is, she also understands that a victory in this race would be  significant for the trans community.

“For me, being trans is not much different from the fact that I have brown eyes or that I’m of Native American descent or that I ride a motorcycle sometimes,” she told LGBTQ Nation. “It’s just one more part of the diversity and richness that makes me who I am. But I also realize, too, that for a lot of people, being trans sometimes is one of the things that holds them back, and the way we get people to accept is by people seeing success.”

Byers hopes a victory in this race will help her show other trans folks what they are capable of. “If I can get elected, that’s one more barrier we take down, that helps open the doorway, at least by example. If there’s somebody that can do this, maybe somebody else goes, I can do this, too.”

Nevertheless, she emphasized, the people in her district are far more concerned with how she will improve their lives than with her gender identity.

“Who you are is one thing,” she said. “But how you serve us is the other.”

She is also passionate about the need to expand Medicaid in Kansas. Her district encompasses the Wichita area, a hub of the airline industry. Thousands of workers in her district, she said, many who work for airlines, have been laid off or furloughed as a result of the pandemic and are in need of better healthcare access, she said.

She also hopes to fight what she says is a “tremendously high” tax on food in many areas of Kansas, one that is especially painful in these difficult economic times.

And in a time when life is becoming increasingly virtual, Byers said many areas of Kansas are in desperate need of better broadband access.

“Broadband access should be as much of a human right in the society we live in as clean water, and yet we struggle, even in a metropolis.”

Byers highlighted repeatedly that her focus is on bringing the humanity of her constituents to the legislature.

Who will be LGBTQ Nation’s Up & Coming Politician of the Year?