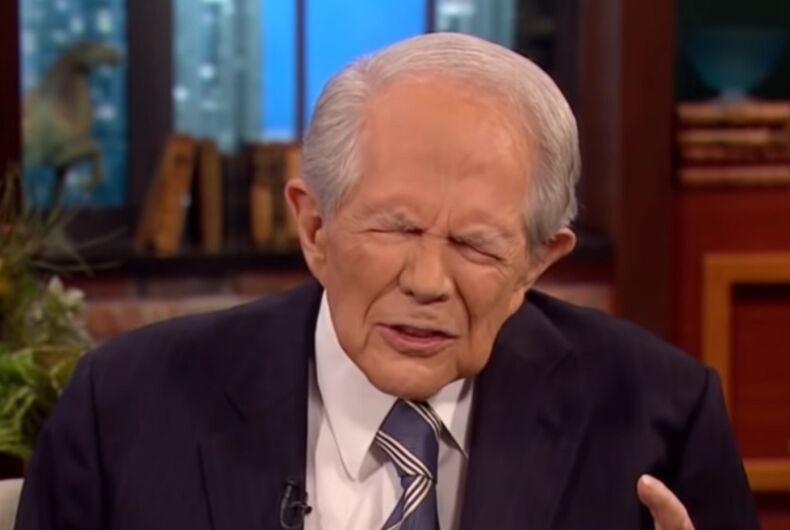 Televangelist Pat Robertson is praying that the U.S. prayed for God to end “the spirit of delusion” that is making people think that Joe Biden won the election.

“In the name of Jesus, I bind the spirit of delusion that has come across our land,” he said on The 700 Club. “We will not surrender our nation. We will not give up this great country.”

“And Satan, you cannot have it, in the name of Jesus,” he continued, implying that Biden is being made president by the devil.

“I believe God has heard” his prayers, he said. “And I’m asking everybody in this audience to pray.”

“It isn’t over yet. And I do not think, again, He wants to turn this nation over to socialism and Bernie Sanders and oh- AOC and those people are pure socialist and they want to take over control of everything.”

“We cannot allow that. So let us pray. And what am I hearing? I still think Trump’s gonna ultimately win.”

Pat Robertson remains confident that Trump will win the election: "We will not give up this great country and Satan, you cannot have it." pic.twitter.com/VeOJLJ6uDS

In October, Robertson prophesied that Donald Trump would win the election.

“Without question, Trump is going to win the election,” he said at the time, adding that it’ll be “horrible” immediately after Trump wins because of “Trump Derangement Syndrome.”

This, he predicted, would cause Muslim-majority nations to take the opportunity to attack Israel. God would then intervene and wipe out those countries, leading to “a remarkable time of peace.”

Earlier this year, he said that the Black Lives Matter movement wants to “destroy the nuclear family,” as well as Christianity itself.

“They want to up-end the capitalist structure and destroy America,” he said.