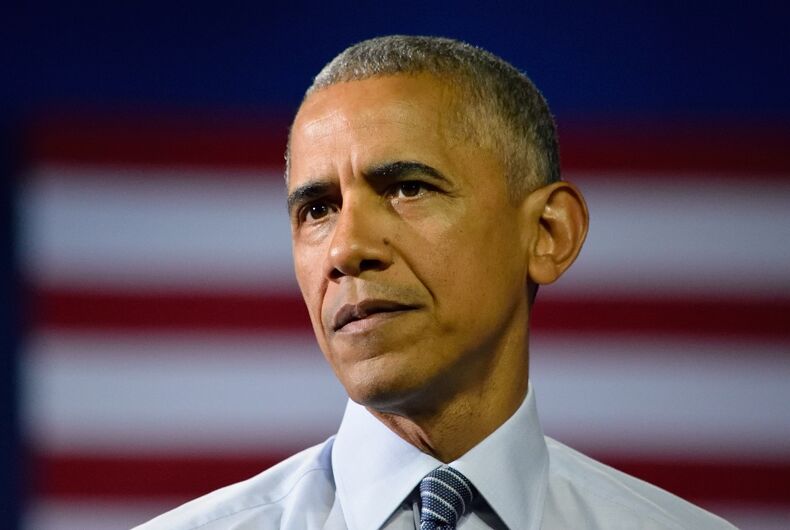 Barack Obama admits in his new biography that he used anti-gay slurs growing up before truly appreciating what they meant and the stigma faced by LGBTQ people. In A Promised Land, the former president recounts using words like “fag,” saying that he is now “ashamed” of his behavior.

He also reveals that his great aunt was a lesbian.

Obama cites “the friendships I made and the stories I heard… from LGBTQ people during college and my early career” with “opening my heart to the human dimensions of issues that I’d once thought of in mainly abstract terms.”

“I grew up in the 70s,” he writes, “a time when LGBTQ life was far less visible to those outside the community, so that [his grandmother] Toot’s sister (and one of my favorite relatives), Aunt Arlene, felt obliged to introduce her partner of 20 years as ‘my close friend Marge’ whenever she visited us in Hawaii.”

“And like many teenage boys in those years, my friends and I sometimes threw around words like ‘fag’ or ‘gay’ at each other as casual put-downs – callow attempts to fortify our masculinity and hide our insecurities.”

“Once I got to college and became friends with fellow students and professors who were openly gay, though, I realized the overt discrimination and hate they were subject to,” he adds, “as well as the loneliness and self-doubt that the dominant culture imposed on them. I felt ashamed of my past behavior – and learned to do better.”

Obama’s aunt died in 2014 at the age of 87. Her obituary simply noted that she was survived by family and her “friend Margery Duffey.”

“Alongside abortion, guns, and just about anything to do with race,” Obama writes about his time in office, “the issues of LGBTQ rights and immigration had occupied center stage in America’s culture wars for decades, in part because they raised the most basic question in our democracy – namely, who do we consider a true member of the American family, deserving of the same rights, respect, and concern that we expect for ourselves?”

“I believed in defining that family broadly – it included gay people as well as straight, and it included immigrant families that had put down roots and raised kids here, even if they hadn’t come through the front door. How could I believe otherwise, when some of the same arguments for their exclusion had so often been used to exclude those who looked like me?”