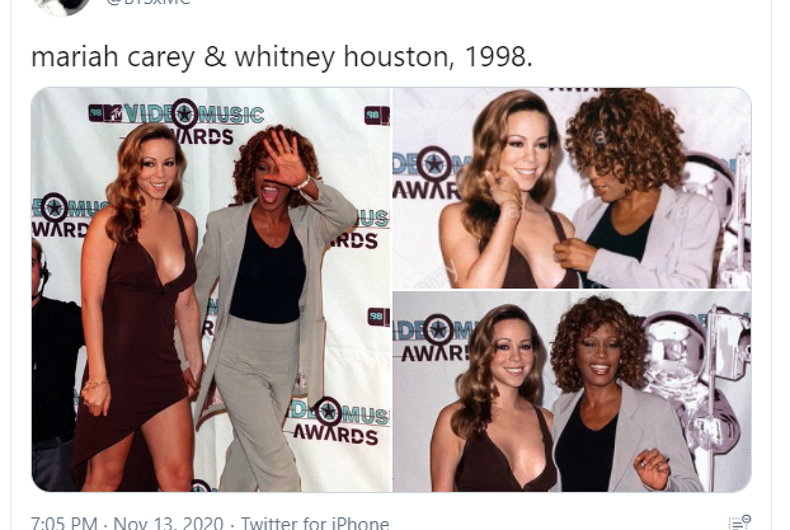 Very few personal relationships between two pop music sensations received the attention and the hype as the one between Whitney Houston and Mariah Carey did in the 1990s.

The two collaborated in 1998 on the Academy Award-winning song “When You Believe,” which became one of the later hits in Houston’s catalog while one of the earliest in Carey’s career. For years before and after the duet, however, gossip brewed that the two well-established diva personalities were competing for pop music fandom’s attention.

Related: How Roseanne got away with a forbidden same-sex kiss in the ’90s

Once asked what she ‘thought’ of Carey prior to working with her, Houston infamously said “I don’t think of her,” which overshadowed her compliment that her younger counterpart was a “good singer.” Subsequent interviews pressed the same question, leading Houston to say “maybe it’s not what I think, it’s what she thinks.”

Their “feud” was mostly drummed up by tabloid press that pitted the two against each other early on, but there wasn’t much evidence publicly available to support it. In fact, the two appeared together often when they went on a press run for “When You Believe,” which accompanied the soundtrack to the Disney animated film The Prince of Egypt.

“We had fun and so, if nothing else, it was a good experience and diva-ism, whatever,” Carey commented on making the song with Houston afterward.

Carey and Houston’s connection has become a hot subject again, after images of the two together on the red carpet prior to the 1998 MTV Video Music Awards were recently posted on Twitter.

The images, credited to veteran photographer Vince Bucci elsewhere online, show the two holding hands as they greet paparazzi, and Houston apparently adjusting one of the straps on Carey’s dress.

The apparent closeness of the two in the images have sparked a different kind of rumor about the entertainers’ relationship.

It was an open secret among those in Hollywood or anyone in Houston’s circle that she was attracted to women, more specifically friend and confidant Robyn Crawford. She denied it while she was alive, but both her ex-husband Bobby Brown and Crawford herself have confirmed that Houston was bisexual since she passed away in 2012.

Carey has talked about her working relationship with Houston since her death. “We didn’t know each other — and she was one of the greatest of all time — and then we finally did a duet together that won an Oscar,” she said in 2019.

“We had the best time working together. It was female camaraderie. We both got it. We were like, ‘she doesn’t hate me.’ We’re actually having a great time together and this is more fun than I have working alone, ever.”

The subject, however, was one that was not broached directly in her tell-all book The Meaning of Mariah Carey, although she does mention their song’s success.

Imagine if they were a couple back then 👀🔥❤ https://t.co/bnitJvvhOs

There's no hetrosexual explanation for this https://t.co/AfbB8lLh2H

Smells gay to me https://t.co/4dQzNaAHKc

This how I pull up to family functions with my “lil friend” . https://t.co/5ZTsCkV1Oe

POUR THIS GAY SHIT STRAIGHT INTO MY VEINS https://t.co/xC1UX6MRYR

Me in 2025 attending family functions with my roommate. https://t.co/8YPkjRYO69

"what's something that isn't lesbian but FEELS lesbian?" https://t.co/zU9zsu21mz

This revelation so early in the morning 🥵🥵🥵🥵 https://t.co/j8UnCpp7MD