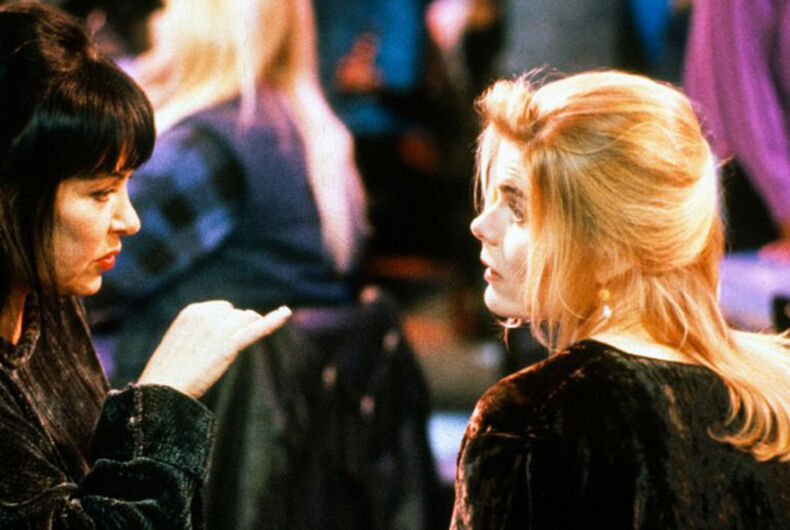 Who knew one simple smooch could cause such a fuss? Back in 1994, there as an unbelievable media circus when the show Roseanne decided they wanted to feature a same-sex kiss in an episode — and then all hell broke loose at ABC.

Queer kisses weren’t unheard of on TV at the time — but they almost always caused a huge hullabaloo. An episode of Tales of the City showed two men kissing, and in response, conservatives organized a campaign to try to defund all of PBS. They were nearly successful, with state legislatures slashing their public TV budgets, and PBS canceled a planned second season rather than risk losing even more money.

And sometimes the freak-outs didn’t even need a kiss to get going: In 1990, the ABC show Thirtysomething showed two men in bed, not even touching, and so many sponsors pulled out that it cost the network the equivalent of $40 million. Other shows, like 21 Jump Street and Picket Fences, used jumpy edits to hide same-sex kisses or re-shot kisses in the dark so viewers couldn’t see what was happening.

So that was the climate in which producers of Roseanne announced that they not only wanted to feature a same-sex kiss, but they wanted to set it in a gay bar.

That touched off a huge fight behind the scenes: On one side were ABC executives, led by Bob Iger (who would go on to run Disney a few years later). The executives wanted the kiss to happen off-screen — they kept bringing up how expensive it was to show two men on Thirtysomething.

On the other side were the Roseanne showrunners, many of whom were gay, who felt strongly that the kiss should be seen.

It seemed like the executives would get their way — after all, they run the network. But showrunners had a secret weapon: press connections. They leaked stories to news outlets, invited journalists to set, and paired reporters with GLAAD to get favorable coverage. The result was a media firestorm that had the whole country talking about the show’s controversial upcoming kiss episode, and eventually, ABC execs gave in and let the kiss go forward.

(I go into more detail on exactly how the producers pulled off this tidy little coup in my video about Roseanne’s same-sex kiss, embedded below.)

That opened the door to lots more queer content on sitcoms — especially a year later when Roseanne featured a gay wedding. It wasn’t the first to do so (Roc had one in 1991) but it was watched by millions, and this time it had two big kisses.

The producers were pushing hard to create an entire spinoff starring a gay couple, which would have been a stunning milestone in TV history… if only ABC executives had not felt at the time that a sitcom couldn’t possibly star a gay couple. But it at least pushed the door open for a milestone that did happen one year later on ABC: Ellen’s groundbreaking coming-out.

Now, we take same-sex kisses for granted on TV. But before we could get Tara and Willow on Buffy or the guys on Glee, someone had to push past the restrictions that kept same-sex affection off the air and prove that a gay kiss wouldn’t mean the end of television as we know it.

Individualism vs. Society: How our true character has been exposed during a pandemic

Trans & queer New Yorkers faced brutal use of force by police near Stonewall. The mayor “doesn’t know anything.”