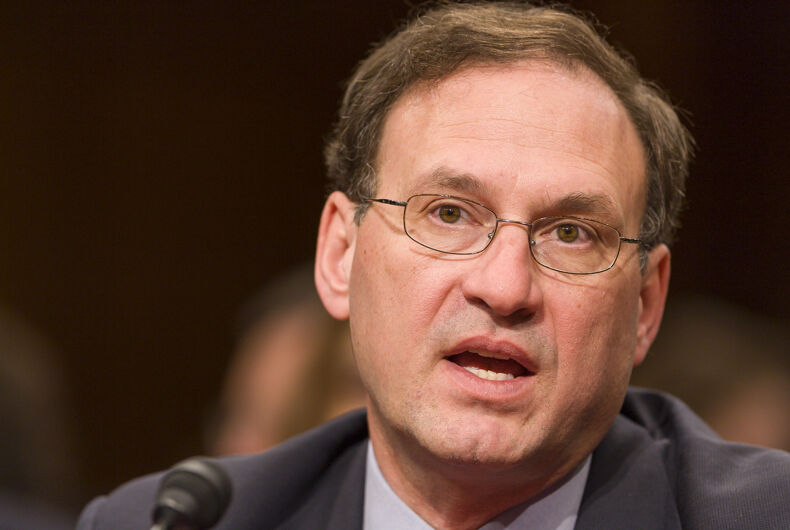 Supreme Court Associate Justice Samuel Alito gave a rare public speech, delivering the keynote address for an event sponsored by the conservative judicial group The Federalist Society. During the speech, he declared that the “great challenges before the Supreme Court going forward will be to protect freedom of speech,” because previous rulings and lawmakers have limited or plan to limit it.

He specifically mentioned that Obergefell v. Hodges, the 2015 ruling that cemented marriage equality, as such a case. He then defended Masterpiece Cakeshop v. Colorado Civil Rights Commission, the 2018 ruling that sided with the owner of a bakery who refused to serve a same-sex couple on the basis of religious liberty.

“You can’t say that marriage is a union between one man and one woman,” Justice Alito alleged. “Until recently, that’s what the vast majority of Americans thought. Now, it’s considered bigotry. That this would happen after our decision in Obergefell should not have come as a surprise,” citing his dissenting minority opinion in the case.

This reaffirms hopes that he signaled in legal opinions earlier this year along with Justice Clarence Thomas that Obergefell should be overturned.

With fellow originalist Amy Coney Barrett’s recent confirmation to the bench, a clear majority of the justices on the Supreme Court are conservative-leaning, and Justice Alito is considered the “most conservative” of them all.

By continuing to gripe on Obergefell‘s ruling, Alito signaled to proponents of anti-LGBTQ discrimination under the gauge of religious liberty, and those that still “cling to traditional views on marriage,” that they have support on the highest court in the land.

Alito also reaffirmed his decision in Masterpiece Cakeshop v. Colorado Civil Rights Commission, noting that “as far as I’m aware… [there is] no reason to think [bakery owner] Jack Phillips’ stand would deprive any same-sex couple of a wedding cake. The couple that came to his shop was given a free cake by another bakery and celebrity chefs have jumped to the couple’s defense.”

Alito now condemns Washington State for requiring pharmacies to carry Plan B, “which destroys an embryo after fertilization.”

He also criticizes the Colorado civil rights commissioner in Masterpiece Cakeshop who said “freedom of religion” can be used for discrimination.

And here is Justice Alito defending Masterpiece Cakeshop’s Jacks Phillips for refusing to bake a cake for a same-sex couple. Alito notes that the couple was offered a free cake elsewhere, then supported by “celebrity chefs.” pic.twitter.com/hZxdFJHyEI

The keynote was given virtually on November 12 for the 2020 National Lawyers Convention, held during the last week to address “[t]he Rule of Law and the Current Crisis.” Justice Alito was introduced by Federal Society General Counsel and VP Dean Reuter. Current Secretary of Labor Eugene Scalia, son of late Supreme Court Justice Antonin Scalia, was also a speaker that day.

The Convention was sponsored by the Federalist Society, a key component in instilling conservative judges on the bench. They aim to push back on the “the legal profession…[being] currently strongly dominated by a form of orthodox liberal ideology which advocates a centralized and uniform society.”

Six of the nine Supreme Court justices are current or former members of the group.

During his 30-minute remarks, Justice Alito also levied attacks on several government leaders from the local to federal levels, both legislative and those in “the executive fiat,” over their hopes to realign the Supreme Court. He also cited birth control, restrictions in place due to COVID-19, a blog by a Harvard professor, and Democrat senators signaling support for judicial reform as reasons that the Supreme Court has to do “whatever we can” to protect religious freedom.

He specifically named the government in Washington state that set requirements for pharmacies to carry ‘Plan B’ contraceptives and Nevada governor Steve Sisolak’s apparent favoring of casinos over churches in COVID-19 pandemic restrictions.

“It pains me to say this, but in certain quarters, religious liberty is fast becoming a disfavored right,” Justice Alito claimed.

That was easily the most political speech I’ve ever seen delivered by a Supreme Court justice. Wow. Same-sex marriage, guns, abortion, contraception, persecution of the Federalist Society … he really squeezed it all in there. Yikes.

“One of the great challenges for the Supreme Court going forward will be to protect freedom of speech. Although that freedom is falling out of favor in some circles, we need to do whatever we can to prevent it from becoming a second-tier constitutional right.”

“For many today, religious liberty is not a cherished freedom,” he also said. “It’s often just an excuse for bigotry and can’t be tolerated, even when there is no evidence that anybody has been harmed….the question we face is whether our society will be inclusive enough to tolerate people with unpopular religious beliefs.”

Politico labelled the address as an “unusually inflammatory public speech,” noting that “it is uncommon for a justice to weigh in on hot-button topics like abortion or gay rights in speaking appearances open to the press or public.”

CNN wrote that this Alito’s “frustration may flow from a view that his conservative brethren have failed to be sufficiently vigilant,” because they have sided with the liberal wing of the court on occasion, while he has remained staunchly to the right in many of the Court’s recent rulings.

Congressman Jimmy Gomez (D-CA) remarked on Twitter that Justice Alito’s words were “stunning” and “harmful” because “homophobic rhetoric isn’t a matter of free speech. It’s a matter of hate speech.”

Both Gomez and Warren noted actions they have introduced – a resolution by Gomez and other members of the LGBTQ Equality Caucus, and a Senate bill by Warren that “restores some integrity to our Court by forcing Justices to follow the ethics rules other federal judges follow.”

Yikes. Alito condemns Obergefell, the same-sex marriage decision, and says it has led to censorship of people who believe marriage is “a union of one man and one woman.” Says freedom of speech is “falling out of favor in some circles.”