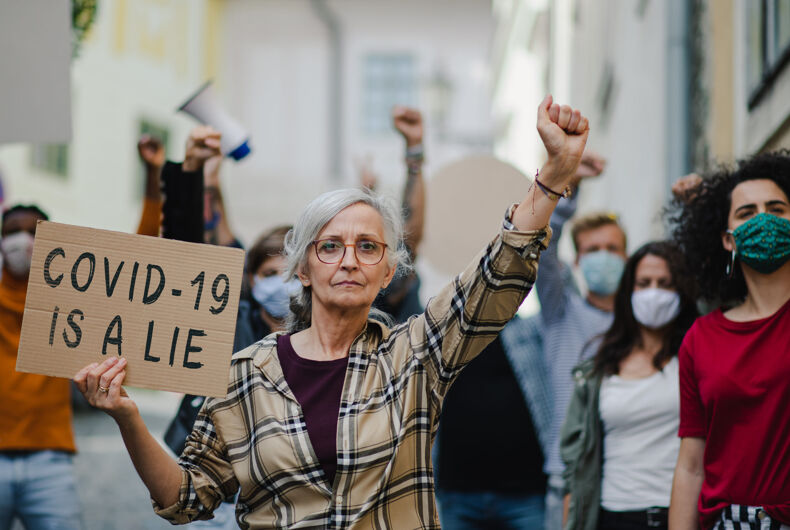 A older woman protestor holding a "COVID-19 IS A LIE" sign.Photo: Shutterstock

I WILL NOT TRADE MY ‘FREEDOM’ FOR YOUR SAFETY!”

A large sign held by a man and a woman after leaving a Donald Trump campaign rally carried these words in giant typeface. Above the wording on the sign, they placed two stickers, the American flag and the so-called Gadsden flag, named after general and politician Christopher Gadsden (1724-1805), with the famous American Revolutionary motto flag “Don’t Tread On Me” below a coiled timber rattlesnake ready to strike.

The man holding the sign on the right side was dressed as a want-to-be of Sheriff Joe Arpaio, the notorious over-the-top officer accused of racial profiling and abusive treatment of residents in his Arizona town. The man wore a black wide brimmed hat, black shirt, blue jeans, boots, and around his waist a thick leather belt attaching a holster and pistol.

The women on the left sported a red, white, and blue with white stars “President Trump” baseball cap, Trump T-shirt with a decal of her fearless leader speaking in front of a large rally crowd with a giant U.S. flag, blue jeans, and jogging shoes. In her left hand and hanging over her left shoulder, she toted a wooden pole holding a large U.S. flag.

“I WILL NOT TRADE MY ‘FREEDOM’ FOR YOUR SAFETY!” (while not spelled out this succinctly) was also the message delivered by a gang of highly armed mostly male self-described militia protestors at the Michigan State Capitol.

Their intent was to intimidate the state legislature into overturning all restrictions directed by the legislature and Governor Gretchen Whitmer to curb the Coronavirus pandemic – including, but not limited to: wearing face masks, socially isolating, limiting appearing in groups, and closing of some businesses.

President Donald Trump, who has continually downplayed the pandemic, spired on the protesters with his “Liberate Michigan” tweet storm. Trump, who has understood the deadly seriousness of the pandemic since late January 2020, failed to take necessary leadership to mount a national strategy that could have significantly reduced the pain, the fear, number of infections, and most of all, the over 250,000 deaths.

Today, though the U.S. represents only 4 percent of the world’s population, we comprise 20 percent of Coronavirus deaths. Yes, Donald Trump is complicit in the genocide of the American people with his battle cry of “personal freedom” and individuality over community.

Researchers have charted cultures as falling along a continuum with several variables, including Individualism versus Collectivism: the degree of support for and emphasis on individual goals versus common or collective goals. Most of these same researchers place the U.S. and many other Western nations on the “Individual” side of the continuum.

A Social Contract during a Deadly Pandemic

Parents and other adults have the inherent responsibility of protecting young people from harming themselves and being harmed by others, and of teaching them how to live and function in society within our ever-changing global community.

In Freudian terms, we must develop a balance between the individual’s unrestrained instinctual drives with restraints (“repression”) on these drives to sustain the life of the individual and to serve in the maintenance of society (civilization).

For example, adults must teach the young not to touch hot stoves and radiators and not to stick their fingers into  electrical outlets. We must train them to wait for the traffic light to turn green and then to look both ways before crossing streets. When they are not feeling well, we need to keep them at home to begin to heal while not infecting their peers and educators.

We as a society, nonetheless, must set a line demarcating protection from control, teaching from domination, minimal and fundamental repression from what philosopher and psychologist Herbert Marcuse terms “surplus repression,” that which goes over and beyond what is necessary for the protection of the individual and the smooth functioning of society and enters the realm of domination, control, and oppression.

Where does a society place that demarcation line on the extended continuum, separating protection and the smooth functioning of community from surplus repression and oppression?

In comes the theory of a “Social Contract,” developed as far back as ancient Greece. Though iterated, reiterated, and reformed by numerous philosophers and public figures, the foundations of this social contract stand on the premise that people live together in community with the agreement that establishes moral, ethical, and overarching political rules of behavior between individuals, groups, and their government in the formation of a civil society.

A violation by any of the signatories – individuals, groups, governments – jeopardizes the very stability of that progress toward a fully civil society.

The ancient Greek philosopher, Aristotle, wrote his Politics (Greek: Πολιτικά, Politiká) whose title means literally “the things concerning the polis.” A polis (plural: poleis) was the typical organization of a community in the ancient Greek world.

“Politics” can be defined as the way people living in groups make decisions, and about coming to agreement so people can live together.

Politics rests on issues of power, regarding having control over one’s life and influencing others. People and groups holding power in influencing others must follow the axiom that bioethicists and healthcare workers follow: Primum non nocere, or “First, do no harm.”

A Philosophy of Selfishness

Ayn Rand has become the intellectual center for the economic/political/social philosophy of Libertarianism. She constructs a bifurcated world of one-dimensional characters in her novels.

On one side, she presents the noble, rational, intelligent, creative, inventive, self-reliant heroes of industry: of music and the arts, of science, of commerce and banking who wage a noble battle for dignity, integrity, personal and economic freedom for the profits of their labors within an unregulated “free market” capitalist system.

On the other side, she portrays the “looters” represented by the followers: the irrational, the unintelligent, the misguided, the misinformed, the corrupt government bureaucrats who regulate and manipulate the economy to justify nationalizing the means of economic production; who confiscate personal property, who deliver welfare to the unentitled, who thereby destroy personal incentive and motivation resulting in dependency.

In other words, Rand paints a world in which the evil and misguided takers wage war against the noble and moral makers.

In her Appendix to Atlas Shrugged, she wrote: “My philosophy, in essence, is the concept of man as a heroic being, with his own happiness as the moral purpose of his life, with productive achievement as his noblest activity, and reason as his only absolute.”

Rand bristles against some long-held notions of collectivism, of shared sacrifice and shared rewards. Rather, she argues that individuals are not and should not be their brother’s and sister’s keepers, but that one must only do unto oneself. That one must walk only in one’s own shoes and not attempt to know the other by metaphorically walking in their shoes; that personal happiness is paramount; the greatest good for you rather than the greatest number of people.

Ayn Rand’s philosophical essence accords with the axiom, live and let live. She advocates for a “rational selfishness.” She titled one of her non-fiction books, The Virtue of Selfishness.

The organization, Character Counts, enumerates its “6 Pillars of Character,” as “core ethical values that transcend cultural, religious and socioeconomic differences.” These Pillars are: trustworthiness, respect, responsibility, fairness, caring and citizenship.

Breaking any of these essential pillars seriously jeopardizes the stability of the entire structure, whether that be the family, the group, the culture, the nation, or the world.

If anything brings down these United States, if this noble democratic experiment of government of the people and by the people fails, it will not be through a foreign invasion. It will be the result of our neglecting any of the primary 6 pillars.

It will be through the domestic virus of over-inflated self-interest rather than concern for community and the natural environment – an unbridled selfishness in the guise of “freedom,” in the accumulation of more wealth and resources than any individual or family will ever need to sustain a high quality of life.

It will be because too many individuals reject the notion that it truly takes a village to raise a child.

Unfortunately, a violation or refusal to sign onto any of the signatories – individuals, groups, governments – of the Social Contract jeopardizes the very stability of progress toward a fully civil society.

During a pandemic, it results in death.