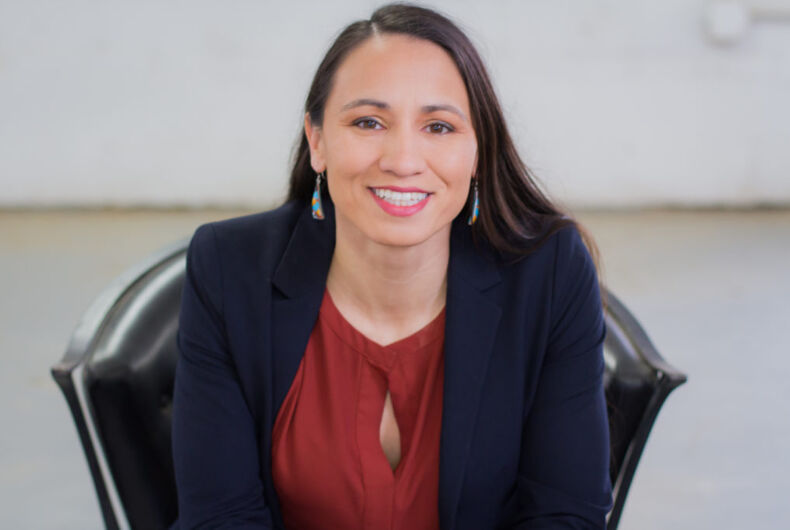 In 2018, Rep. Sharice Davids (D-KS) made history as the first out LGBTQ person elected to Congress from Kansas, as well as one of the first Native American women in Congress.

Today, she is vying to keep her seat to serve Kansas’ third district for a second term. In the final hours before the polls close, Davids told LGBTQ Nation she is invigorated by the large early voting numbers.

Related: Here are five reasons you should be optimistic leading into Election Day

“So many people are so engaged,” she said, “and I think it would be exciting to see this many people engaged no matter what, but then when you think about just how hard everything feels because of the pandemic, and we’re in this long overdue conversation about racial justice in this country, and it feels like in light of everything that’s going on, there are so many people trying to make their voices heard in our democracy, and it’s a good reason to have hope.”

During her first two years in Congress, Davids said one of the biggest lessons she has learned is how important it is to really listen to people.

“There are just so many things that have been highlighted during this pandemic that show us our economy, our healthcare system, they don’t work for everybody,” she said. “And the best way to make sure anything we do to get relief to folks, if it’s going to be effective, is to listen to what people really need.”

Despite working with the challenge of what Davids described as an administration with a “chaotic” approach to almost everything, she also said she has a lot to be proud of accomplishing in her two years in office.

One of the first campaign promises she kept, she said, was to open an office in Wyandotte County, one of two complete counties in her district. Until Davids took office, only the other county, Johnson, had an office.

“I think people sometimes don’t realize that their member of Congress can help them navigate the federal government, and one of the ways we’ve been able to really connect with a lot of people is [opening that office]. And then we do pop up office hours because we also have a portion of the more rural county, Miami County, and it’s really important to try to meet people where they’re at.”

The congresswoman added that she is incredibly proud of the team running those offices.

She is also proud of the legislation she has sponsored or been part of passing through the House of Representatives, like the For The People Act, the Equality Act, the Violence Against Women Act, and “dozens of bills to bring down the costs of healthcare and prescription drugs.”

All my life, I've faced big challenges: raised by a single mom, worked my way from community college to the White House. I haven't stopped in Congress.

Watch our final ad of this election: pic.twitter.com/P0RmcGv2rN

Looking toward her second term, Davids said her priorities haven’t changed, but rather have been reinforced by what the pandemic has done to the country.

“This pandemic has impacted literally every aspect of our lives,” she said. “I think the top priority for all of us should be getting a bipartisan coronavirus relief package. People are suffering and we need to make sure we get support to our state and local governments because they perform very essential functions for so many people.”

Unemployment relief should continue to be a key focus right now, she said, along with protecting people with preexisting conditions, reducing the cost of prescription drugs, and ending surprise medical billing.

“The things we’ve been working on have been our priorities and my priority, but now it is so clear why that has to continue to be what we push for,” she said.

Davids emphasized that even on this final day, there is still work we can do for this election—and for those in the future.

“If you’ve already voted, I hope you’re helping other people get to the ballot box. I know a lot of people are – for the first time – voting in this election, and I just hope folks continue to stay engaged, that folks continue to encourage others to vote. The more we exercise our right to vote, the stronger our democracy is.”

Regardless of the outcome of the many races around the country today, Davids said the level of engagement and enthusiasm surrounding this election—along with the number of LGBTQ+ candidates, women candidates, and candidates of color—will help her remain optimistic.

“I often say in 2018 we saw a resetting of expectations about who runs for office, about who we support, about the ways we support people, and this year we’re seeing the continuation and the expansion of that,” she said.

“The fact that we have so many people who see a future for themselves and for their children and grandchildren in this country, and the number of people who are engaged in trying to shape that future, that is literally the manifestation of hope.”