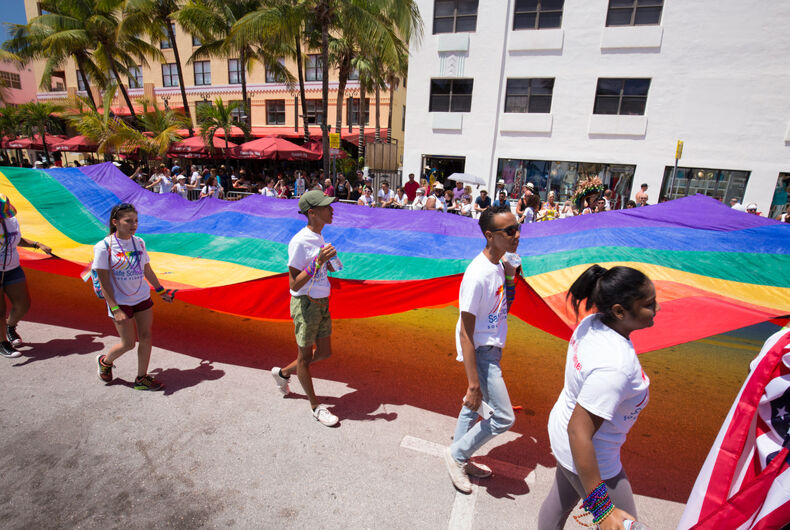 A group in Florida carries a rainbow Pride flag.Photo: Shutterstock

For months now, everyone has been bombarded with the message that this is the most important election of our lifetimes. An avalanche of mail, text messages and online ads tell us that the stakes are high. We constantly hear that we must vote “as if our lives depend upon it.”

I’ve been an enthusiastic part of delivering that urgent message. This may seem a bit contradictory to that, but with just the hours to Election Day passing by, I want to tell everyone to do one thing: breathe.

Breathe, relax your shoulders, and get off the emotional rollercoaster of poll tracking or doom-scrolling on Twitter.

The next few days are going to require us to cultivate an attitude of hope and determination, something more than dread and stress. Our work isn’t just “a few more days” from being over. Election Day is a milestone, not a finish line — and we need to get ourselves mentally ready for the work ahead for us, regardless of the outcome.

The election result will dictate if the road gets more dangerous and even steeper, or whether the wind will be in our sails as we navigate the still-treacherous waters for some time to come. Either way, it is a journey we must continue on.

America is in the midst of a reckoning. Society is confronting racist systems, exposing gender-based violence, and calling out the exploitation of immigrant communities that have remained in place since the founding of our nation, that have been normalized throughout our history. Dismantling the myths of America is the only way to make the promise of this country truly available to all.

Not only do we need hope in order to keep doing the work in front of us, we have to be grounded in hope because we are constructing a future that must include place and security for us all, even those clinging to fear of a diverse, multicultural, and inclusive future.

For people who benefit from these systems, calls to equity stir deep fears of loss of power. Trump has plucked the strings of that terror at every turn over his ascension to the Presidency and in office.

If Tuesday brings us defeat, we must avoid a despair that saps our will to do the work. However, if Tuesday brings us a victory, we must also discipline ourselves to keep building on our power and avoid any complacency. That could squander the opportunity for big, structural and lasting change.

So I’m going to tell you five reasons why I am meeting these last few days until the election with optimism instead of fear.

I’m optimistic because we have turned angst into action.

This election, Equality Florida Action PAC and our state political committee launched the largest and most ambitious voter mobilization program in our organizations’ history. We’ve invested $1.5 million in reaching 560,000 pro-equality voters across the state — voters for whom LGBTQ issues are a litmus test, but who did not or could not regularly participate in the electoral system.

Our investment has already convinced nearly 90,000 voters who did not cast a ballot at all in 2016 not only to vote, but to vote early. In a state where a U.S. Senator was elected by a margin of less than 10,000 votes, and the Governor by less than 30,000, we know our community can decide the outcome of races up and down the ballot.

Every single vote in Florida will matter on Election Day. Do you know where your polling location is?

Make your plan to VOTE on Election Day: https://t.co/64UDSIfYKV pic.twitter.com/W34LIywthi

Our expanded field team has worked with hundreds of volunteers to send more than one million text messages and to make 250,000-plus phone calls. We have sent 650,000 pieces of mail and launched digital ads generating over 11 million impressions to get out the vote. We have had voters take selfies with our letters and notices, tagging us online or requesting extras to frame or share with friends.

That’s because our community is hungry for campaigns that talk about protecting our jobs, making schools safe, addressing hate violence, and preserving marriage equality.

This election cycle has been a breakthrough. We’ve been able to increase turnout exponentially due to early and unprecedented investment in mobilizing pro-equality voters from funders. It has required breaking free of the usual, well-worn ruts of election spending, but the roadmap we’ve built in Florida is one that could be used in other states and impact the outcome of races up and down the ballot.

I’m optimistic because the emerging generation is flexing.

Early voting among people aged 18-29 is up across the country, including in Florida, where the youth vote is almost double what it was four years ago. Polling from CNN shows that there is reason to believe those numbers will remain high through election day: enthusiasm to vote among those 18-34 is at 51%, compared to 31% in 2016.

By wide margins, young voters are committed to racial justice, LGBTQ equality, and embracing diversity and inclusion in many more ways than their grandparents. Their votes are now counterbalancing those in older voting blocs, who are more wary of a changing, diverse world. Young leaders are engaging in street protests and electoral organizing in new and powerful ways. Their leadership and engagement is about to change the landscape dramatically.

I’m optimistic because we are winning the battle for hearts and minds.

New polling by PRRI shows 70% of Americans – an all time high – are in favor of allowing gay and lesbian couples to marry legally, including the majority of most political and religious groups. 83% of Americans favor laws that would protect gay, lesbian, bisexual, and transgender people against discrimination in jobs, public accommodations, and housing, compared to only 16% of Americans who oppose such laws.

This year, everything is on the line: our healthcare, equality, our future. That's why we're all in for Biden-Harris! Are you with us?

When you vote, we win. 🗳 Make a plan to vote today: https://t.co/AyQTPbQAb2 pic.twitter.com/LlnL5A9LWe

I’m optimistic because our opposition is desperate and losing.

In Florida, LGBTQ and pro-equality candidates are winning. Meanwhile, homophobic incumbents are losing. Candidates with histories of harming the LGBTQ community are trying to hide their voting record.

For example, Jason Brodeur, a former legislator running for the Florida Senate, pushed legislation to allow adoption agencies to reject LGBTQ prospective parents in 2015. The measure was so extreme that fellow Republicans voted to stop his bill. Now in a tight race against a pro-LGBTQ candidate, Patricia Sigman, Brodeur is flat out lying to voters, claiming he was responsible for ending Florida’s ban on gay people adoption. That law was found unconstitutional by a federal judge in 2010.

Even conservatives have trotted Donald Trump’s second daughter, Tiffany, to travel the country at poorly attended “Trump Pride” events and brag about their “LGBQ friends”. The absence of the T was telling.

The Republican packing of the federal judiciary with under-qualified, far-right partisans is a source of well-justified stress and anxiety. In addition to the high-profile appointment of three Supreme Court justices, Trump has made a slew of lifetime appointments of anti-LGBTQ federal judges after Senate Majority Leader Mitch McConnell spent over a year blocking Trump’s predecessor, Barack Obama, from rightfully making appointments.

Yes, the Supreme Court is a much more dangerous body than it was four years ago, but the desperate court packing is also evidence that the far right knows the tide in the country is shifting. Senator Elizabeth Warren hit the nail on the head after the rushed appointment of the latest justice.

“This is a dark day,” she said. “But it’s important to remember why Republicans fought so hard to steal this Supreme Court seat. They’ve realized a truth that shakes them to their core: The American people are not on their side. And we’ll keep fighting until we take our democracy back.”

I’m optimistic because our community has faced these challenges before, with less support and fewer resources – and won.

In the 1980s, Ronald Reagan ignored a growing pandemic that decimated our community. His press secretary cracked jokes with reporters about the ‘gay plague.’ The Supreme Court of the United States was hostile to LGBTQ people, siding with police in a 1986 ruling that had broke in on a gay couple in their home having sex.

The Court ruled that loosely defined sodomy laws, which could deem anything but missionary sex between heterosexuals a crime, as constitutional. It would be thirteen years before a new ruling struck down such laws.

Against those odds, we did not curl up and hide. We did not shrink from the fight. We organized our own response to the pandemic. We demanded dignity and respect. We provided support where families and the health care system fell short. We showed that family was not defined by blood but by love. And, we made space for joy and hope together.

I know the majority of voters in America reject Trump’s racist, xenophobic, selfish and cruel vision for this country. That should be enough to end his corrupt tenure. The electoral college, however, has given Republicans a clearly built-in advantage that allows them to govern while having a minority of the public’s support. Trump is one of five presidents who won their election despite losing the popular vote. None of them were Democrats.

So I am ready for any outcome. I’m prepared to fight for every vote to be counted, and I’m committed to the longer work of rebuilding America into a country that protects the vulnerable, respects equality and lives out the principles of equality and justice for all.

Nadine Smith is the Executive Director of Equality Florida, the state’s largest organization dedicated to ending discrimination based on sexual orientation and gender identity. Visit them on Facebook and Twitter.