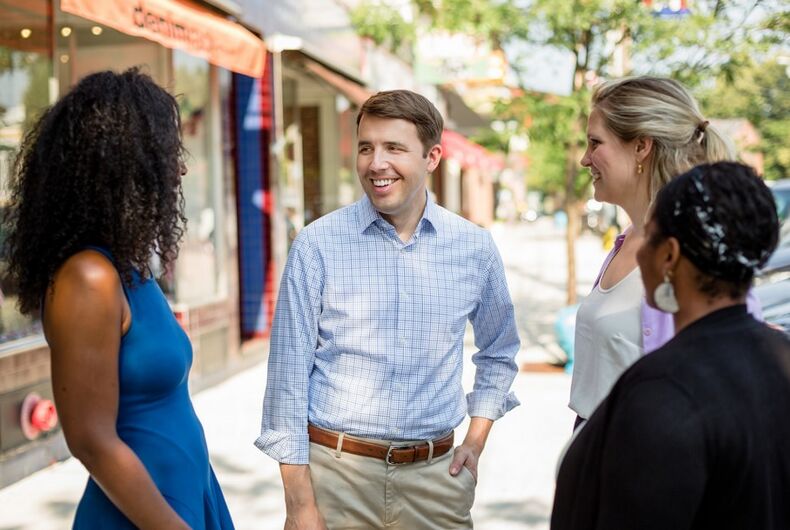 Chris Pappas, the first out member of Congress from New Hamp is keeping his seat in the House of Representatives, representing New Hampshire’s 1st Congressional District.

He will be the first member of Congress to hold that seat for more than one consecutive term since Carol Shea-Porter, who was elected in 2006 and again in 2008.

“The voters sent a clear message: they are tired of divisive politics and we must put the people of New Hampshire first,” Pappas said in a speech in front of a small crowd and broadcast on Facebook Live.

With approximately 51 percent of the vote, Pappas held off challenger Matt Mowers, who had 45 percent of the vote. As of 2:00 AM, with 90% of precincts reporting, the Associated Press and NPR have called the race in Pappas’ favor.

Mowers won the primary for the Republican nomination over out conservative Matt Mayberry. The Log Cabin Republicans, the coalition for LGBTQ members of the party, endorsed Mowers over Mayberry, who formerly worked within their leadership. They chose Mowers over the out candidate, both before the primary was complete, and since.

Mowers was executive director of the New Hampshire GOP, which opposes marriage equality. He refused to try and change the group’s stance as he doesn’t believe governments should regulate marriage.

Pappas’ seat, which has flipped between the Democratic and Republican parties five time in the last 15 years, were officially a prioritized seat for the GOP.

From the bottom of my heart—thank you, New Hampshire!

I just finished delivering some remarks about the important work ahead for the people of #NH01: https://t.co/Y7ttrK3M9V #NHPolitics https://t.co/nyQIkoNhv5

We’re live in Manchester with an election update.

Posted by Chris Pappas for Congress on Tuesday, November 3, 2020