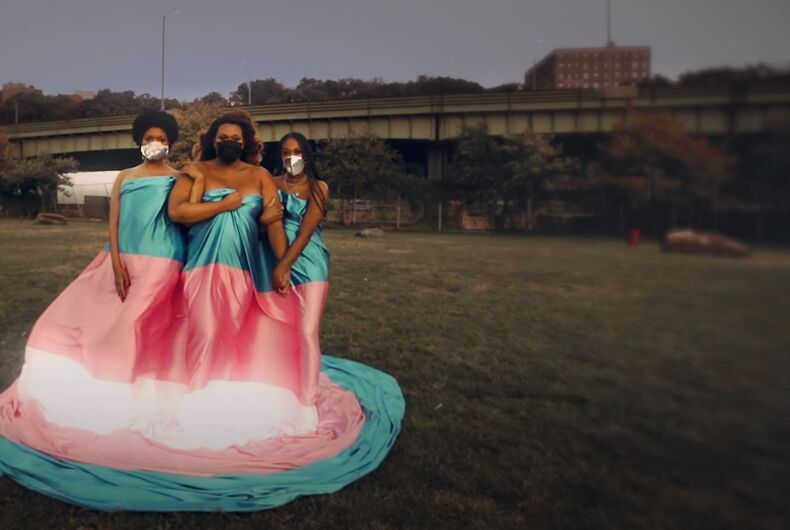 2020 has been the deadliest year on record for transgender people with at least 37 transgender or gender non-conforming people have been killed in the United States, and most of the victims were Black women. As we mourn their loss on the Transgender Day of Remembrance, NMAC joined forces with Deja “Lady Davenport” Smith, Peppermint, and Mila Jam to highlight the most important reminder of the day.

No matter how hard they try, we survive.

Related: Will the next surgeon general be a transgender woman?

NMAC, former known as the National Minority AIDS Council, said they wanted to provide “a look at how trans women of color exist in everyday life, as everyday humans, while also serving as a tribute to honor their sisters who have been taken away from us too soon.”

“We hope that the more visual representations there are showing how resilient and powerful they are forced to be on a daily basis, that hopefully we can put a stop to the senseless murders continually happening around the world,” Josh Drake, director of photography and editor for the project, tells LGBTQ Nation. “While remembering the victims, we also hope to take note of how strong and successful our women – Mila, Deja, and Peppermint – truly are. The National Trans Day of Remembrance is a day that we mourn the losses, but also celebrate the major strides that the trans community has made.”

“Today is an important day for us all to reflect on those who we lost, and celebrate those who are still here,” said ​Peppermint.​ “The video either directly or indirectly addresses the lives of trans people of color, who are still today affected by an incredible amount of grief. It truly is life imitating art. And as heavy as this is on my heart, being able to gather with friends and fellow artists to create this meaningful video feels wonderful.”

“The message of this video is important because we’re at a point in history where many violent attacks and murders of trans people, specifically trans women of color, are unreported or unsolved,” said ​Deja “The Lady Deja Davenport” Smith. ​“Studies show that 80% of Americans have never met a trans person, however, our government passes sweeping legislation that affects the lived experiences of trans people. With our civil rights and livelihoods on the line, we need to spread the message that trans people have always been here. Our experiences are valid and we will not be erased.”

“For me, this project is about never giving up on yourself. It’s extremely hard for trans folk, especially trans women of color, to find safe spaces and support. We must be protected and respected,” said ​Mila Jam. ​“It’s also about sisterhood. I don’t know where I would be without my sisters. They keep me sane, grounded and filled with love. This message is so important now because more than ever, trans women are actually thriving. Even though we are still being murdered at extremely high rates, we are letting our presence be known. We are fighting for our happiness. We must celebrate our resilience. And you don’t have to be trans to feel the message. This is for everyone who has been pushed aside. We are alive.”

Only 14% of LGBTQ people voted for Donald Trump. The last poll was flawed.