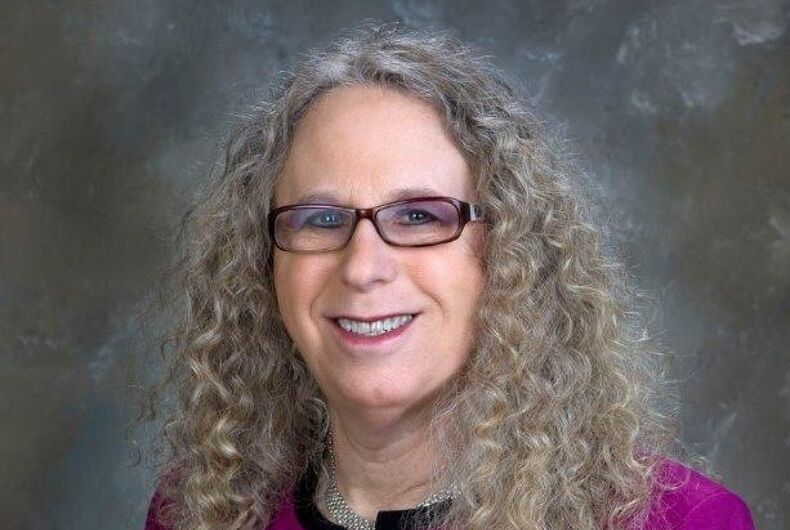 Will President-elect Joe Biden choose a transgender woman as the next U.S. Surgeon General? There’s a possibility.

Dr. Rachel Levine, Pennsylvania’s secretary of health, is being considered as a potential nominee. Dr. Levine has expertly navigated the coronavirus pandemic in her state while withstanding a deluge of far-right attacks and transphobic insults from both citizens and Republican politicians.

Related: Wearing a mask is unmanly (and other reasons female world leaders are better at fighting coronavirus)

The Surgeon General is nominated by the president and confirmed by the Senate. If Republicans keep the Senate, Majority Leader Mitch McConnell has said he will delay or try to kill Biden’s nominations to fill key Cabinet roles – including the Surgeon General.

With coronavirus cases continuing to surge nationwide, Dr. Levine would be a natural pick for the position tasked with keeping Americans safe and healthy.

“I’m feeling very confident and very hopeful that we will see trans people serve in high-level roles in this administration,” Ruben Gonzales, vice president of LGBTQ Victory Institute and head of its presidential appointments initiative, said. “Dr. Rachel Levine has served Pennsylvania incredibly well as their secretary of health for a number of years, leading their response on COVID, and leading their response on the opioid crisis in Pennsylvania. I think someone like her is well-poised to serve at a high-level in a Biden administration.”

Gonzales says the organization has had informal conversations with Biden’s transition team.

The initiative provides incoming administrations with the names and backgrounds of qualified LGBTQ people that could serve in various government positions. The LGBTQ Victory Fund is nonpartisan and works to get queer people elected to office.

One of Dr. Levine’s biggest worries currently, she told LGBTQ Nation, is that people have politicized public health.

Levine said she absolutely believes there is reason to have hope.

With Trump supporters furiously demanding that they have the right to potentially infect strangers and loved ones with an infectious and deadly disease, Dr. Levine has been mocked frequently because she is transgender. Throughout it all though, she has been continually focused on saving lives.

She went on to address the continued suffering of LGBTQ people, adding, “Frankly, I do not have time for intolerance. My heart is full with a burning desire to help people. And my time is full with working toward protecting the public health.”

While the apologies are nice, she told LGBTQ Nation at the time, they’re meaningless if they aren’t followed up with action.

“I think that we need to continue to educate people about LGBTQ individuals,” she said. “We are just here, we’re part of the community. We are doctors, we are nurses, we are teachers. We work in restaurants. We work everywhere, and it’s our children. So I think if an apology means, ‘Okay, I apologize. This is all done,’ then it is insufficient.”

“We need people to continue to work on changing that harassment and discrimination that LGBTQ individuals face, and one way to do that is through education and advocacy. So I think if someone apologizes, it is incumbent upon them to advocate for the LGBTQ community.”

As surgeon general, Dr. Levine would be able to do just that – advocate for the LGBTQ community. And she would do it unapologetically.