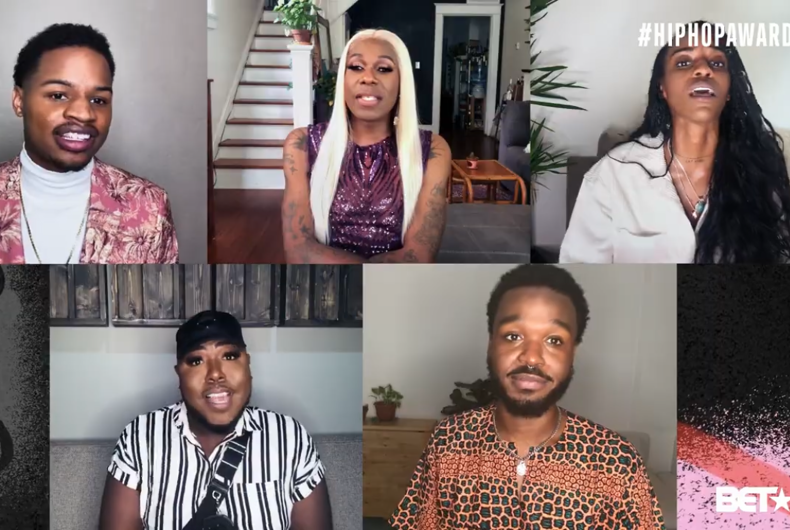 Black Entertainment Television (BET) is launching “BET FoQus,” which is an original digital series that “celebrates the diversity of the Black queer community,” the media entity announced this week.

The digital show started airing on November 1, 2020 with an episode featuring question-and-answer sessions with out Black musicians such as Big Freedia, DreBae, and Saucy Santana.

The 13-minute debut was previewed during the BET Hip Hop Awards, broadcast earlier this week on October 27.

“From intimate accounts of homophobia within the hip hop industry to navigating being an out music artist to giving advise for up-and-coming queer artists, no topic is off-limits,” the network shared in a statement.

BET FoQus is the rebrand and expansion of the network’s “Queer as F**k” social campaign, launched this time last year to success. In February, the network, which is owned by CBS/Viacom, ran a social media campaign highlighting Black LGBTQ people using the hashtag, #29DaysofQueerExcellence.

That month, they shared quotes from B. Hawk Snipes, Kendrick Daye, and other Black LGBTQ entertainers that explained why they are proud to be out.

They also included out public figures like  Jaboukie Young-White, Janet Mock, Angelica Ross, and Ritchie Torres in their Black History Month celebrations. Young-White, most known as a correspondent on the late night comedy series The Daily Show, was among those included in The Future 40 list.

Mock, Ross, and others were featured in a series of daily-changing Black Excellence Trilogy features.

Hip Hop is all self-expression and you know I have something to say. #HipHopAwards x #BETFoqus. 💫 pic.twitter.com/wZSWzTUGiV

.@AngelHaze talks about what inspired her to pursue a career in music. #HipHopAwards

In the debut episode, “BET FoQus Presents: Something To Say,” five out rappers – DreBae, Big Freedia, Angel Haze, Saucy Santana and Cakes Da Killa – discuss their experience at the intersection of the Black, LGBTQ, and hip hop communities. They also offer their perspective on the state of hip hop music today and trailblazers of the pass.

For example, Big Freedia describes how entertainers like RuPaul and Sylvester inspired her artistry. Angel Haze talks about her religious background and how that affected her experience coming to prominence in music.

BET encourages people to use its newest hashtag, #BETFoQus, to “join the dialogue and celebrate the beauty, power, and diversity of the black queer community” as highlighted in the series.

Twitter is dying of laughter at Trump’s impotent rage after he demands states “STOP THE COUNT!”