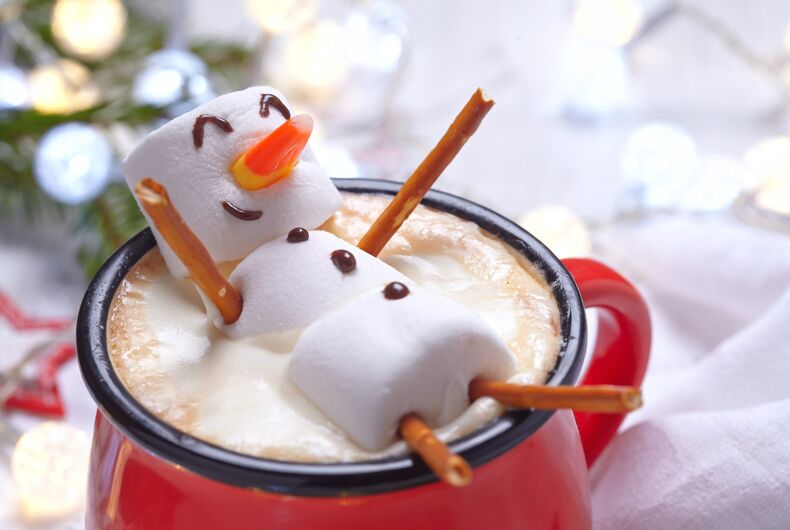 When people wish others a “Happy Holiday Season” or just “Happy Holidays,” what exactly do they mean? This “season” usually begins sometime around the end of October and lasts through December until the first day of January, “New Year’s Day.”

Thanksgiving in the United States commemorates that mythical and highly romanticized occasion when the “Pilgrims” and the “Indians” shared a “joyous” meal together. If we are wishing people a “Happy Holiday Season” between Thanksgiving and New Year’s, whom are we including?

Related: We asked Hallmark for a gay Christmas movie. Conservatives were scared and created a fake petition.

I suppose we cannot include Hindus, Jains, and Sikhs, some of whom celebrate Diwali (Festival of Lights), observed beginning in late Ashvin (between September and October on the Christian Gregorian calendar) and ending in early Kartika (between October and November).

And what about the estimated 26% of U.S.-Americans (according to the Pew Research Center) who define themselves as “religiously unaffiliated,” “atheist,” “agnostic,” “freethinker,” or “non-believer,” as well as members of some religious sects, for example, Jehovah’s Witnesses, many of whom do not celebrate any holidays?

What events are we including in our “Season’s Greetings”? A major happening that comes to mind is the winter solstice in the Northern Hemisphere: that exact split second — usually occurring on December 21 or 22 on the Christian Gregorian calendar — when the earth’s axial tilt is farthest from the Sun.

Also called the “first day of winter” in the Northern Hemisphere, the winter solstice marks the seasonal reversal when days begin their gradual lengthening and nights shorten. Many groups celebrate the winter solstice several ways, from sharing a meal to lighting candles, hanging lights, and having song and dance fests.

Furthermore, in December, among many other celebrations, there’s Chanukah, also known as the “Festival of Lights,” an eight-day Jewish holiday observing the re-dedication of the Second Holy Jewish Temple in Jerusalem in 3593 on the Jewish calendar (167 BCE on the Christian Gregorian calendar), when the Maccabees conducted a revolt for independence.

Chanukah begins at sundown on the 25th of Kislev on the Jewish calendar, which falls anywhere from late November to late December on the Christian Gregorian calendar. Celebrants light candles each night on candelabra called “menorahs.”

In addition, Kwanzaa, created by Maulana Karenga and first celebrated in 1966, honors African heritage and culture. It is commemorated annually between December 26 and January 1 on the Christian Gregorian calendar. The name was drawn from the Swahili phrase matunda ya kwanza, meaning the “first fruits of the harvest.” Celebrants light candles each night on candelabra called “kinaras.”

Earlier and earlier each year, often now following Halloween in late October, merchants and media begin proclaiming “Happy Holidays.” While many holidays, both religious and secular, occur around this time, “Happy Holidays” is in all actuality coded language for “Merry Christmas” and “Happy (Christian) New Year.” In fact, most non-Christian major holidays do not fall in December.

How many people in the United States really care about or are even familiar with the non-Christian holidays and celebrations that fall around this time of the year? What are these “Winter Parties,” “Winter Concerts,” “Winter School Breaks,” and “Winter Vacations” really about?

I would ask, how many Christians would even have heard of Chanukah had it not usually fallen in December on the Gregorian calendar? Actually, Chanukah is a relatively minor Jewish historical holiday.

While some of its religious significance has diminished over time as traditional Christian religious practice has entered the public square, on critical analysis, the clearly religious meanings, symbolism, positionality and antecedents of generalized holiday observances belie any claims that they have become fully secularized.

The effect of the so-called secularization of religion, in fact, not only fortifies but indeed strengthens Christian privilege by perpetuating Christian hegemony in such a way as to avoid its detection as religion or to circumvent constitutional requirements for the separation of religion and government. Christian dominance, therefore, is maintained by its relative invisibility; and with this invisibility, privilege is neither analyzed nor scrutinized, neither interrogated nor confronted.

Dominance is perceived as unremarkable or normal, and when anyone poses a challenge or attempts to reveal its religious significance, those in the dominant group brand them as “subversive” or as “sacrilegious.”

Examples of Christian cultural imperialism during the so-called Holiday Season are many:

–The constant and prolonged promotion of Christmas music in public spaces and on radio stations; Christmas specials on television throughout November and December each year.

–Christmas decorations (often hung at taxpayer expense) in the public square in cities and towns throughout the United States.

–The president and first lady lighting the “National Christmas Tree” on the Ellipse behind the White House.

There are many other examples, truly too numerous to list.

Our society marks time through a Christian lens. Even the language we use in reference to the calendar reflects Christian assumptions. A few years ago, we heard and read of the coming of the “twenty-first century,” “the year 2000,” and the dawning of “the new millennium.” Among the definitions of millennium in the Merriam-Webster’s Eleventh New Collegiate Dictionary (2003), definition 2a is: “a period of 1000 years.”

Let us not forget, however, that the year 2000 is calculated with reference to the birth of Jesus, and it is therefore the beginning of the next Christian millennium. In fact, definition 1a in the same dictionary defines millennium as: “the thousand years mentioned in Revelation 20 during which holiness is to prevail and Christ is to reign on earth.”

This fact is brought home each time we hear someone mention the date followed by “in the year of our Lord, Jesus Christ.” The century markers BC (before Christ) and AD (anno Domini) are clearly Christian in origin. Therefore, the year 2000 is one important milepost, though for many religious traditions it also marks a heightening of their invisibility.

In addition, we are coming up on the year 4718 on the Chinese calendar (February 3 on the Christian Gregorian calendar). The Chinese calendar is both a lunar- and solar-based calendar. The New Year on the Islamic calendar, or Hijri, announces the year as 1441, which began on the first evening of the month of Muharram, or December 8 on the Christian Gregorian calendar. In addition, we are celebrating the year 2759 on the Karen calendar.

The “Grinch Alert” or “Cultural Pluralism”

Robert Jeffress, senior pastor of the First Baptist Church of Dallas, Texas, a few years ago organized a movement to call the season what it really is — the “Christmas Season” — and he asserted that businesses who display “Happy Holidays” greetings are simply stooping to “political correctness.” Jeffress created a “Grinch List” on his website to expose businesses that he contends are taking Christ out of Christmas.

Simply stated, the pastor is positioning Christians as the real “victims” in the current “Happy Holidays” epoch. In his effort to purge “Happy Holidays” from modern parlance, Jeffress was attempting not only to maintain but also to fortify Christian cultural imperialism — though by all indications he has nothing to fear, since this form of hegemony has a long way to go and most certainly will not be placed on the endangered list any time soon.

We as a society face some choices. We can commit to issues of multiculturalism and social justice: we can learn about and value of other peoples and others’ customs and cultures, ways of knowing, and ways of viewing the world, and we can work for a true realization of the concept of cultural pluralism — a term coined by the Jewish immigrant and sociologist of Polish and Latvian heritage, Horace Kallen, to challenge the image of the so-called melting pot, which he considered inherently undemocratic.

Kallen envisioned a United States in the image of a great symphony orchestra, not sounding in unison (the melting pot) but rather one in which all the disparate cultures play in harmony while retaining their unique and distinctive tones and timbres.

If we are unwilling to begin this journey, however, then as offensive as it is, Pastor Jeffress may have hit on something. At least Jeffress is demanding honesty in expressly naming the reality and calling it what it really is — “the Christmas Season” — and in insisting on the greeting “Merry Christmas” rather than the transparent idiom “Happy Holidays,” which clearly was created to give the impression of inclusivity.

My argument, however, focuses upon a critique of the systemic (and not necessarily individualistic) structures that promote Christian privilege and hegemony within the United States (and I would argue, many other Western countries) in the expression of “Happy Holidays” in the context of the month of December, considering that most cultures’ major holidays do not fall in the month of December on the Gregorian calendar and a large segment of the population celebrates no holidays, religious or otherwise.

I argue that the systemic structures themselves promote Christian imperialism, in which individuals are often unwilling and even unknowing conspirators. Wishing people “Happy Holidays” simply glosses over the Christian assumptions inherent during this time of the year.

Wishing another “Happy Holidays” in December certainly can be very nice, well-meaning, and well-intentioned. If one really wants to be sensitive and inclusive while acknowledging others’ cultural and religious (or nonreligious) perspectives, why not wish people of other faiths “Happy Holidays” during their holidays that are important? Or if they celebrate no holidays, why not be mindful of that fact?

With our society’s use of the generic greeting “Happy Holidays” in December, many of us may intend to promote intercultural awareness and sensitivity. But I would argue that this has the exact opposite effect by giving most of us the excuse not to do our homework in truly investigating other cultures and other forms of celebration.

When we wish others “Happy Holidays” in December, we do not have to think about when others’ major holidays actually occur, and we do not have to acknowledge that many people are not affiliated with religion at all.

While the intent may certainly be well-meaning and heartfelt, the impact is often exactly the opposite. The concept of oppression, then, constitutes more than the cruel and repressive actions of individuals upon others. It involves an overarching system of differentials of social power and privilege exercised by dominant groups over subordinated groups, based on ascribed social identities and reinforced by unequal social group status.

And this is not merely the case in societies ruled by coercive or tyrannical leaders but occurs within the day-to-day practices of contemporary democratic societies such as the United States. “Unpacking” the knapsack of privilege (whether it be Christian, white, male, heterosexual, owning class, temporarily able bodied, native English speakers, and others) is to become aware of — and to develop critical consciousness of — its existence and to recognize how it affects the daily lives of both those with and those without this privilege.

20 positive stories from 2020 to be grateful for