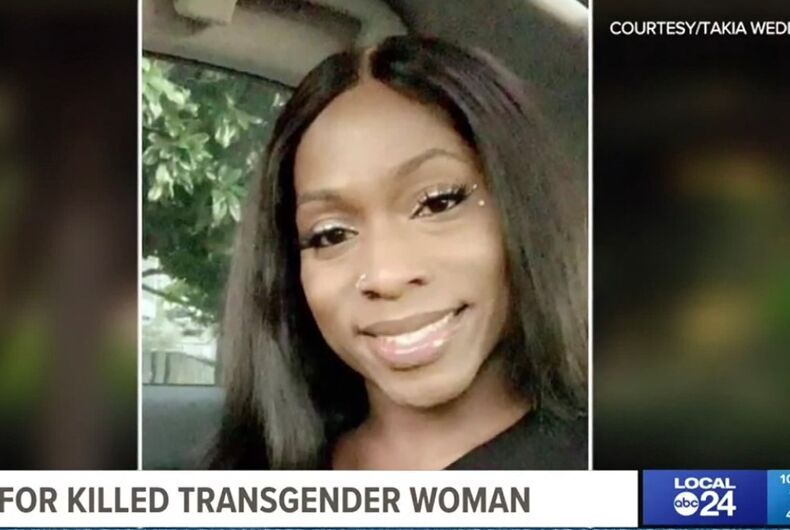 Angel Haynes, a Black trans woman and resident of Jackson, Tennessee, took an overnight trip to Memphis last weekend. She stopped to stay in a motel when her life came to an abrupt, gruesome end.

She is at least the 32nd transgender or gender non-conforming person to be murdered or die violently in this calendar year.

Reports indicate that early on the morning of October 25, Haynes, a cosmetologist by trade, was outside a Motel 6 in Whitehaven, a predominantly African-American residential area in Memphis.

She had contacted her friend, Shinese Weddle, earlier that night, and told her she was going to be staying in the area. Although it was nearly 70 miles away, Haynes promised to call her once she arrived, but apparently never got the opportunity.

Police received emergency calls from the motel and responded at 2:19 AM local time. They found Haynes with at least one gunshot wound to the head.

She was pronounced dead at the scene. She was 25, about to turn 26 in December, family reports.

We are continuing to experience loss within our community.
And we must continue to say their names. #AngelHaynes #blacktranslivesmatter
🌹 🌹 🌹 🌹 pic.twitter.com/GWgWfhbOzn

A mix of one-night guests and temporary residents at the hotel took notice of the commotion that night, with one guest describing their experience to WREG, the local CBS affiliate. “Another guest… described seeing the victim’s lifeless body, moments before emergency crews arrived. He went on to say this was something he will not soon forget,” they report.

The OutMemphis LGBTQ+ Center believes Haynes to be the 32nd transgender woman murdered in 2020. The Human Rights Campaign (HRC) has reported her as at least the 34th name of a trans or gender non-conforming murder victim on their list, the highest at this point of a calendar year since 2013.

Further, WREG reports that murders in the Memphis metropolitan area are at an ‘unfortunate’ high.

“We have lost yet another Black trans woman to deadly violence in this country,” said HRC Director of Community Engagement for the Transgender Justice Initiative Tori Cooper. “Despite the fact that we are living through the coronavirus pandemic, transgender and gender non-conforming people are also still facing an epidemic of violence.”

Cooper continued, “We are also living in an extremely vitriolic period, where hate, prejudice, racism and transphobia are fueled by many in power. This is contributing to a rise in animosity and an increase in fatal violence against trans and gender non-conforming people. We need our allies to take action to support us today and every day. As we mourn Angel’s loss along with her friends and family, we will continue working for an end to this senseless violence.”

“Angel wasn’t only my best friend, she was my sister,” Weddle said of Haynes. “She was the only friend I had and now she’s gone.”

While there isn’t a publicly official or suspected reason behind her murder, Weddle suspects that her trans identity might be part of it, and that it’s likely that someone could harm her “just because she was the way she was.”

“Especially in that side of Memphis it was in Whitehaven, they really don’t like people like that over there, really,” she commented to ABC affiliate, Local Memphis.

Today I'm starting the #DontForgetHer campaign to remember the women lost to hate crimes and to urge the government to take action against this growing epidemic.

On Sunday, we lost Angel Haynes. Angel is #33. Today I spoke with her best friend Shinese who is heartbroken. #BTLM pic.twitter.com/odcxP6NxDa

A vigil was held for Haynes on the evening of October 30 by friends and family. There, they lit a number of candles laid out to spell “Angel” and released balloons.

A GoFundMe campaign was started to raise funds to help Haynes’ family pay for funeral and burial expenses, as their “time with her was cut very very short” and unexpectedly. While they refer to her former identity, organizer LeAnn Jones writes that “Angel was a carefree, caring, determined, funny, smart and giving woman.”

“Our Memphis community is mourning Angel Haynes this week,” the Transgender Law Center wrote in a tweet. “In a week of grief after anti-Black murders like that of Walter Wallace, Jr., we know Black trans folks are doubly carrying a heavy burden right now.”

The Memphis Police currently have no suspects. They ask anyone with information to contact their Crimestoppers tip line by calling 901-528-CASH.

At 2:19 am, offices responded to a shooting at the Motel 6 located at 1581 E Brooks. A female shooting victim was found and pronounced dead at the scene.
No suspect info is available. Call 901-528-CASH with tips.

Editor’s Note – This article was updated to include a statement by the Human Rights Campaign. You can read their full statement in regards to Angel Haynes’ death on their website.