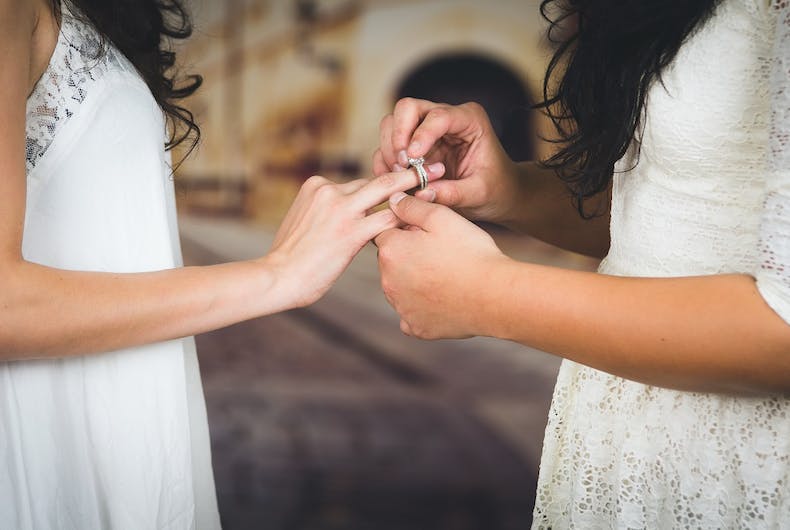 Nevada is one of many states that still has a ban on same-sex marriage on its books, years after the Supreme Court nullified it in its Obergefell v. Hodges decision.

This November 3, though, voters have the chance to show support for LGBTQ love by repealing this constitutional amendment. “Question 2” on this year’s ballot in Nevada, and it’s the only one of its kind in the U.S. this year.

The amendment would remove the language banning same-sex marriage from the state constitution and it has already been approved twice by the state legislature.

Now there’s just one more step for change: a majority of voters have to vote “Yes” on Question 2.

Oddly enough, it’s a couple of Karens — activists Karen Vibe and Karen Goodly — who for years have led the pro-LGBTQ charge to remove the amendment that was originally approved by voters in 2000 and 2002.

In 2012, the Karens started a challenge to Nevada’s ban that led them all the way to the U.S. Court of Appeals for the 9th Circuit in San Francisco. In October 2014, they won their case and they were the first same-sex couple in the state to get married.

Regardless, the women are a major force in the movement to get Nevada residents on board with getting rid of the useless ban.

“We have this little tiny detail in our constitution that changed 18 years ago, and now we need to remove that language to make sure we are abiding by our current laws,” Vibe says.

Nevada is among dozens of other states that have similar language in their state constitutions or statutory bans on same-sex marriage, even though they’re unenforceable under federal law.

Virginia, though, repealed its ban earlier this year.

For many LGBTQ folks, bans like these are legally benign but nevertheless an affront to human rights.

Nevada’s Question 2 also includes a stipulation that would allow for “religious organizations and clergy members to refuse to perform a marriage,” a legal protection already in place but that might calm fears that churches will face legal retaliation if they refuse to marry same-sex couples.

A win for Question 2 would remove the existing legal wording saying that marriage is only between a man and a woman and adding language to ensure that “all legally valid marriages” are “treated equally under the law.”

“This amendment helps to make sure Nevada remains committed to protecting civil rights for all of its residents,” the Karens wrote in a column for the Las Vegas Sun. “This last piece is the final change that is needed to truly keep our marriage legal and safe from discrimination.”

Is the Democratic Party heading straight into a looming midterm disaster?