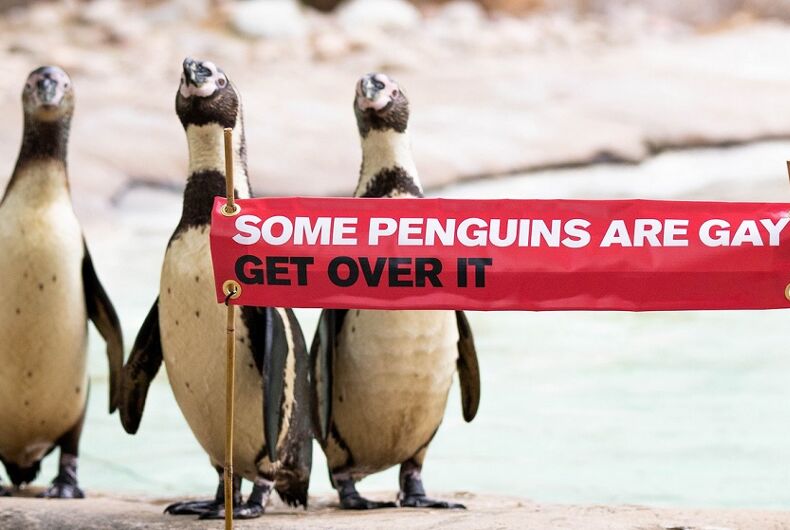 A pair of gay African penguins won’t stop stealing eggs from other penguin couples. This time the pint-sized parents-in-training have taken the whole nest.

While a pair of male Magellanic penguins at the San Francisco Zoo were deemed the best parents in the zoo, these two troublemakers won’t be getting the chance to snag the honor any time soon.

Related: Pair of inseparable ‘gay’ penguins to be separated and paired with females

The Dutch duo stole an egg last year, but it didn’t hatch. Sadly, this year they decided to eggsnatch from a lesbian couple, so none of the eggs will be fertile.

The “very determined” pair of penguins brazenly moved into the female pair’s enclosure, hustling them out of the space, and have spent their time since alternating between taking care of penguin business and sitting on the eggs. The male couple now has two nests.

“Maybe one day we will welcome a chick that has been hatched by a gay couple. Who knows, they might succeed next year,” Amersfoort Zoo’s Sander Drost said.

It’s so common for the birds to form same-sex couples, the London Zoo had a Pride festival for their penguins last year complete with a gay pride banner.

The banner was also in honor of a pair of penguins housed at the zoo, Ronnie and Reggie, who became a pair in 2014. They became known for adopting an abandoned egg. They later shared parenting duties after their chick, Kyton, was born the following year.

Next week’s #ZSLZooNights will be getting a #Pride makeover and our #penguins are joining in on the celebrations! 🐧🏳️‍🌈 Learn more about our Pride-themed activities at the Zoo & how you can join in: https://t.co/G62kM4oKGA ❤️💛💚💙💜 #PrideInLondon #ZooLife @PrideInLondon pic.twitter.com/zIFBFurnuR