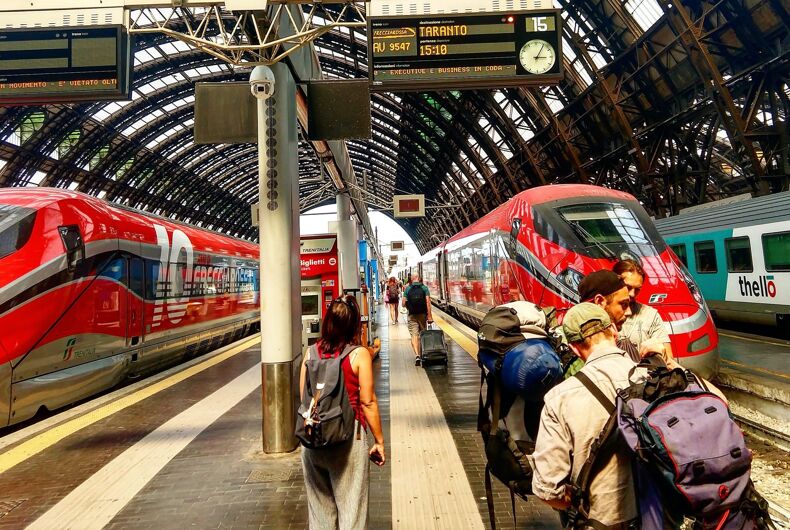 Michael and Brent catch a train in ItalyPhoto: Brent Hartinger and Michael Jensen

Three years ago, in part, because we were horrified by the election of Donald Trump, we left America to travel the world as “digital nomads” — working remotely and living in a series of different countries for two or three months at a time. Because of the COVID-19 pandemic, we returned to the United States last March. We’ve since spent the year traveling around our home country (while also socially isolating and distancing, natch).

But now we’ve decided to leave America again, and we’re probably never coming back, at least not to stay. And this time, the reason why hasn’t almost nothing to do with Donald Trump — not directly, anyway. It has to do with values, cars, materialism, lifestyle choices, and a possibly rabid bat.

A rabid bat? We’ll get to that in a minute.

We both grew up in America, and we thought we knew our culture well. But being back in America after living overseas for more than two years, we’ve seen the country with very different eyes.

And we’ve realized we really don’t want to live the way most Americans do.

For one thing, we absolutely hate America’s car-centric society.

And we rarely needed a car. Almost everywhere on this planet except in America, cities are pedestrian-friendly, with vast, integrated public transportation systems and vibrant, walkable city centers.

Since returning to the U.S., we’ve needed a car to go almost anywhere. Thanks to the pandemic, the traffic hasn’t been quite as bad as it used to be, but we know that as soon as it’s over, America will return to its status quo where most cities are a vast swath of strip malls, subdivisions, and urban sprawl choked by soul-killing congestion.

Americans say cars are “freedom.” But now we know that actual freedom is not needing a car.

American cities in general are not walkable, and they’re not people-friendly. For the most part, they’re corporate and generic, and increasingly, in an era of chains and big box stores, almost indistinguishable from each other.

Which makes sense, since the other thing that’s now incredibly obvious to us about America is its obsession with financial success and material things.

Why Spend Your Life Working Yourself to Death?

It’s true that before we sold our house in Seattle and left to become nomads, we worked hard and owned quite a bit of stuff.

Then again, almost everyone we knew did. Despite vacationing overseas from time to time, we didn’t really know anything different.

But now that we’ve traveled the world, we’ve seen what an incredible outlier America is. The fact is, most of the world doesn’t spend every waking minute working their lives away. They enjoy food and culture and music and family. They celebrate all the things that make life worth living.

In America, it’s “cool” for many people to be so busy you don’t have time to see your friends, at least in certain circles. It’s a status symbol! And everything in America is really expensive — housing, healthcare, education, owning and maintaining a car — so most people have to work their asses off whether they want to or not.

But in much of the rest of the world, attitudes are exactly the opposite. People think you’re an utter fool to spend your life working it away.

Even in the poorer countries we’ve lived in, the people don’t seem nearly as chronically tired and irritable — as miserable.

Which makes sense because families are often still more intact. Strong social networks have pros and cons, of course, especially for women and LGBTQ family members.

But from our current point of view, America has taken its obsession with “rugged individualism” to almost pathological lengths. Same for its ridiculous materialism.

And the result is the current epidemic of anger, anxiety, and depression. It’s so obviously connected, folks.

People in America often say they want “the simple life” — a life of authenticity and connection and personal satisfaction. But we’ve arranged our culture in ways that make that kind of life almost impossible to achieve.

And, okay, we’ll just say it: Americans simply don’t appreciate food the way the rest of the world does. Here the food is fast and loaded with fat, salt, and sugar.

But that’s just the tip of the iceberg. Two weeks of vacation a year? No actual lunch hour, just eating at your desk? Endless debt, especially over basic things like education and medical care?

Why would anyone choose to live like this if they didn’t have to?

The Bat that Broke the Camel’s Back

Which brings us back to the possibly rabid bat we mentioned earlier.

A month ago, we went out for an evening walk in Denver, and a bat fluttered up against Brent’s neck. There didn’t seem to be a bite, but bats can carry rabies, and this was very unusual behavior for the animal.

So we suspected Brent had to get the rabies vaccine, and the experts we talked to agreed.

Despite living overseas most of the time, we’ve kept our American health insurance (which hasn’t been cheap — about fourteen thousand dollars a year in premiums).

But we were in Colorado, and our legal residence, and our health care provider, Kaiser Permanente, is in Washington State.

Fortunately, Kaiser Permanente has facilities in Colorado, so we assumed everything would be fine. If only.

Instead, Brent spent at least six hours on the phone, trying to figure out where and how to get the series of four shots — and how much it would cost.

Finally, we had a vague price guarantee that wouldn’t completely bankrupt us, but only as long as Brent got the shots in “urgent care,” not an emergency room.

So far, so good. Brent began the series of shots, which must be given on a precise schedule. Unfortunately, we were going to be Helena, Montana, the day before the last shot. And it’s impossible to get a rabies shot anywhere in Helena except in an emergency room.

We called the emergency room to find out what it would cost, and they wouldn’t tell us. No, seriously, they absolutely refused. They claimed no one knew. At one point, Brent said, “Can you give me a ballpark? Two thousand dollars?”

“At least,” the person said with a chuckle. For one shot!

But something tells us they’d know exactly how many thousands of dollars to charge us after-the-fact.

In the end, we wound up delaying our flight from Denver by two days just to get that one last shot in the series — all to avoid paying thousands of dollars in extra costs.

Ironically, the week after Brent was done with his rabies series, an American friend in Mexico got bitten by a dog.

She immediately Whatsapped a local doctor and got her first shot the next day. The cost for the whole series? Because she isn’t Mexican, it will cost her $400, of which her travel insurance will pay $250.

Our final cost will be… well, we still don’t know, because they refused to tell us, but we’re fervently hoping it will come in at under $1000.

And we haven’t even gotten to the part where Americans are still fighting over whether to wear damn facemasks in the middle of a pandemic, and that our current joke of a president is refusing to say whether he’ll accept the results of the upcoming election.

So, yeah, we’re leaving America again. And we really doubt we’ll be coming back any time soon.