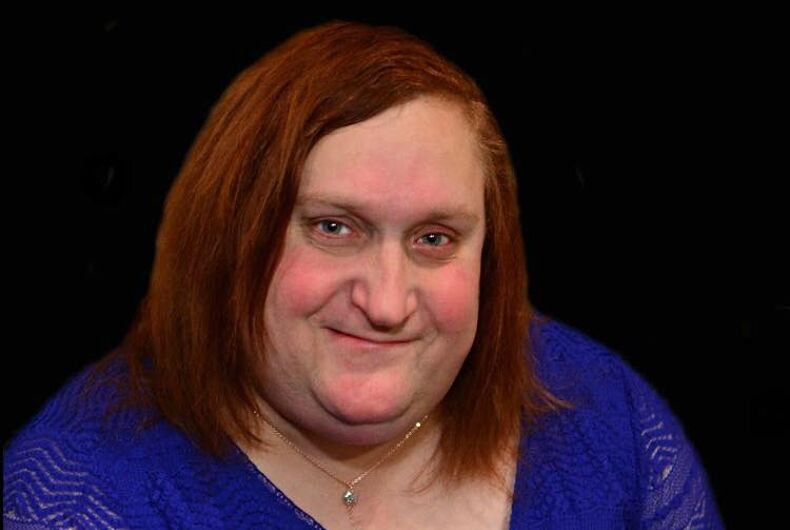 “It’d be such an honor,” she told LGBTQ Nation. “It really will be. But my campaign is focused on me being the better choice here than my opponent.”

Katzenmeyer is running against Republican Joe Sanfelippo, who has represented the district since 2013.

“The district has been misrepresented for so long,” Katzenmeyer said. “One of the common things I hear from my constituents is, our current representative doesn’t listen to us.”

Despite Sanfelippo’s long history in the district, Katzenmeyer is confident she has a chance.

“My district is considered a battleground district here in Wisconsin, a suburban district, and I’m facing off against a four-term, 8-year opponent, and with all the anti-Trump sentiment going on, it is going to be a close race this year. There is polling data showing me within the margin of error. This could actually be done.”

The historic nature of the campaign has garnered national attention.

“It’s been awesome,” she said. “When you have some 850 candidates running nationwide who are LGBTQ, that’s an honor for me. It’s really given me a boost of support. I’ve seen donations come in from all over the country.”

“It gives me more motivation to work that much harder.”

Katzenmeyer believes a victory for her would be a victory for “the beautiful LGBTQ people across my state and even in other states, too.”

“I hope to inspire many others within my community, especially trans people, to step up to the plate in the process. Because in the LGBTQ community, we don’t have enough representation – especially at the state level.”

Katzenmeyer was inspired to run after nearly dying from a staph infection last year. She felt so fortunate to have health insurance cover her $80,000 hospital bills, and she didn’t know what she would have done otherwise.

“I’m sure I would have gone to the courthouse the next day and filed for bankruptcy,” she said. “No one should ever have to worry about filing for bankruptcy or going into debt over medical bills. I believe healthcare is a human right.”

Especially during a pandemic, she added, it is crucial to have a leader who will prioritize health and safety. “We also need a leader who is proactive in stopping the spread of coronavirus and a leader, more importantly, who is going to listen to and fight for the needs of the people in this district.”

Katzenmeyer also hopes to prioritize access to mental healthcare, increasing funding for infrastructure and education, and legalizing medical marijuana, as she said doing so is currently more realistic than legalizing recreational marijuana. Her district, she said, has been hit hard by the opioid crisis, and she believes legalizing marijuana is a step to overcoming this challenge.

Katzenmeyer has a wide breadth of experiences that she believes make her more in touch with her constituents. She is currently a rideshare driver and also spent time as a musical theater and stage actress at the community theater level. She also worked for UPS for over twelve years, during which she spent three years on the UPS Employee Relations Committee, five years on the UPS Safety Committee, and three years as Secretary on the Teamsters Local 344 Political Legislative Committee.

“Having all of these different experiences shows I’m an average person,” she said. “I get a little tired sometimes [because] sometimes people think that being an elected official is all about money, and it’s not all about money. Because we have to represent everybody in our district.”

In the last few weeks before the election, Katzenmeyer wants voters to know that her top priority is to listen to them.