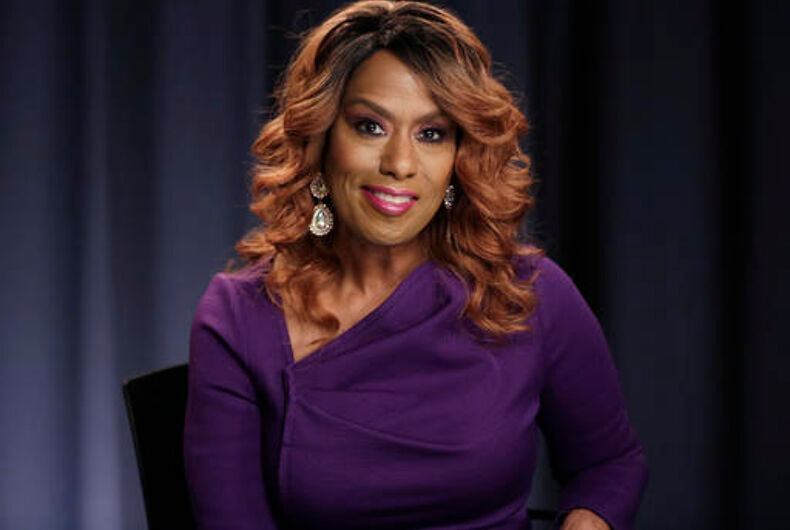 FILE - In this Oct. 7, 2016 file photo, actress and singer Jennifer Holliday poses for a photo during an interview in New York. Holliday, who will perform at Donald Trump's inaugural welcome concert next week, supported Hillary Clinton in the election and says her decision to participate is not a political statement.Photo: AP Photo/Richard Drew, File

LGBTQIA, and now D? Jennifer Holliday, one of the original Dreamgirls, has given it some thought.

“They keep adding initials to the LGBTQ,” the singer and actress observed during a recent appearance on Thomas Roberts’ Gay Good News program. “We’ve got LGBTQIA, and then I heard somebody say D.”

Related: Historical photos of men in love: The mischievous sailors

Holliday, who’s about to turn 60, said she thinks she knows what the D stands for, and it’s not Dreamgirls.

“If it’s Atlanta, it means down-low,” she told Roberts. “There’s a lot of people on the down-low in Atlanta.”

Wait, what? Did the government release a study? Does R. Kelly know about this?

Holliday, who found fame with her Tony Award-winning role as Effie White in Dreamgirls, didn’t say where she gets her information (although she does live in Atlanta). But she’s not the only person who’s noticed how much the alphabet has been put to use in describing sexual behaviors.

While some stick to four or five letters and possibly a plus sign, others now use half the alphabet.

One of the most comprehensive acronyms is LGBTIQCAPGNGFNBA. According to Serendipitydodah – Home of the Mama Bears, a blog and Facebook group for mothers of LGBTQ kids, it’s the world’s longest acronym used to describe sexual orientations and gender identities. The letters stand for Lesbian; Gay; Bisexual; Transgender; Intersex; Queer and/or Questioning; Curious, Asexual; Pansexual; Gender-Non-conforming; Gender-Fluid; Non-Binary and Androgynous.

For the record, D stands for demisexual, a term that refers to people who feel sexual attraction to another person only if they form a strong emotional bond or connection with that person first, regardless of sexual orientation. In other words, they need to be friends first.

That’s different from down-low, a slang term that started out referring to a subculture of Black men who identify as heterosexual but who secretly have sex with men. Oprah Winfrey gave the term exposure in 2004 when she interviewed author J. L. King about his memoir, On the Down Low: A Journey into the Lives of Straight Black Men Who Sleep with Men. It’s now used by more than the Black community. In a general sense, it refers to any activity or relationship kept discreet.  R. Kelly sang about a woman on the DL in “Down Low (Nobody Has To Know.)”

Other uses of letters include T or 2 for Two-Spirit (a person with both a feminine and a masculine spirit living in the same body, used by some Indigenous people); A for Allies; P for Polyamorous and G for Genderqueer. More and more, ‘queer’ is becoming a term that encompasses a wide range of sexual orientations and gender identities, making the acronym LGBTQ fairly inclusive. Other acronyms include GSD for gender and sexual diversity; GSM for gender and sexual minorities; and MOGAI for Marginalized Orientations, Gender Identities, and Intersex.

As for Holliday, the Texas native is straight but has been a longtime supporter of the LGBTQ community, raising funds for HIV/AIDS prevention and other causes. She says it started in the 1980s, when many of her male friends and colleagues in Dreamgirls died of AIDS.

Roberts had her on his Gay Good News program this year as an ally to the LGBTQ community. She also provided the theme song for his show, which he livestreams on Facebook to cover gay-oriented subjects that others don’t.

Holliday got her first role on Broadway in 1979 at age 19, in Your Arms Too Short to Box with God. Two years later, at 21, she originated the role of Effie White in the Broadway musical Dreamgirls, winning the 1982 Tony Award for Best Leading Actress in a Musical; a Drama Desk award, and a Grammy Award for “And I Am Telling You I’m Not Going.”

She stayed with the Broadway production for four years and then went on tour with the show. She’s also performed in Chicago and The Color Purple, among other shows, appeared on TV, and released gospel and R&B albums.

Despite her early successes, Holliday has battled obesity, clinical depression, and multiple sclerosis, which led to temporary blindness and some paralysis and forced her to suspend performing years ago. Now she’s in remission for MS and had resumed acting and giving concerts before the COVID-19 pandemic shut down most live performances. In July, she sang during the funeral service for Georgia Congressman John Lewis.

To celebrate her 60th birthday on October 19, Holliday is joining with AIDS Healthcare Foundation and the Black Leadership AIDS Crisis Coalition (BLACC) to put on a virtual concert that will raise funds for the Healthy Housing Foundation, a national organization that provides affordable housing for low-income families. General admission tickets cost $20, and a $60 VIP ticket includes a virtual Meet-N-Greet.

During the 90-minute “party with a purpose,” which will stream on Goldstar.com starting at 8 p.m. EST, Holliday will perform hits from Dreamgirls and other songs and pay tribute to the late Aretha Franklin. She’ll also hear messages from celebrities including Winfrey, Whoopi Goldberg, Mariah Carey, Loretta Devine, and Sheryl Lee Ralph, the last two of whom were in the original Dreamgirls cast with her on Broadway.