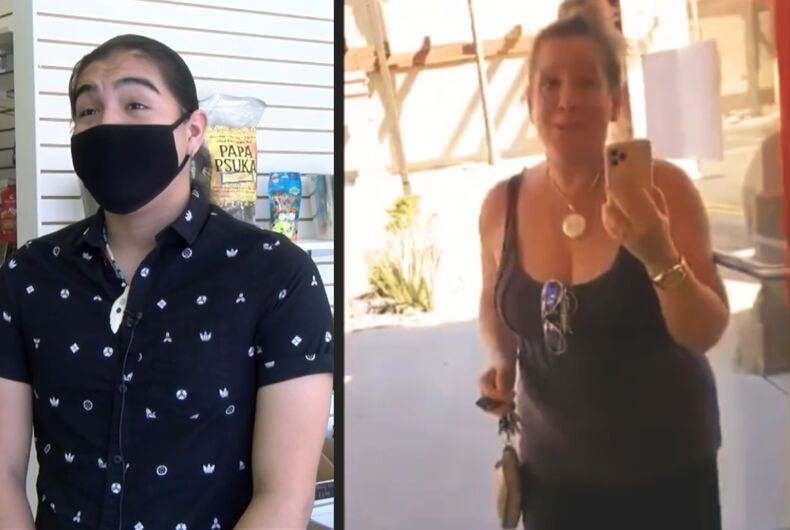 Aidan Bearpaw, an employee of Bones-N’-Scones in Palm Springs, California, was at work last week when he was dragged into the latest viral encounter.

A woman attempted to shop there, but wasn’t wearing a mask and refused to put one on. The “Pet Store Karen,” as the internet has begun calling her, cited her “religious exemption right and God-given right to breathe O2 not CO2” in addition to supposed protections under the Civil Rights Act of 1964.

Needless to say, not following a local ordinance to wear masks in public places is not a protected act and is not considered discrimination. Masks do not damage your health or inhibit the ability to breathe oxygen (or surgeons and construction workers would be dying every day from it).

Bearpaw denied her entry, and in a six-minute viral video that he posted on Facebook Live, recorded her refusal to put on a protective mask to enter the store. Despite explaining that this was in accordance with the law, the woman called the police.

Luckily for Bearpaw, the 9-1-1 dispatcher told the caller that she had to follow the mask-wearing rule per the city ordinances. The “Karen” then left – but returned the next day, upset that the footage of the confrontation went viral.

“My bosses were initially furious,” Bearpaw was quoted as saying in the New York Post. “It was very possible I was going to be fired. My co-workers were all very supportive and made it clear there would be consequences if I was terminated.”

Luckily, he had General Manager Jay Smith, in addition to his co-workers, in his corner. Now the company is proudly standing behind him.

“Aidan won for all of us,” Smith said in an interview with KESQ. “He didn’t just win for Bones-N-Scones, he won for the city of Palm Springs, for the United States and for humanity in general.”

Several customers have come to the store since, to thank Bearpaw and take pictures with him.

He concludes, “It worked out in the sense that, you know, I was able to keep myself safe, and whatever customers were going to come, that we’re going to come in safe.”

Outside of work, Bearpaw has been in a relationship for 3 years. He is an indigenous artist and “dog dad.”

He described the ordeal as anxiety-inducing, but his partner had something more forward to say in an Instagram post:

“You wouldn’t know discrimination if it was happening in front of you. It’s a shame that some Americans feel so entitled to not have to practice basic public health safety guidelines,” they wrote.

KESQ reached out to the woman and tried to confirm her identity, but have not received a response yet.

Rediscovering the queer history of the American South