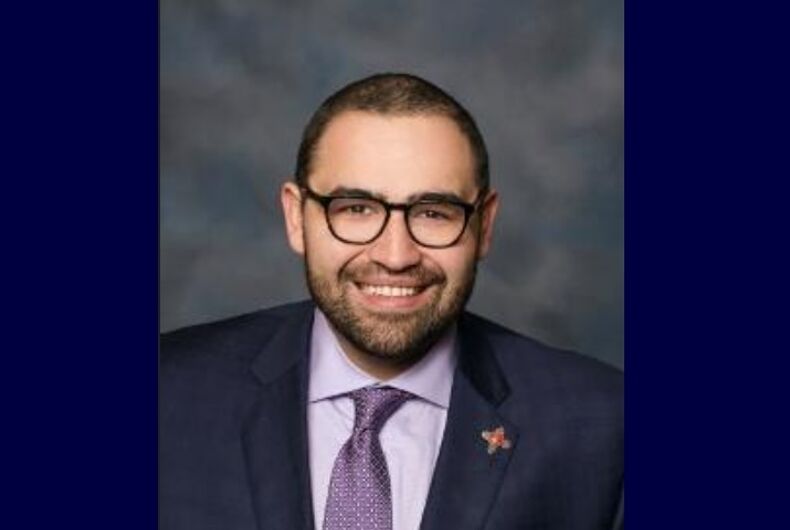 An out gay lawmaker has fled his home with his husband after receiving threatening and homophobic phone messages.

“I have no idea how I can keep my family safe right now other than leave,” New Mexico state Sen. Jacob Candelaria (D) told the Washington Post. “They do not have the right to make death threats like this and have it go unaccountable.”

Caldelaria and his husband left their home in Albuquerque and are staying outside the city but within the state, following what he called an “inadequate” response by police.

He started receiving messages when he made statements in favor of COVID-19 precautions taken by New Mexico Gov. Michelle Lujan Grisham (D). Protestors on Saturday demonstrated against the measures, demanding the governor lift the restrictions put in place to fight the pandemic, which include bans on gatherings of more than five people and a mask mandate.

Caldelaria appeared on television and rebuked the protests as risky and defended the coronavirus prevention measures. And that’s when he started getting the threatening messages.

One of the messages said: “We’re going to get you out one way or another.” Another used anti-gay slurs. Caldelaria was able to trace one of the phone numbers to a man who has an outstanding warrant for his arrest.

He said that police took 12 hours to respond when he called them and then suggested that the messages weren’t necessarily threats. He said that after credible threats made against Michigan Gov. Gretchen Whitmer (D), law enforcement should be taking these threats more seriously.

“Who I am as a senator, who I am as a gay man, and the political positions I take are all part of that context,” he said. “As is the increase in threats of violence against Democratic and progressive elected officials by white nationalist groups.”

“None of those factors was taken into consideration here.”

A spokesperson for the state police said that his case is being handled and the police’s initial response is being reviewed. The Albuquerque Police Department said that an officer would drive by his home periodically to check for suspicious behavior.

Caldelaria said that he has been working remotely this week but his husband, who is a doctor, has not been able to return to work.