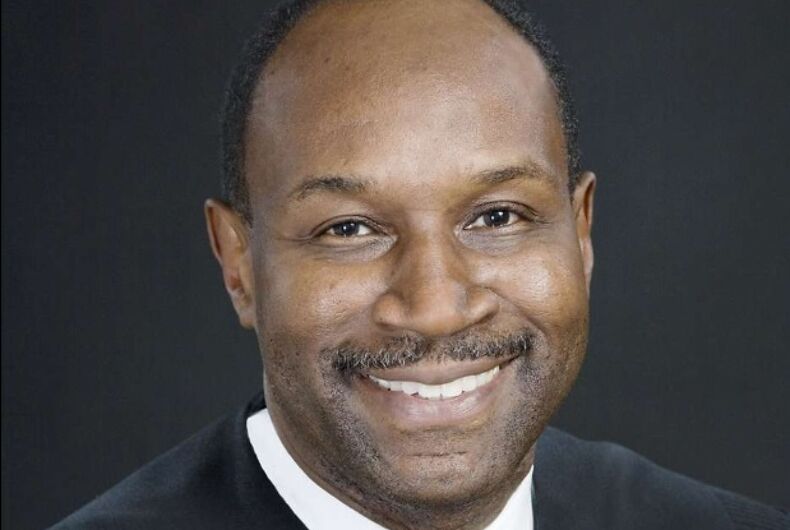 California Gov. Gavin Newsom (D) just nominated former state appeals court judge Martin Jenkins to the California Supreme Court. Jenkins would be the state’s first out gay justice on the state’s supreme court, as well as the fifth Black person to serve on the court.

“As a critical member of my senior leadership team, I’ve seen firsthand that Justice Jenkins possesses brilliance and humility in equal measure,” said Newsom in a statement.

Jenkins is originally from San Francisco and he attended Santa Clara University before playing football professionally for the Seattle Seahawks. He then attended law school at the University of San Francisco School of Law and worked as a prosecutor, a private attorney, and with the Civil Rights Division at the U.S. Department of Justice before he got his first judicial appointment in 1989 to Alameda County Municipal Court.

He rose through the court system and was even a federal court judge during the Clinton administration before returning to state courts.

“I have never seen a harder-working and more dedicated judicial officer in my entire career,” said retired U.S. District Judge Thelton Henderson. “Nobody stayed in the office later than Marty. He was intensely aware that real people’s lives were affected by his rulings and wanted to make sure he got it right.”

In an interview with The Advocate this week he said that “it’s an interesting notion” to be the first out LGBTQ person nominated to the state’s highest court.

“Being the first, and being an African-American man too, is a big responsibility,” he said. “I think I know how being in the minority feels, and so my plan is to do the job as well as I can. Hopefully, I’ll have the ability to shine a light on the possibilities for people who look like me or have the same orientation as I do. I think it’s also important to make sure you conduct yourself with honor and integrity with the way you do your work.”

He talked about how difficult it was to come out to his father – his mother passed away nearly 30 years ago, before he could come out to her.

“My dad got up from the couch across from where I was sitting, walked over to me, put his hands on each of the arms on the chair I was sitting in, and said, ‘How long have you known this?’” Jenkins recounted. “I told him that I had these feelings since high school, and he said, ‘I wish you had told me then. It couldn’t have been easy for you. I love you. You’re my son. There’s nothing you could do or be that would make me love you less.’”

“I compartmentalized in college, when I went to the NFL, through law school, through all of it, and in my mind, I wasn’t gay for a long time,” he said, explaining that he tried to suppress his feelings.

Today, he’s in a loving relationship with his partner.

“He’s a wonderful man,” Jenkins said. “And when I was finally able to be authentic about who I was, he showed up like a miracle. I fell in love for the first time late in life. I denied myself for so long. And now I’m happy.”