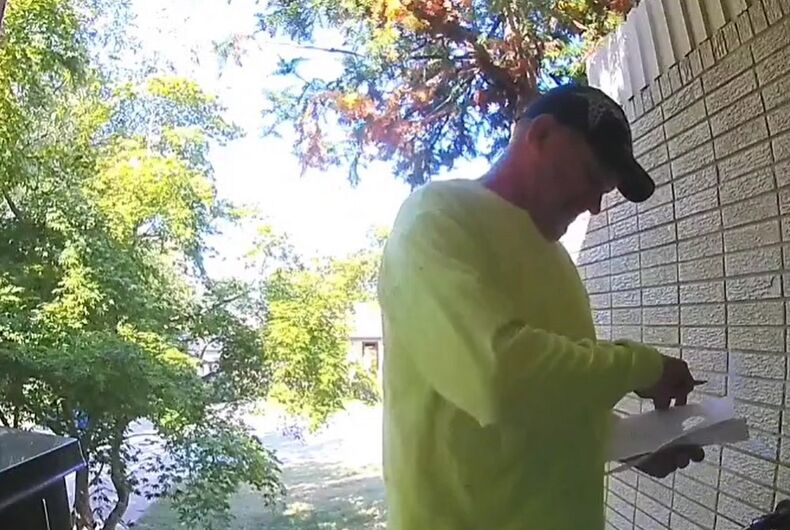 A city contractor who was caught on camera making hateful comments about a gay couple – calling them “dope smokin’ queers” – has been fired.

Bobby Elder said that the incident happened last Friday as contractors for the city’s water department worked outside of his home in Tulsa.

Related: Anti-LGBTQ street preachers broke a man’s leg after he confronted them about vile hate speech

“I’m used to them working out there and always been very friendly in passing,” he told KTUL, saying that’s why he was “really shocked by what I heard on Friday.”

One of the contractors went up to the door of his house, where Elder lives with his partner. His partner answered the door and the contractor informed him that the water would be turned off for some time for repairs.

It was an uneventful interaction until Elder’s partner closed the door: “Unfortunately, it was what we heard, and also much more.”

The couple then reviewed footage from a security camera and found that the contractor made homophobic comments about them when he thought that no one could hear him, as he was walking up to their house.

“Oh, this is a whole house full of ’em…. Bunch of dope smokin’ queers,” he can be heard saying on video Elder posted to Facebook.

“Heeeeeeeey,” he said, waving his arms around. “We’re gonna shut your water off at 8:30. Get all your group showers done by then.”

“I’m a queer,” he said in a sing-songy voice as he waited for the couple to answer the door.

‼️UPDATE‼️the guy was a contractor for Hensley construction, hired by the city of Tulsa to work in my neighborhood. The…

Elder said that he didn’t even understand why the contractor would say that about him and his partner.

“That’s what I think hurt so bad was how playful he was when saying it, how it was just a joke,” he said.

The city of Tulsa issued a statement saying that the worker in question was “not a City of Tulsa employee.”

“The City has talked to the contractor and this individual was removed immediately from all City projects,” the statement said.

Elder said that his goal wasn’t to get the man fired, just “to show what so many people in the LGBTQ community go through.”

“But I do believe that all actions have consequences,” he said.