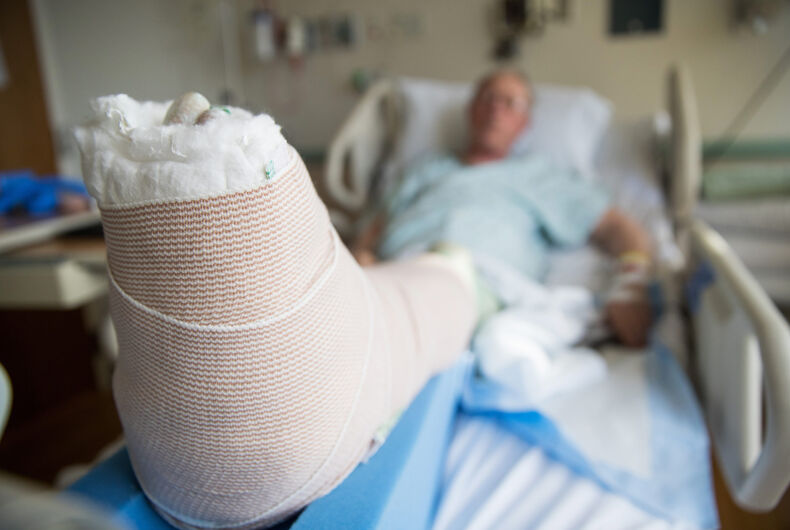 Anti-LGBTQ street preachers are accused of throwing a man to the ground and breaking his leg, giving him injuries that will require him to have metal plates in his leg permanently.

Justin Morissette, who is locally known because he’s a host on the radio show Sportsnet 650, said that he was going to a date in Vancouver’s West End – home to the city’s historic LGBTQ neighborhood – this past Saturday night when he saw “anti-gay evangelical bullies” with megaphones and sound equipment.

Related: Gay man beaten by mob who recognized him from grocery shopping with his boyfriend

Morissette tweeted about the encounter, where he said one of the street preachers “purposefully broke my leg.”

“My leg is super fucked up, and that sucks,” he wrote. “But the violent man who did this to me would have done it, or possibly much worse to someone else down the line had he not been arrested tonight.”

The attack occurred not far from his apartment, and his roommate J.D. Burke told the Vancouver Sun that he heard what was happening from their home.

“I sprinted from my place to the corner to go be with my friend and as I get there — it felt like this all happened in basically an instant,” said Burke.

“Justin goes to turn the volume down on the monitor… and they block him. I can’t stress enough how loud their set up is. So that tug of war for the microphone turned into the preacher Judo-slamming Justin to the ground.”

I’m only tweeting about this because there have been too many instances of unchecked racism and during the pandemic, videos of people spewing hate while everyone just sits there and ignores it. Do not allow yourself to do that. That behavior is not welcome in our communities.

Do not allow yourself to be a passenger to someone else’s abuse. I am in excruciating pain and my knee is incredibly mangled. But I would feel worse if I knew I saw that and just went home and minded my own business. Don’t let the bastards win.

Police confirmed that there was “a disturbance” at the location when someone confronted the street preachers, who were “preaching about religion and anti-gay chants.”

“The individual is suspected to have been thrown to the ground, where they unfortunately broke their leg,” a police spokesperson said in a statement.

Police arrested two of the street preachers and said that they could face charges of aggravated assault and mischief. The Vancouver Police Department’s hate crime unit is also reviewing the case.

Neighborhood resident Stephen Wahl told CTV News that he has called the police several times on the street preachers, saying that their hate speech made violence “inevitable.”

“I was horrified, but not surprised, and I’m sad that it had to come to this, but I knew it was inevitable,” Wahl said. “This is inflammatory stuff. It was only a matter of time. Every week something like this happens. People get upset, they’re inflamed, they’re provoked.”

On Twitter, people posted about how the street preachers spread their hate in different neighborhoods.

We tried to drown out his hate speech down by English bay. I guess they just moved to the heart of Davie Street. Sadly the @VancouverPD just stands there while we get verbally assaulted weekend after weekend by these people. pic.twitter.com/FTulSsx2Oe

CTV News reports that the same group of street preachers were in another neighborhood last weekend. When a man confronted them there, they held him down. He walked away.

The police are looking for more witnesses to the attack.