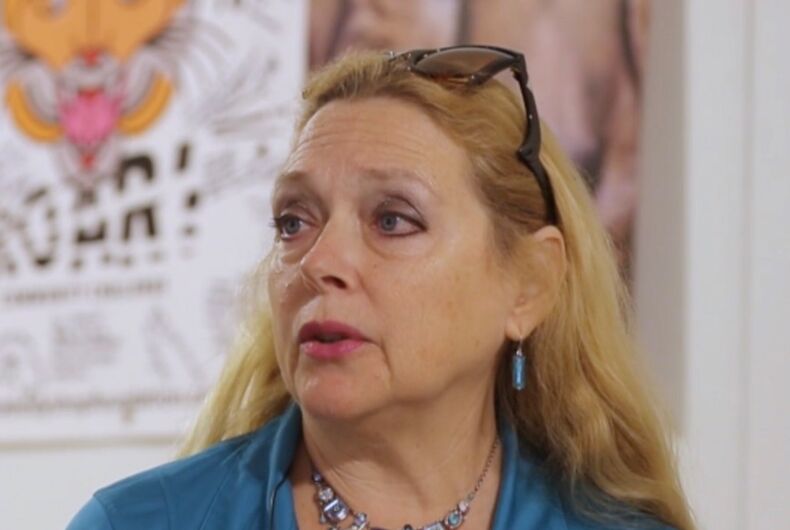 Animal advocate Carol Baskin – one of the breakout stars of the Netflix miniseries Tiger King – said that she has “always considered [herself] to be bisexual.”

Baskin, 59, operates the Big Cat Rescue in Florida and recently appeared in season 29 of Dancing with the Stars. Earlier this year, the documentary series Tiger King prominently featured her efforts to care for lions, tigers, and other big cats, as well as out gay roadside “zoo” owner Joe Exotic’s hatred of her.

Related: “Tiger King” presents Saff as a butch lesbian during the entire show. He’s not.

She said that she was briefly engaged to a psychologist in the 1980s who worked with LGBTQ people, which helped broaden her awareness of her identity. Before that, she just saw herself as a “tomboy.”

“I was always very male-oriented in the things I did,” she told PinkNews. “I never had any mothering instincts or anything, you know, I never played with dolls. And so I always thought that there was something off there, that I couldn’t quite put my finger on.”

“But it was during the 80s that I discovered that through dealing with the LGBT+ community that I [realized] I had just as equal feelings for women as I did for men.”

“I have always considered myself to be bisexual. Even though I’ve never had a wife, I could just as easily have a wife as a husband. As far as the way I feel about us, I think we are all one and I just don’t see us as being different genders or different colors or anything.”

When asked whether she thought Exotic – the former operator of the Greater Wynnewood Exotic Animal Park who is now in prison for attempting to have Baskin killed – was an embarrassment to LGBTQ people, Baskin said that he is “an embarrassment to the human community.”

“It’s not a matter of what your sexuality is, this man is just a deviant in the way that he treats human life and animal life,” she said.

Baskin just made Tiger King that much more queer. Exotic’s husbands Travis Maldonado, John Finlay, and Dillon Passage all appeared in the docuseries, and Exotic’s former employee Saff is transgender.