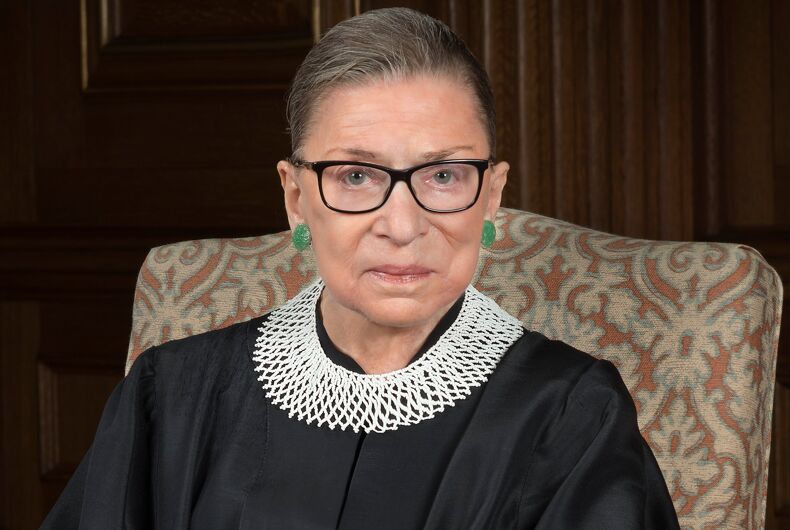 Like so many Americans across the country, I too am mourning the news that Justice Ruth Bader Ginsburg has died due to complications from metastatic pancreatic cancer.

She was 87. As a soft-spoken firebrand and feminist icon, Ginsburg leaves a titanic influence on the law, a legacy unmatched by any other jurists. As a feisty octogenarian on the Supreme Court bench, Ginsburg earned the moniker “Notorious R.B.G.,” a play off the deceased rapper Notorious B.I.G.

And, as a pop-cultural phenom, her image as the “Notorious R.B.G.” is on T-shirts and coffee mugs. A 2018 film On the Basis of Sex, depicting Ginsburg’s life as an attorney has inspired a new wave of young feminists to follow in her footsteps.

Ginsburg followed in the footsteps of a legal giant, too. Ginsburg was called the Thurgood Marshall of the 1970s women’s movement.

Referring to Marshall in a September 2014 interview in The New Republic, Ginsburg stated, “He was my model as a lawyer. You mentioned that I took a step-by-step, incremental approach; well, that’s what he did until he had those building blocks to end separate-but-equal. ”

One of Ginsburg’s famous dissents was the 2007 case of Ledbetter v. Goodyear Tire & Rubber Company. Lilly Ledbetter argued that she was paid less than male colleagues because of her gender, saying that violated Title VII of the Civil Rights Act of 1964. The Court sided with Goodyear, saying that Ledbetter should have filed her lawsuit within the first six months after her first unequal paycheck, not years later when she found out she was being paid less.

Ginsburg wrote the dissenting opinion, stating, “Pay disparities often occur, as they did in Ledbetter’s case, in small increments; cause to suspect that discrimination is at work develops over time. Comparative pay information, moreover, is often hidden from the employee’s view.” In a bold move, Ginsburg read her dissent publicly from the bench.

Ginsburg’s lens on justice was intersectional before the word became popular because of her identity with a persecuted group, citing her Jewish history and the Holocaust.

“My heritage as a Jew and my occupation as a judge fit together symmetrically. The demand for justice runs through the entirety of Jewish history and Jewish tradition. I take pride in and draw strength from my heritage,” Ginsburg said in a 2004 speech at the U.S. Holocaust Memorial Museum.

Ginsburg’s death comes as a crushing blow to those of us who believe in building a multicultural democracy and a participatory government.

As Ginsburg is laid to rest, a fierce fight is unfolding over her successor at a time of intense political polarization and with just weeks away from the presidential election. However, in her final days, Ginsburg told her granddaughter Clara Spera: “My most fervent wish is that I will not be replaced until a new president is installed.”

As this battle ensues, over the weekend, thousands of women, myself included, gathered at vigils that took place across the country to mourn and celebrate the life and work of this feminist icon and trailblazer. Ginsburg’s 27 years on the nation’s high court as a preeminent litigator played an epic role in advancing women’s rights, gender equity, and civil rights. She was a voice for all Americans.

She died on the eve of Rosh Hashanah, the Jewish new year. According to Jewish tradition, a person who dies on this High Holiday is a “tzaddik,” a person of great righteousness.

Ginsburg was also a humble person who exuded a quiet grace. In a 2015 interview with MSNBC, Ginsburg said she “would like to be remembered as someone who used whatever talent she had to do her work to the very best of her ability. And to help repair tears in her society, to make things a little better through the use of whatever ability she has.”

Ginsburg’s advocacy for justice was unwavering and she showed it, especially with each oral dissent. In another oral dissent, Ginsburg quoted a familiar Martin Luther King Jr. line, adding: “‘The arc of the universe is long, but it bends toward justice,’ but only ‘if there is a steadfast commitment to see the task through to completion.'”

Like the outstanding Americans we have lost in the last couple of months – Civil Rights icon Congressman John Lewis and Black Panther star Chadwick Boseman – who bent the moral arc toward justice, Justice Ruth Bader Ginsburg did, too.