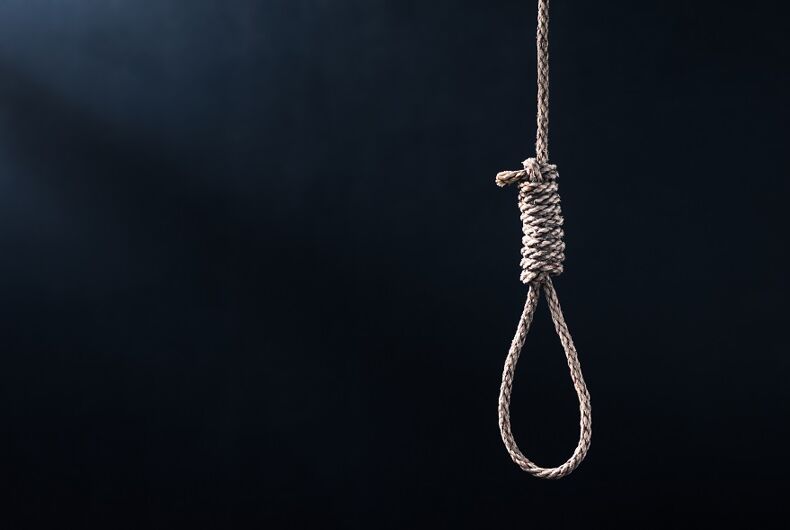 A Christian organization in the Cayman Islands was caught calling for LGBTQ people to be hanged “in a loving way,” and now the governor is calling for calm on “both sides,” as if LGBTQ people were at fault for the death threats.

Two weeks ago, messages sent between members of the Christian organization Cayman Caribbean Cause were leaked to the press. The British Overseas Territory has been debating marriage equality and civil partnerships for the past two years.

In one message, a Christian staffer wrote that the Cayman Islands should “maybe hang one or two [gay people] in a loving way” as a warning to other LGBTQ people.

“If this was a Muslim country, they’d be [thrown] out by the thousands,” he wrote.

In other messages, the staffers discussed ways to manipulate comments sections on a newspaper website and shared a photo of a lawmaker who met with a member of an LGBTQ organization.

This past Friday, Cayman Gov. Martyn Roper spoke out about the messages at a press conference, calling them “quite shocking.”

“I’ve seen a number of comments made on WhatsApp in recent days about the Civil Partnership Bill that I feel are deeply irresponsible,” he said. “In fact, I find them quite shocking. The worst ones have been referred to the police to look into.”

He called on “both sides of this debate to lower the temperature,” although he did not say what LGBTQ advocates had done that was comparable to death threats.

“Please think twice before posting anything on social media that would offend others in our community.”

Roper then stated his support for an imam who responded to the WhatsApp messages by telling people to love the sinner but hate the sin.

“As a Muslim, I may not adhere to or concur with the ideologies of the LGBTQ community, but as a human being living together with such people, it is my responsibility as someone who loves the creator to also love his creation,” said Cayman Imam Tahir Chaudhry. He responded because the messages discussed how LGBTQ people are treated in “a Muslim country.”

“I think the Muslim Imam Mr. Chaudhry in an interview with the Compass yesterday, I thought he put it incredibly well,” Roper said. “I found it actually quite inspiring.”

In a statement on the leaked messages earlier today, Bishop Nicholas Sykes, a member of the Christian organization, said that the WhatsApp group is “a fine chat group” while denying knowledge of the violent messages.